Consuming in the Global Marketplace

In a global economy the world seems a lot smaller. Not so long ago, products from foreign places seemed exotic and unusual. In the early 21st century, the United States is the world’s leading consumer of manufactured products from around the globe. Check the tags on your clothing, textiles, cookware, and electronics. How often do you see «Made in USA?» 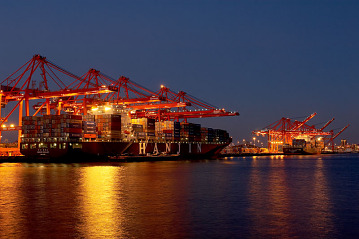 Courtesy of the Port of Long Beach

Container ships are a major part of this shrinking world. They carry enormous quantities of products and materials that end up in stores near you. In 2006 alone, about 18 million containers stuffed with cargoes of all sorts were sent on more than 200 million trips by sea, rail, and road to places around the world.

How much stuff fits in a single container?

How long does a voyage take?

What happens when the ship arrives in the United States?

What does the United States send back?

Courtesy of the Port of Tacoma