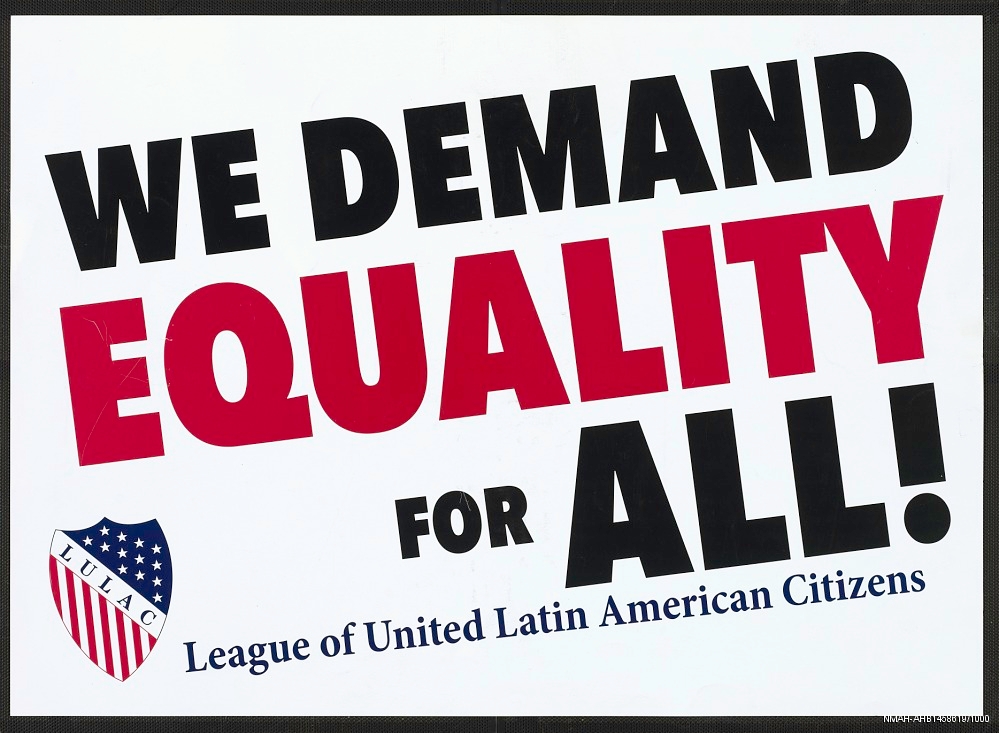 The War and Latina/o Philanthropy Initiative is a community-centered collecting project at the National Museum of American History, with support from the Smithsonian Latino Center. This initiative explores how Latina/o communities have given time, money, and goods during or in the aftermath of wars affecting the United States and Latin America. Focusing on the experiences of individuals and community-based organizations, the project explores how Latina/os understand and use their power to create effective change through giving.

Latina/o philanthropy has captured the attention of research institutes, scholars, and philanthropic organizations. Numerous published studies, including those conducted by the Urban Institute and Hispanics in Philanthropy, have shown that Latina/os have a long cultural tradition of giving in ways that do not always mirror mainstream American philanthropy. In order to understand how Latina/os have expressed their love of humanity, the War and Latina/o Philanthropy Initiative recognizes diverse forms of giving as essential characteristics of the history of philanthropy in America.1

Latina/os define giving in distinct ways that draw on political beliefs and cultural values of humildad (humility), confianza (trust), and personalismo (personalism). Preferring and trusting in giving within their own communities, Latina/os have a strong tradition of informal aid through family and community networks. While some provide housing and food to Latina/o newcomers, others send clothing and money to home countries via friends or relatives. They have also supported one another through community-based organizations, including churches and mutualistas, or mutual-aid societies.2

If Latina/os have a long tradition of giving, why is the project focusing on war? War has catalyzed philanthropy within Latino communities from the 19th to the 21st century. In the late 1800s, Mexicans established mutualistas throughout the U.S. Southwest to provide moral, legal, medical, and material support for their communities. Mexican migration, spurred by the Mexican Revolution (1910–1917), reinforced mutualistas as key organizations to ease migrant transition and settlement. Many white Americans responded with hostility to the increasing presence of migrants, regardless of citizenship status, resulting in discriminatory actions toward Mexican Americans. For some Mexican veterans of World War I, these injustices insulted the patriotism and sacrifice they displayed on the battlefield. As a response, middle-class community members and veterans formed the first leading Latino civil rights organizations in American history, the League of United Latin American Citizens (LULAC) in 1929. Since the 1930s, LULAC has worked to challenge human rights violations and inequalities facing Latino communities in the United States, including providing educational scholarships and services for older people and people who are blind or have low vision.3

World War II spurred the nation’s philanthropic spirit which expanded with ongoing effects after the war. With the need of resources and millions of troops in battle, Americans contributed time, money, and labor toward the war effort. Women of Mexican descent collected tin and scrap metal, formed letter-writing groups to boost soldier morale, and sewed seashells on soldiers’ uniforms when buttons were not available. According to Theresa Casarez of Austin, Texas, her mother held wakes in her home for military families that could not afford formal services or were not allowed in local funeral homes due to segregation practices. Such was the case in 1949 in Three Rivers, Texas, where fallen Mexican American soldier Felix Longoria was refused burial service in his hometown funeral home because according to the owner, “whites wouldn’t like it.”4 Women in his family turned to veteran and community physician Dr. Hector P. Garcia of Corpus Christi, Texas, who successfully garnered the support of Texas Senator Lyndon B. Johnson. After securing Longoria a highly honored burial at Arlington National Cemetery, Garcia and other Mexican American veterans used their emerging national presence to continue supporting civil rights, veteran rights and benefits, and veteran healthcare through their organization, the American GI Forum (established in 1948). To this day, the AGIF continues to support the needs of Latina/o veterans across the United States and Puerto Rico, including awarding educational scholarships for Latina/o youth.5

In the Cold War era, Americans embraced a powerful international mission that centered on the concerns of humanitarian crises caused by global war. For Cuba, political and economic conflicts erupted into a full-blown Cuban Revolution (1953–1959) led by anti-capitalist leader and former lawyer Fidel Castro against U.S.-backed military leader and president Fulgencio Batista. After defeating Batista through guerilla warfare, Castro established a communist government in Cuba. The new regime targeted Batista supporters for executions, causing large numbers of former military and government personnel to flee Cuba, including upper- and middle-class folks. Known as the Golden Exile (1959–1962), this period also witnessed the monumental humanitarian mission Operation Pedro Pan (1960–1962), the largest exodus of unaccompanied minors in the history of the Western hemisphere. With Castro’s consolidation of power and strategic focus on youth to ensure the maintenance of communism in Cuba, some parents feared their children’s indoctrination to unwanted ideologies through nationalized programs and institutions. James Baker, headmaster of an American school in Havana, reached out to Father Bryan O. Walsh, director of the Catholic Welfare Bureau in Miami, Florida, to organize the transport and refuge of Cuban youth to Miami via student visas. Under their partnership, and with cooperation between underground networks, families in Cuba and abroad and the U.S. government contributed to the transportation of 14,000 unaccompanied Cuban youth to Miami in less than two years. Walsh’s Cuban Children’s Program, welfare agencies, and resident families in the United States provided care and shelter for them, and some were eventually reunited with parents who migrated later. Instability in Cuba increased through Castro’s rise to power, ultimately resulting in multiple migration flows to the United States.6

The ’50s and ’60s were also troubled with civil conflicts in the Dominican Republic and economic downturns and labor shortages in Puerto Rico. Like some Cubans, Puerto Ricans and Dominicans joined family and kin who had migrated earlier and formed communities primarily in Florida, New York, and Chicago. Besides receiving help from family and friends, these new migrants and refugees sought services, advice, and emotional and spiritual support from mutualistas and churches. These sites also served as centers of gathering and giving toward their own communities and those back home. In fact, studies have shown that in 2013, 78% of all migrant remittances from the United States went to Latin America and the Caribbean, totaling $54 billion.7

Since the 1970s, tumultuous regional conflicts and economic instability in Central and South America have tripled the number of immigrants, refugees, and asylum seekers in the United States. Consequently, U.S. military intervention in Latin America during the 1980s triggered dissent from the American public. While most immigrants from Nicaragua, Honduras, Guatemala, and El Salvador have turned to their South American neighbors for refuge, concerns of safety from violence, displacement, and economic necessity drove some to make the United States their home. Relying on their connections to family and friends, or the mere presence of large Latina/o communities, most have found homes in California, Texas, Florida, and along the East Coast, including the DC/Maryland/Virginia region. While some newcomers have depended on family and kin for food, shelter, and employment opportunities, a host of nonprofits and foundations aimed to better their conditions, and the services provided for Central and South Americans have increased since the 1980s. Given the health risks associated with trauma and their importance as a fundamental human right, medical services have been a priority for many. In the Washington, D.C., region, for example, Salvadoran immigrants and U.S. health advocates founded La Clinica del Pueblo as a free and affordable community health clinic for immigrants and refugees in 1983, and it remains a vital resource in Latina/o communities with support from numerous donors, including LULAC.8

With the continued growth in Latina/o populations in the United States, the efforts of Latina/o philanthropy have continued to progress and succeed on multiple levels. Notable figures such as Lin-Manuel Miranda and José Andrés have captured public attention with their giving through the arts and food. Meanwhile, community foundations and national organizations such as Hispanics in Philanthropy remain integral to shaping the present and future of Latina/o philanthropy.

To this end, this project is collaborating with Latina/o communities in Washington, D.C., Florida, and Texas through community outreach and public programs to enrich museum collections and future exhibitions that center diverse forms of Latina/o giving. Reach us at philcollections@si.edu if you have stories of Latina/o philanthropy you would like to share.

Conflict and HumanitarianismLatina/os and Philanthropy