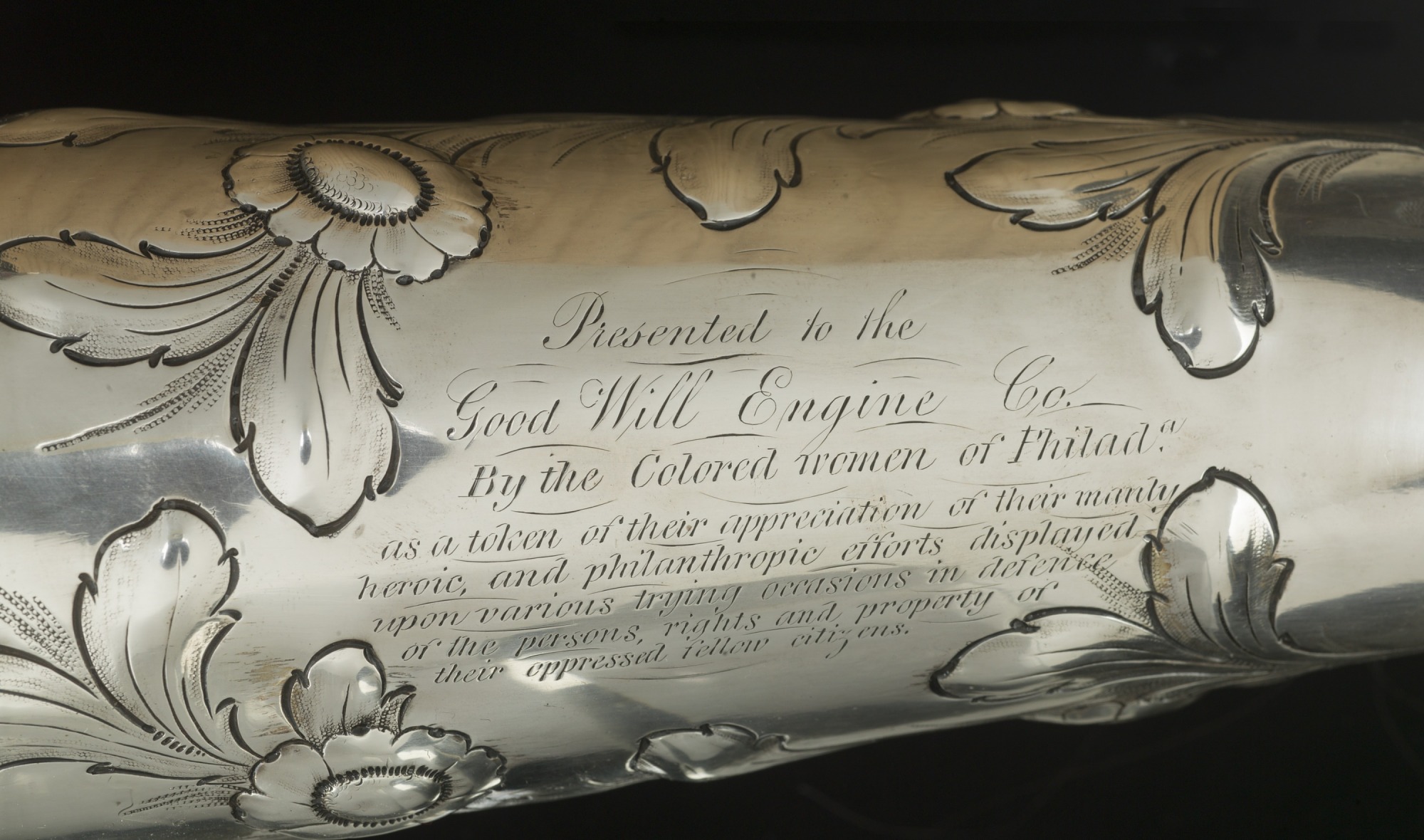 By Amanda B. Moniz 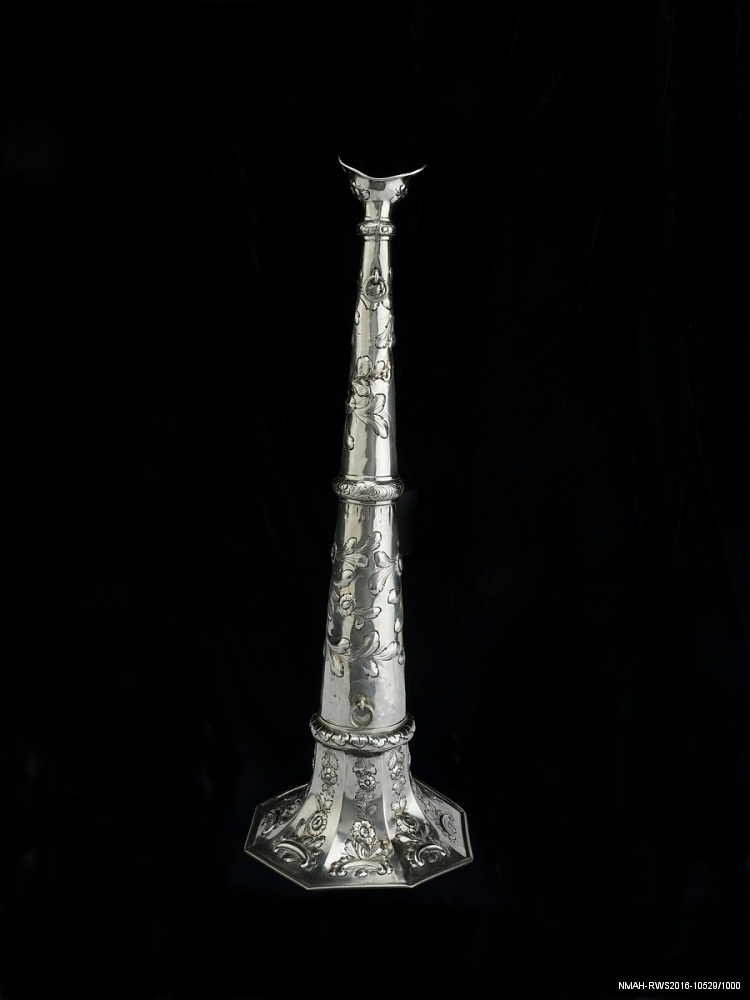 The word “philanthropy” has had different meanings throughout American history, and the changing fortunes of the word reflect various eras’ debates about exercising power through giving.

African American women in Philadelphia presented this fireman’s presentation trumpet to white firemen in the Good Will Engine Company around the mid-1800s. What can its inscription tell us about notions of moral responsibility in the 1800s?

The “gang of [white] men and boys, several hundred strong and armed, began gathering in an African American neighborhood of Philadelphia around 9 o’clock an October night in 1849. African American men confronted them, but before long the neighborhood was under siege. Attackers set fire to the property of an interracial couple and, a newspaper reported, African American residents fled in terror pursued by rioters throwing brickbats and firing weapons. Several of the city’s white fire companies, including the Good Will Engine Company, responded and the crowd assaulted them too. It wasn’t until the following day that the riots were put down.1

After the riot, African American women of Philadelphia honored the Good Will Engine Company by presenting it with a silver fireman’s presentation trumpet inscribed with words that asserted what “philanthropy” looked like to them. The inscription reads “Presented to the Good Will Engine Co. By the Colored women of Philad.a. as a token of their appreciation of their manly, heroic, and philanthropic efforts displayed upon various trying occasions in defense of the persons, rights and property of their oppressed fellow citizens.”2  When the African American women used the term “philanthropic,” they meant the men were colorblind when they gave help.

“Philanthropy” had not yet come to be primarily associated with eye-popping financial gifts. Rather, it referred to a sentiment—loosely translated from the original Greek as “love of humanity.”  That feeling could lead people to cross barriers and aid others who were different from themselves. When the African American women chose to laud the firefighters as “philanthropic,” they were recognizing the sufferers and responders came from different backgrounds. The men had overcome divisions wrought by America’s long history of white hostility to African Americans to save black lives. The inscribed trumpet not only honored the men’s heroism, but also served to emphasize that moral responsibility included aiding people outside one’s immediate circles.

One hundred years before the women bestowed the trumpet on the firefighters, the word “philanthropy” had been little used in British America. The Christian religion that many white Americans, along with increasing numbers of African Americans, adhered to enjoined people to love a stranger as a neighbor. Some felt that was laudable as an ideal, but most believed that in practice they should give their charitable assistance to members of their local, ethnic, and religious communities, and even the British imperial community Americans in the Thirteen Colonies belonged to before independence. Aiding humanity at large seemed impractical or even morally questionable, and the word “philanthropy” had little place in people’s vocabulary.3

The American Revolution brought the word into vogue. Supporters of American independence believed the creation of the independent United States would benefit the world as a beacon of liberty and an asylum from oppression. Love of humanity—“philanthropy”—defined the new nation, some thought. Moreover, many Americans and many Britons alike embraced universal benevolence as they reimagined their relationships to one another following the Revolutionary War. Their sentiments led to action. The wartime enemies cooperated in the postwar years in causes such as antislavery and lifesaving, while Americans also increasingly established charities that aided people outside the religious or ethnic bonds that had generally structured charitable assistance in the past.4

That idea came under strident attack in the 1790s and early 1800s. The French Revolution, which began in 1789, and the Haitian Revolution, which began in 1791, unsettled communities around the Atlantic and led to political and social tensions. In these anxious years, many white Americans rejected the expansive moral responsibility of the post-Revolutionary decade and prioritized instead charitable obligations to family, local, and national communities. No longer widely seen as morally praiseworthy, the concept of “philanthropy” came under attack for a time.5

In the 1800s, the words “philanthropy” and likewise “philanthropist” kept their association with wide-ranging moral concern. A typical use of the word came in a ladies’ magazine that referred to the era’s many “schemes of philanthropy,” including aiding enslaved people, prisoners, irreligious Americans, Native Americans, and various foreigners.6  In the same vein, an Ohio antislavery periodical was entitled The Philanthropist, and the term was in the names of other reform publications. While the word was embraced by some, the practice of philanthropy also sparked controversy. Magazines ran critical articles with titles such as “False Philanthropy,” “Mistaken Philanthropy,” and “Quack Philanthropy.”7

It was the rise of big-money gifts that changed the word’s meaning. As industrial capitalists began to accumulate great wealth and to make large donations in the 1830s and 1840s, the press reported on their gifts using the word “philanthropy.” The term was also being used at that time in its older meaning—as the trumpet reveals—but the connection to large financial contributions was developing. A few decades later, industrialist and benefactor Andrew Carnegie linked “philanthropy” with big fortunes when he wrote an essay titled “The Best Fields for Philanthropy.” Carnegie detailed the ways he believed men of great riches should use their “surplus wealth” for the good of society, such as by supporting universities, libraries, or parks.8

The changing meaning of the word "philanthropy" concerned some. In 1887 a Vassar College graduate named Helen Hiscock Backus commented that “philanthropy” had come to refer to giving money or great amounts of time or effort. College-educated women, she argued, needed to “redeem the word philanthropy from the strait [sic] and narrow meaning thrust upon it in popular understanding.” Improving the lot of individuals or of humanity involved much more than large gifts.9

In spite of those concerns, the association of “philanthropy” with large monetary gifts has stuck for over a century. As a result, “philanthropy” can be a hard term for people to relate to since it doesn’t seem to be about them. That’s why the National Museum of American History’s exhibit on philanthropy is called Giving in America.

The inscribed trumpet recalls the older definition of the word with its broad understanding of who could play a role in forming and re-forming the world. It also hints at the debates that giving has provoked. The history of American philanthropy includes all these dimensions of the word. It’s the stories of people who have shaped America through their giving, along with those who have experienced and contested the power exercised through philanthropy. The women who bestowed the trumpet on the firefighters implicitly suggested we reflect on the meaning of “philanthropy.” What has it meant in concept and in practice to other Americans? What does it mean to us today?

Dr. Amanda B. Moniz is the David M. Rubenstein Curator of Philanthropy in the Division of Work and Industry.