The Iron Lung and Other Equipment

She talks so that you can barely hear her, she talks on the exhale, because she cannot talk on the inhale. which means that her sentences are interrupted fifteen times each minute, for the breathing machine to make her breathe, which makes conversations with her quite leisurely, long pauses in the sentences, and everyone learns to be patient....
Lorenzo Wilson Milam, writing about his sister, 1984

What is an Iron Lung?

No device is more associated with polio than the tank respirator, better known as the iron lung. Physicians who treated people in the acute, early stage of polio saw that many patients were unable to breathe when the virus’s action paralyzed muscle groups in the chest. Death was frequent at this stage, but those who survived usually recovered much or almost all of their former strength.

Nothing worked well in keeping people breathing until 1927, when Philip Drinker and Louis Agassiz Shaw at Harvard University devised a version of a tank respirator that could maintain respiration artificially until a person could breathe independently, usually after one or two weeks. The machine was powered by an electric motor with two vacuum cleaners. The pump changed the pressure inside a rectangular, airtight metal box, pulling air in and out of the lungs.

Inventor John Emerson had refined Drinker’s device and cut the cost nearly in half. Inside the tank respirator, the patient lay on a bed (sometimes called a “cookie tray”) that could slide in and out of the cylinder as needed. The side of the tank had portal windows so attendants could reach in and adjust limbs, sheets, or hot packs. 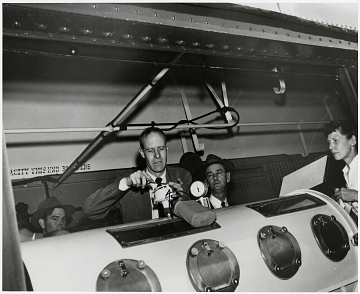 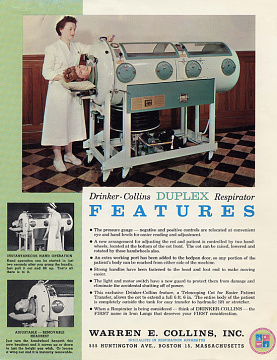 Advertisement for Drinker-Collins respirators, showing bellows on the bottom, 1950s

FACTOIDS
There was a tremendous psychological element at work in all of us in our relationship to the lung. The metal respirator assumed an almost animate personality and became a symbol of protection and security…. We were incomplete embryos in a metal womb.
Larry Alexander, 1954
Previous
Next This blue iron lung is the first one made by John Emerson's company. He tested it by spending the night in it. It was first used in Providence, Rhode Island, in 1931 to save the life of a priest with polio. 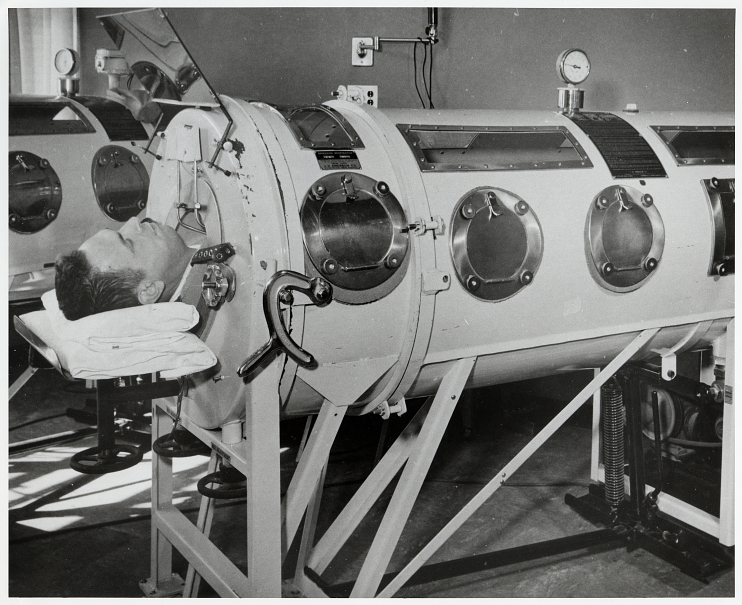 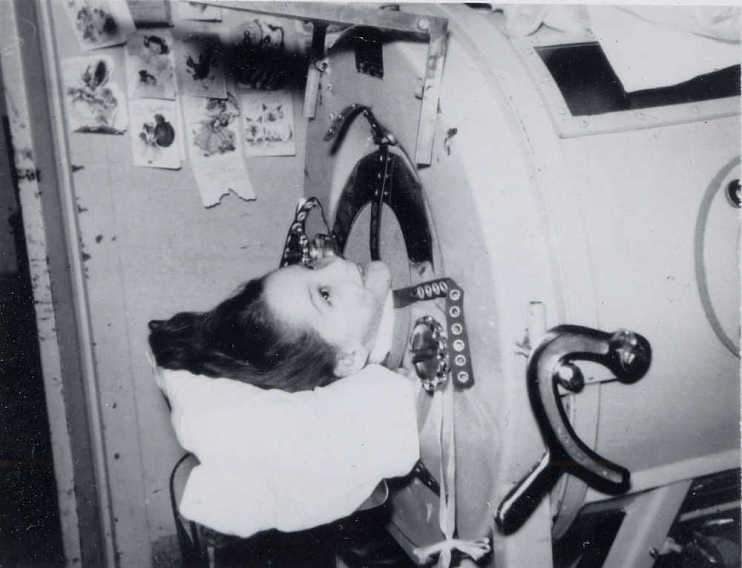 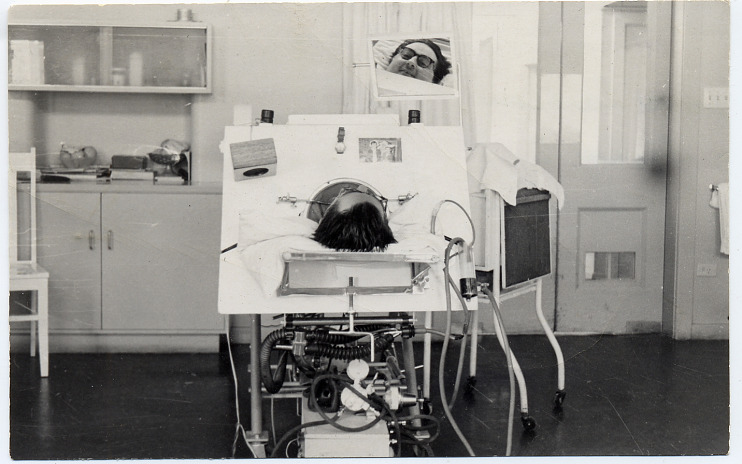 For the person using the respirator, the mirror angled above the head created a unique perspective of the world as upside down and backwards
Courtesy of Post-Polio Health International 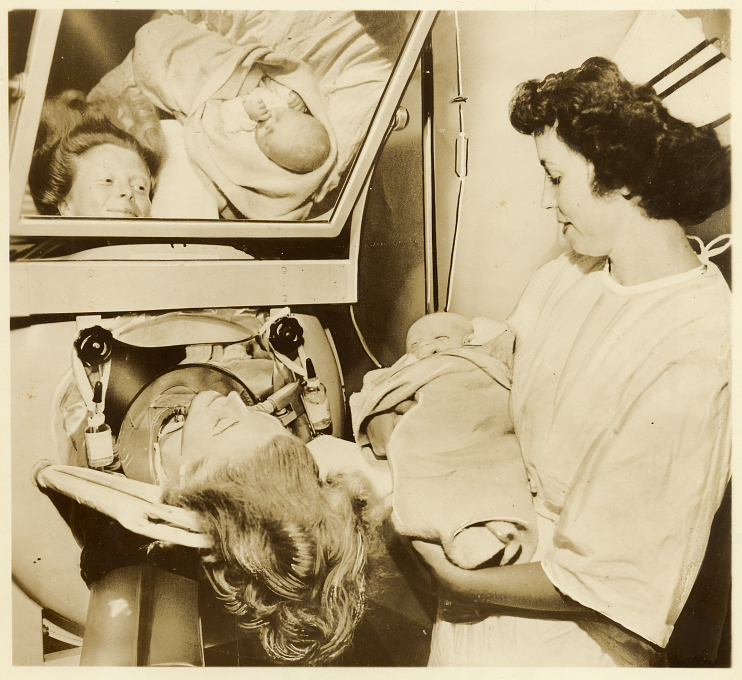 This blue iron lung is the first one made by John Emerson's company. He tested it by spending the night in it. It was first used in Providence, Rhode Island, in 1931 to save the life of a priest with polio.

For the person using the respirator, the mirror angled above the head created a unique perspective of the world as upside down and backwards
Courtesy of Post-Polio Health International

« prev next »
“We hope the oxygen will keep you breathing on your own,” he continued. “If not, a respirator will help you.” I looked where he pointed, and a wave of horror poured over me as I realized: respirator was another name for what was popularly called an “iron lung.” I thought it would be like being in a coffin while you were still alive. Now an iron lung loomed beside my bed, hoses hanging like tentacles, a gray octopus ready to swallow me at any moment.
Peg Kehret, 1996

Grasping for straws is easier;
You can see the straws.

“This most excellent canopy, the air, look you,”
Presses down upon me
At fifteen pounds per square inch,
A dense, heavy, blue-glowing ocean,
Supporting the weight of condors
That swim its churning currents.
All I get is a thin stream of it,
A finger’s width of the rope that ties me to life
As I labor like a stevedore to keep the connection.

Water wouldn’t be so circumspect;
Water would crash in like a drunken sailor,
But air is prissy and genteel,
Teasing me with its nearness and pervading immensity.

The vast, circumambient atmosphere
Allows me but ninety cubic centimeters
Of its billions of gallons and miles of sky.

I inhale it anyway,
Knowing that it will hurt
In the weary ends of my crumpled paper bag lungs.

Patents for the Benefit of All
In the 1930s, Philip Drinker and Harvard University (where Drinker was a faculty member) took John Emerson to court, claiming he had infringed on patent rights by altering Drinker’s iron lung design. Emerson defended himself by making the case that such lifesaving devices should be freely available to all.

Years later, when Jonas Salk was asked whether he would patent his polio vaccine and make a fortune, he replied that the vaccine belonged to everyone, making the comparison, “How could you patent the sun?”

The principle of the bed was simple. When my head was up, my feet down, my internal organs were pulled by gravity, pulling my diaphragm with them and sucking air into my lungs. When my position was reversed … air was forced out of my lungs.
Larry Alexander, 1954 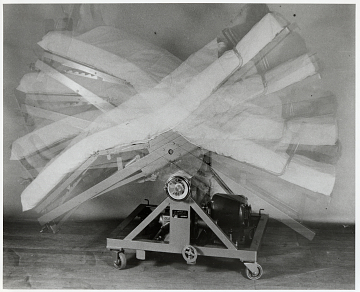 Time-elapsed image showing the motion of a rocking bed, 1950s 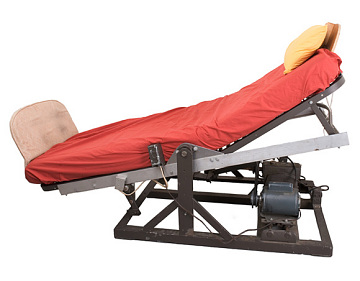 Strips of steaming wool, heated in tubs, were essential to the Sister Kenny method of treating the muscle spasms and intense pain of polio

After only a couple of days of hot packs, my muscles started to relax. Up until then, my muscles were as tight as the strings in a tennis racket. When your muscles are that tight, you can’t move anything.
Edmund Sass, 1996 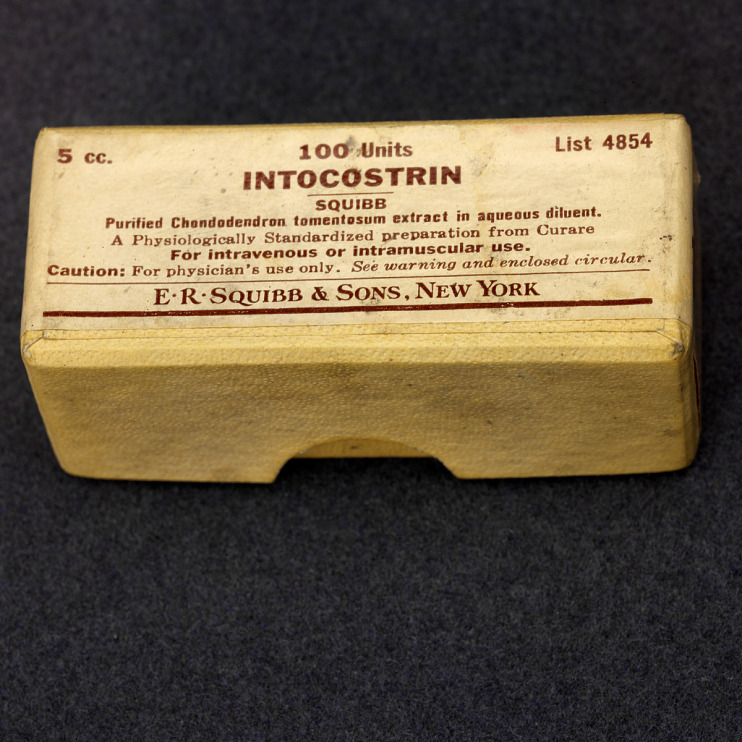 Injections of intocostrin, derived from the poison curare, were used as an alternative to the hot, moist Kenny packs as a way to stop painful muscle spasms. Box of medication, 1951

View object record
‹ Assistive Devices up The Virus and Vaccine ›