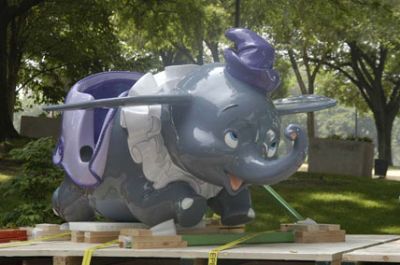 The Dumbo the Flying Elephant ride is an original Disneyland attraction from 1955 and one of the most popular rides in the park.  It features music and exciting aerial views, as well as fiberglass “elephant” cars.  The cars include an interactive lever that allows riders to control how high they fly.  Remodeled in the 1980s, the ride was inspired by Disney’s 1941 movie, “Dumbo.”

Located in Anaheim, California, Disneyland was the first Disney theme park and the only one created under the direction of Walt Disney.  Opening day included a live television special, a seven-mile traffic jam, and 28,000 guests.  In the five decades since it opened, Disneyland has welcomed more than 500 million visitors, and has spawned similar parks in Orlando, Tokyo, Paris, and Hong Kong.

The storyline of the film “Dumbo” is based on a 1939 children’s book written by Helen Aberson and illustrated by Harold Perl.  Animated by Bill Tytla, the movie follows the young elephant as he is separated from his mother at the circus, only to be taunted by the other animals.

When former President Truman visited Disneyland in 1957, he chose not to ride the Dumbo Flying Elephants, as the elephant is a symbol for the Republican party.

The Dumbo car was donated to the National Museum of American History on June 9, 2005, on the occasion of Disneyland’s 50th anniversary.