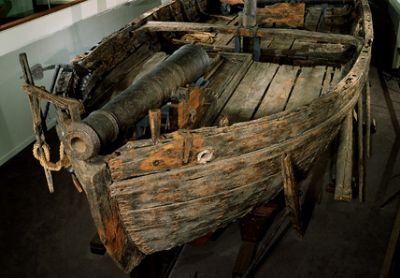 The Gunboat Philadelphia is the oldest surviving American fighting vessel. Built in 1776, it was sunk in Lake Champlain during a naval battle with the British in the same year. The Continental Congress authorized the building of this 54 foot, 29-ton gunboat and eight other similar vessels for the defense of the Champlain Valley - the northern frontier of the colonies considered the key to the success or failure of the American Revolution. In the summer of 1776, under the leadership of the charismatic and controversial Brigadier General Benedict Arnold, Philadelphia and her sister-ships were hurriedly organized into what historians consider “the first American Navy.”

Throughout the summer and into the fall, this small fleet imposed a strategic delay on British invasion plans to divide the colonies. On October 11, 1776, the Americans met the enemy in a hard-fought battle, but the superior firepower of the British squadron proved decisive. An hour after the initial battle ended, the badly-damaged Philadelphia sank. By the end of the three-day engagement on Oct. 13, the British had gained control of Lake Champlain, and most of the American fleet had been destroyed. Though a defeat for the Americans, the naval contest for Lake Champlain is considered the foundation for the defeat of British Commander John Burgoyne’s army at Saratoga the following year. The battle delayed the British campaign and led to the postponement of further advances. Arnold thus gave the American army time to build the strength necessary for the victory at Saratoga. Philadelphia and the other vessels in Arnold’s fleet had served their purpose.

The Philadelphia rested on the bottom of the lake until it was discovered and recovered with much of its equipment intact in 1935 by Lorenzo F. Haggulund, a civil engineer who for many years exhibited it as a tourist attraction. It came to the museum in 1964, complete with the 24-pound ball that sent the gunboat to the bottom.