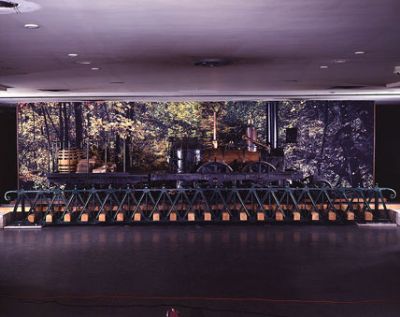 “John Bull,” one of the earliest steam locomotives in the United States, was imported from England in 1831 for the Camden & Amboy Rail Road, the first rail link between New York and Philadelphia. The engine tended to derail on uneven American tracks, but a set of guide wheels attached to the front of the locomotive solved the problem.

“John Bull” and its cars were soon carrying passengers and freight between the nation’s then two largest cities, reducing the trip from two days by road to five hours by rail. The Camden & Amboy Rail Road’s 1834 annual report reveled in the engine’s quick success and marveled that the steam locomotive was “a power which has almost annihilated time and space.”

The locomotive was brought to the Smithsonian in 1884 and has been on view at the National Museum of American History since the Museum opened in 1964.

The bridge on display is a section of the first iron railroad bridge built in the United States. Constructed in 1845, the bridge carried coal-hauling trains of the Philadelphia & Reading Rail Road across a small creek near West Manayunk, Pennsylvania. Because the railroad threatened to take business away from the Schuylkill Canal, angry boatmen had been making futile attempts to sabotage the competition by burning its wooden bridges. Iron was an unusual and expensive choice for a bridge, but it was stronger and longer-lasting than wood, faster to erect than stone, and fire-resistant. It ushered in a new era of engineering.