Rigging Crew Does the Heavy Lifting 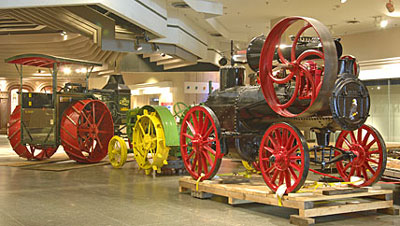 When you're moving objects that weigh between 1,000 and 35,000 pounds out of the building, crating is no longer an option.  It's time to bring in the rigging crew to handle the complicated engineering work and planning.

More than 25 objects were simply too large and heavy to be crated, which meant that instead they had to be rigged out of the building.

Rigging is a process in which heavy, complex objects are first secured and then transported to a new location. In the Museum’s case, many of the machines and tractors in the Hall of Agriculture had to be rigged out of the building, including a John Deere farm tractor and a Huber tractor.

One of the keys to rigging is to first make the object “moveable” and then to always maintain control of the object when it's in motion. An object becomes moveable in different ways: by lifting it onto dollies, using a forklift, and/or situating the object onto metal or wooden skids. Even when objects are placed on skids or lifted with forklifts, they are still often secured to the forklift or rig with cables to further anchor it.

The planning process behind rigging goes beyond the engineering of the skids and how to move the object.  Planning to move the 17-ton, test section cable of the George Washington Bridge from 1929 required these extra considerations.  Because of the cable’s weight, the structural composition of the Museum building was examined to determine which areas of the floor could support such a weight during the move. Once that path was mapped out, the surrounding area had to be protected while the artifact was being moved.  This required the use of steel plates to protect the floor. Finally, careful calculations were done to determine the size of straps needed to hold the object while lifting it onto the truck bed for transportation.

Once the objects are on the trucks, the rigging crew's work continues as they transport the objects to the Museum’s offsite storage facilities.  Weather conditions must be favorable for the move for the protection of the objects. Then, because of the size of the objects, they often constitute “wide loads,” resulting in the need to transport the objects at night in order to adhere to traffic considerations and law. Complicating the matter further is the fact that each city and state has its own rules and regulations, all of which must be followed while moving these objects. Finally, some of the pieces must actually be reassembled offsite, as they were disassembled for transport.

Previous story: Part I, Crating Collections for Safe Keeping
What happens when 100,000 museum objects must find new and secure homes during major renovation work? The process of crating and moving objects into storage, especially large artifacts that must be dismantled, is an intricate, time-consuming process. Learn how skilled workers package and move everything from a log cabin to Disneyland’s Dumbo ride.  Read the story.

Next month: Part III, We’re Picking Up (Bad) Vibrations
Even though many objects have been crated and/or moved out of the building, millions more remain on site and must be protected against vibrations, a side effect of construction. Read about how the Museum will prevent its collections from "walking" all over their storage units due to increased vibration activity caused by the renovation. Read the story.