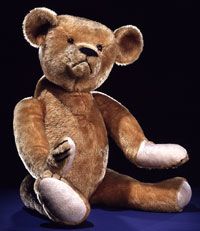 The year 2002 marked the 100th anniversary of the political cartoon that sparked the creation of the Teddy Bear. One of the first produced toy plush bears sold as "Teddy" is part of the Museum's political history collection and is currently on view in The American Presidency: A Glorious Burden exhibition.

While bear hunting Mississippi and Louisiana in 1902, President Theodore Roosevelt decided it was unsportsmanlike to shoot a bear that had been surrounded by dogs, rendered unconscious and tied to a tree. Roosevelt asked a hunting guide to kill the bear with a knife, putting it out of its misery. This event became the subject of an editorial cartoon by Clifford Berryman of the Washington Post who, neglecting to document the death of the bear, portrayed Roosevelt in a compassionate light, sparing the bear's life, and thus igniting the teddy bear craze. The cartoon was redrawn and published several times and the image of the bear subsequently changed, becoming smaller and more endearing, finally depicted as a bear cub.

The story of Roosevelt's unsuccessful bear hunt sparked the imagination of Morris Michtom, who asked his wife Rose to create a toy plush bear to commemorate the event. According to family lore, Michtom said he received personal approval from Roosevelt himself when he asked to use the President's nickname "Teddy" for the bear. The popularity of the bear led to the highly successful Ideal Novelty and Toy Company in New York, founded by Michtom around 1903. Benjamin Michton, son of Ideal's founder, gave the bear to Roosevelt's grandson Kermit, his wife and their children, in late 1963. The toy was in the family's possession for just one month before curator Herb Collins accepted it for the museum in January, 1964. The bear dates to 1903 and is in perfect condition.