The second installment in this two-part series explores the renovation projects, including a state-of-the-art home for the Star-Spangled Banner and a dramatic natural light filled atrium which will help transform the Museum into a 21st century institution. The first part of this series explored the architectural history of the Museum's 43-year-old building from the Museum's conception in the late 1940s to its implementation, in modern and classical styles, in 1964. Read Making a Modern Museum: Part One

Since opening its doors in 1964, the Museum has been confronted with a number of space challenges. Findings from internal reports and staff concerns as well as issues raised by the 2002 external Blue Ribbon Commission Report have been incorporated into the current renovation project, officially known as the "Public Space Renewal Plan." The project includes construction of a new gallery for the Star-Spangled Banner, architectural enhancements to the center core of the building, and updates to the building’s infrastructure (mechanical, electrical, plumbing, lighting and security systems). 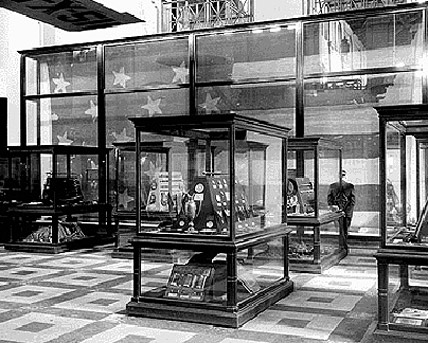 The Star-Spangled Banner on display in a case at the National Museum.

Since 1907, the Smithsonian has cared for the Star-Spangled Banner—the flag that inspired the national anthem—and displayed it for the American people. Over the years, conservators and other staff have preserved the flag, kept it clean, and protected it from harm. The goal has always remained the same: to make the flag available to the public and to ensure the treasured flag’s survival for generations to come.

When the National Museum of American History first opened in 1964 as the Museum of History and Technology, a key goal was to provide a more fitting display and a better environment for the Star-Spangled Banner. Flag Hall, at the center of the building, was specifically designed so that the banner would hang vertically in its entirety. Previously, the flag had been on view in the Arts and Industries building partially folded in a large case.

Thirty-five years later, the Museum determined that the Star-Spangled Banner needed extensive conservation treatment. In December 1998, conservation staff with the help of riggers removed the flag from exhibition in Flag Hall. Conservators examined every inch of the flag, documented its condition, and carefully vacuumed it in preparation for its move into a new laboratory.

Work on the flag began in the new lab in May 1999. Over the next few years conservators painstakingly removed the old linen backing, cleaned, and then stabilized the banner with a new, modern backing. The treatment was performed in full view of the public and more than 12 million visitors observed the work. The treatment was completed in late 2005.

During the conservation, the Museum determined that the almost 200-year-old Star-Spangled Banner was too fragile to be displayed in a hanging position. When the Museum reopens Nov. 21, 2008, the Star-Spangled Banner will be displayed in a specially constructed, dramatic room under optimal lighting and environmental conditions. Visitors will be able to view a side of the flag that was previously obscured by the linen backing, revealing its true colors. The flag will be displayed in accordance with the U.S. flag code at a horizontal orientation and at a 10 degree angle. Low light levels will protect the flag, while also providing a dramatic atmosphere to evoke the image of the “dawn’s early light.” 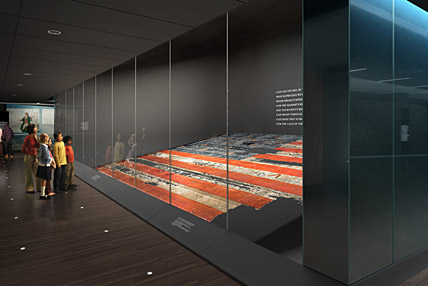 A state-of-the-art display chamber and exhibition provide a new home for the flag that inspired the national anthem.

The Central Core
With the Star-Spangled Banner in a new home, the rest of the central section of the Museum will also undergo a dramatic renovation to open the space. A new skylight will allow natural light into the atrium and walls will be removed on the third floor to create vistas across the Museum. A grand staircase will connect the Museum’s first and second floors and a Welcome Center at the Mall entrance will enhance visitor orientation. These improvements are intended to make the Museum brighter and easier to navigate. 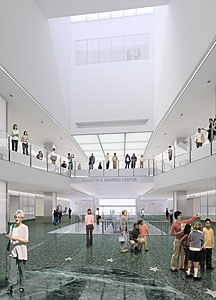 New interior vistas, a skylight, and a five-story atrium transform the center of the building.

In addition, special cases dubbed “artifact walls” will line the central halls of the Museum, giving visitors an exciting preview of the Museum’s collections and their connection to American history. These 10-foot-plus high walls will showcase the breadth of the Museum’s three million objects in rotating selections. Distinctive landmark objects will provide the visitor with insight as to which exhibitions and objects are located in the various wings of the museum. 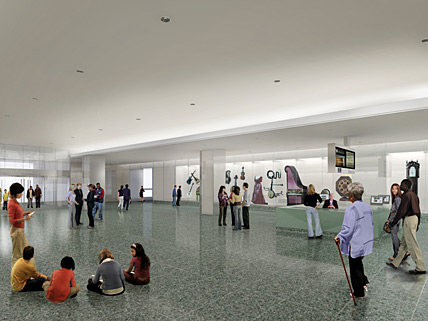 Just the Beginning
The reopening of the Museum is scheduled for November 21, 2008. While this phase of the renovation concentrates on the building’s core, future plans call for renovation of the exhibition wings, including updates to the infrastructure and galleries. The Museum plans to complete the full transformation of the building by 2014, in time for its 50th anniversary. Within the next decade, a new National Museum of American History will emerge. Learn more about the renovation.