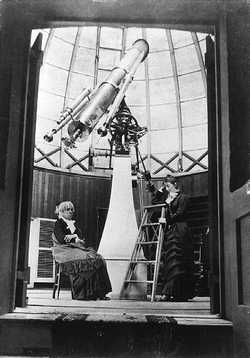 This telescope was used by Maria Mitchell, America’s first woman astronomer and first woman scientist of note. Mitchell gained international recognition for discovering a comet in 1847. She taught astronomy at Vassar College in New York from 1865 to 1888.

An advocate for women’s rights, Mitchell encouraged her students to see science as an avenue for escaping the bounds of tradition and authority. “When [women] come to truth through their investigations . . . the truth which they get will be theirs, and their minds will work on and on unfettered.

The purchase of the telescope was funded by Matthew Vassar, the founder and benefactor of Vassar College. The lens has a diameter of 12-3/8 inches, making it the third-largest refracting telescope in America at that time. In addition, the telescope’s equatorial mount, meaning that it has one rotational axis parallel to the Earth’s axis of rotation, allowed it to be aligned with Earth’s poles. This enabled the telescope to follow the motion of stars and planets across the sky.

Housed with other state-of-the-art equipment in the Vassar observatory, the telescope lent prestige to the astronomy department and proved a major attraction in recruiting the brightest students.

Sarah Gibson Blanding, president of Vassar College, donated the telescope to the Smithsonian Institution’s Museum of History and Technology in 1963. The Museum was renamed the National Museum of American History in 1980, where the telescope remains in the History of Physical Sciences collection as a symbol of science education and the role of women in science.