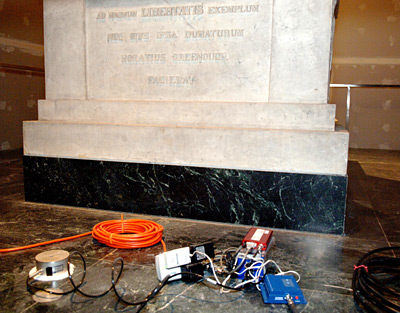 Throughout the day, objects within the Museum are constantly experiencing vibrations caused by people moving about, the operating of the mechanical systems, and other routine occurrences. During the Museum’s renovation, construction activities can create stronger vibrations that may become harmful to the collections.

While no standard exists for safe vibration levels during museum renovation projects, several key factors must be considered when protecting the objects: the type and location of construction activity; the weight and composition of the artifact; the type of storage unit and how the artifact is stored within/on it; the overall building composition; and the vibrations themselves.

To determine the normal, or ambient, vibration levels in the building, seismic monitoring stations positioned at four locations throughout the Museum continuously recorded the vibration levels for ten days. To estimate what vibration levels might be during construction, the Museum did a series of “worst case” tests over the course of a day. These tests ranged from dropping 50 pounds of material from an elevated height onto the Museum floor to cutting through the Museum’s terrazzo tiles using various types of saws and unusual cutting patterns.

Based on the ambient and test vibrations, a warning and maximum allowable vibration levels for the Museum were set. These levels were programmed into the four seismic monitoring stations placed throughout the building. Each seismograph will constantly monitor the vibration activity at its location. If at any moment the activity exceeds the warning or maximum limits, the seismograph will instantly notify designated construction, engineering, and Museum personnel via text and cell phone messages.

The tests also revealed that while the locations in question (the George Washington statue; the Gunboat Philadelphia; Room 450, Ceramics and Glass; Room 5026) did occasionally feel these test vibrations, most of the vibrations were actually absorbed in the Museum’s expansion joints, a common feature in large buildings. The expansion joints’ normal function is to protect the building from the contractions and expansions associated with changing weather, but in the case of major construction, the joints can also absorb the vibrations. Testing found that any vibration occurring between the expansion joints has minimal impact on the collection rooms located on the other side of the joint. Since most of the scheduled construction projects are occurring in the center of the Museum between two expansion joints, the collections should experience only safe levels of vibration.

Previous story: Part II, Rigging Crew Does the Heavy Lifting
When you need to move objects that weigh between 1,000 and 35,000 pounds out of the Museum, crating is no longer an option. It's time to bring in the rigging crew to handle the complicated engineering work and planning. Read the story.