What Happens Behind Closed Doors? The Preparation of Caroline Harrison's Inaugural Gown

Although the Museum is closed for renovation, exhibition preparation projects continue. As the Museum prepares to reopen November 21, 2008, the staff is working hard to make exhibitions ready for the public.

A key step in readying exhibitions is preparing objects for display.  An item that has recently been under review by preservation staff is First Lady Caroline Harrison's 1889 inaugural gown.  In keeping with the "America First" economic policy of her husband, Benjamin Harrison, Caroline’s gown was an "All-American" creation, made in New York City by William Ghormley's firm, Ghormley, Robes et Manteaux.  The Logan Silk Company in Auburn, New York, produced the fabric for the dress, while Indiana artist Mary Williamson designed the brocaded silk fabric in a pattern of Burr Oaks in tribute to Benjamin Harrison's grandfather, President William Henry Harrison. 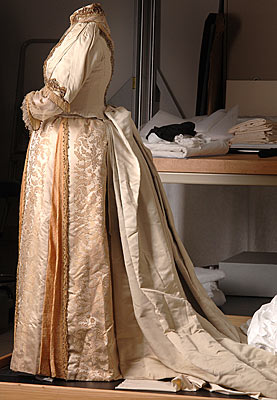 The Harrison dress was on display for more than a half century until the Museum closed in 2006.  When the new First Ladies exhibition opened in 1992, the light level was measured to be less than 2 foot candles.  Three to five foot candles are the recommended maximum light specifications for textiles since they are so sensitive to light. Natural light can be hundreds foot candles. Although the dress was kept in such a low light level, the exposure to natural and bright artificial lights over many years caused irreversible deterioration of the fabric and fading of the colors.  The portion of the skirt made with weighted silk became so weakened over time that it breaks nearly any time it is touched.  This is not unusual as many nineteenth-century dresses with weighted silk have the same serious problems. 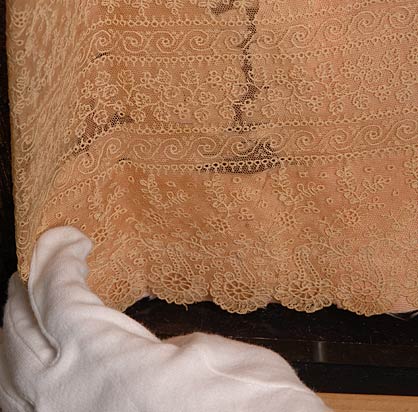 When the Museum reopens November 21, 2008, the Caroline Harrison dress will be a new addition to "The American Presidency" exhibition instead of "First Ladies."  The dress was mounted originally on generic fiberglass mannequins.  With the opening of "The American Presidency:  A Glorious Burden" exhibition in 2000, the Museum started to use a new type of support form which is constructed of Ethafoam, so it is important for the Harrison dress form to have a similar look. 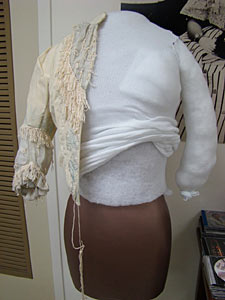 Sunae Park Evans, senior costume conservator, decided to remount only the bodice, since the skirt needs to remain untouched due to its fragile condition.  Fortunately, a muslin mock-up of the bodice is available from a previous project, which Evans will use instead of the actual bodice to prepare the form.  Once completed, the mounting will match the others in "The American Presidency" exhibition. 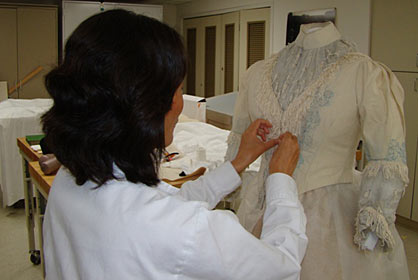 Evans, along with curator Harry Rubenstein, faced a tough decision in determining whether or not Harrison's dress should be put back on display.  Since they know that the dress will deteriorate whether it is on display or is placed in storage, they decided to continue to exhibit the dress, especially since it will continue to be exhibited in an ideal environment.  Decisions such as this one are made on a daily basis and conservators and curators must take into account what is in the best interest of the exhibition, the object, and the public.

Look for Caroline Harrison's dress in the inaugural section of "The American Presidency" when the exhibition reopens with the Museum on November 21, 2008.

Learn More About the Renovation
The Museum closed in 2006 for a major architectural transformation focusing on three areas: architectural enhancements to the museum’s interior, constructing a state-of-the-art gallery for the Star-Spangled Banner and updating the 42-year-old building’s infrastructure (mechanical, electrical, plumbing, lighting, fire and security systems.) It reopened November 21, 2008. Learn more.