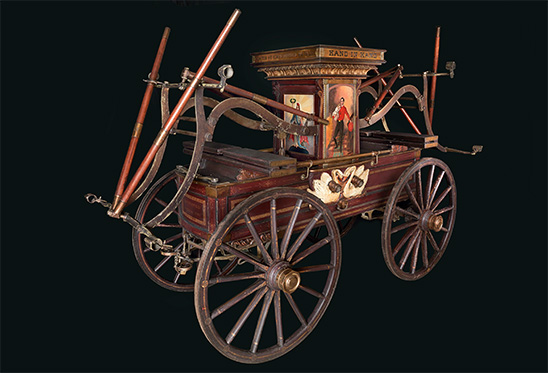 To recognize bravery and public service in America, the Smithsonian’s National Museum of American History will feature a 19th-century fire pumper—a predecessor to the modern fire engine—at its Constitution Avenue entrance beginning June 27. It will be paired with a Conestoga wagon and tell the everyday stories of early Americans.

“This magnificent piece of American history was originally inscribed with the words, ‘Non Sibi Sed Omnibus,’ which is Latin for ‘not for self, but for all,’” said John Gray, director of the museum. “I believe this inscription accurately represents the best of our American spirit and the nation’s values both then and now.”

The public will see the inscription, “United We Stand, Divided We Fall,” which was added to the fire pumper when it was sold for the second time and transported from New Jersey to Philadelphia in the 1880s. The fire pumper was decorated with panels and inscriptions that paid homage to the famous Hand in Hand Fire Co. of Philadelphia. Both inscriptions convey a sense of mutual solidarity, which inspired volunteers to protect and serve the neighborhoods they resided in.

This artifact is part of a larger collection of 2,500 objects—one of the oldest of American firefighter objects in the museum—donated by CIGNA in 2005. Most post-Revolutionary War, pre-Civil War fire pumpers, such as the one going on display, were pulled by hand through narrow streets where firefighters could operate the pump levers with several teams working in short shifts. Though earlier pumpers had tubs filled by bucket brigades, this pumper was equipped with a suction hose to draw water directly from municipal hydrants and cisterns. Through early piston technology, an engine of this size could throw more than 100 gallons a minute on a blaze from a distance of 150 feet or more.

“American history is not only about patriotic figures and battles, equally important to our nation’s identity are the unsung heroes, such as the early volunteer firefighters who pulled these fire pumpers on a moment’s notice in the service of their communities,” said Tim Winkle, curator at the museum.

Before the 1850s, firefighting in urban America was performed by volunteer fire companies, who purchased their own uniforms and equipment without municipal funding. A fire pumper was often the company’s biggest investment and became a source of pride and identity. These early fire engines were lavishly decorated with brass fixtures, elaborate carvings and painted panels that could be fitted for parades and ceremonies. The fire pumper on display is outfitted with decorated panels depicting firefighters of that period, which relate to the display of early American fire hats in the adjacent Artifact Walls.

CIGNA, an organization specializing in health insurance and related benefits, was founded in part by the Insurance Company of North America Corp.—the oldest fire and marine insurance company in America. CIGNA held on to the INA collection of fire and marine objects until it donated it to the Smithsonian.

The National Museum of American History explores the infinite richness and complexity of American history. The museum helps people understand the past in order to make sense of the present and shape a more humane future. It is currently renovating its west exhibition wing, developing galleries on business, democracy and culture. For more information, visit https://americanhistory.si.edu. The museum is located at 14th Street and Constitution Avenue N.W., and is open daily from 10 a.m. to 5:30 p.m. (closed Dec. 25). Admission is free. For Smithsonian information, the public may call (202) 633-1000.