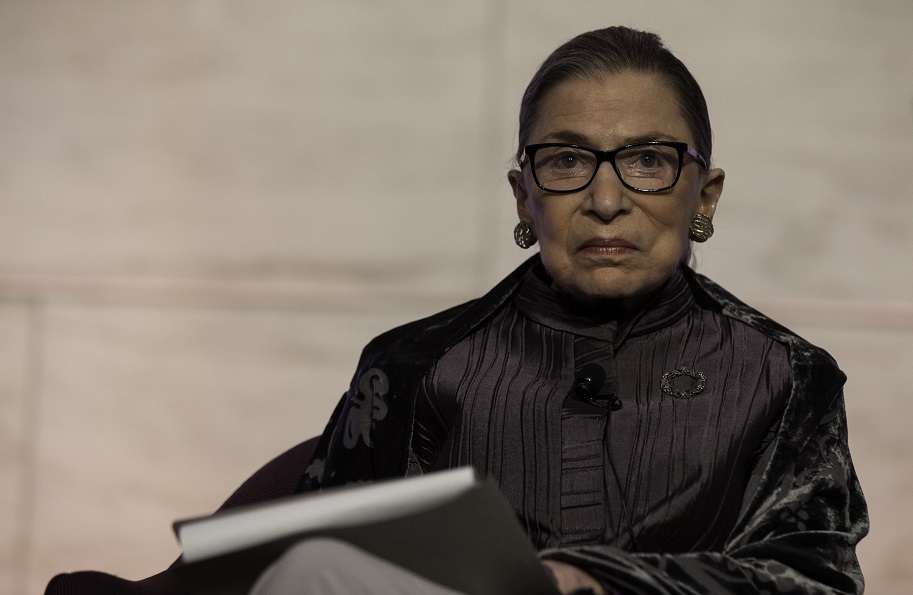 In a virtual tribute to the legacy of Associate Justice Ruth Bader Ginsburg, the Smithsonian’s National Museum of American History will honor her posthumously March 30 with the Great Americans Medal and a preview of objects related to her Supreme Court career that will be donated by her children, Jane C. Ginsburg and James S. Ginsburg. Featuring biographical films narrated by Gloria Steinem, testimonials from President Jimmy Carter, Chief Justice John G. Roberts, Jr., Smithsonian Secretary Lonnie G. Bunch III, Barbara Streisand and Oprah Winfrey, among others, the ceremony is the museum’s capstone Women’s History Month event.

The Ginsburgs will discuss the donation with the museum’s Elizabeth MacMillan Director Anthea M. Hartig during the program in which Ginsburg will receive the museum’s signature honor, the Great Americans Medal. The justice’s judicial robe from Maison Bosc, Paris, several distinctive collars, including the lace judicial collar that appears in a number of her official Supreme Court photographs and the “dissent” collar, legal briefs, her attaché case, a copy of the Lilly Ledbetter Fair Pay Act of 2009 framed with a photograph of President Obama signing the legislation are part of the donation along with artwork and memorabilia capturing her status as a pop culture icon, including an On the Basis of Sex movie poster.

“This generous donation helps us tell more fully the complex history of the United States and Justice Ginsburg’s connections to pivotal moments in women’s history, especially the fight for gender equity,” Hartig said. “It is an honor to steward these objects and histories at the nation’s flagship museum, as they reinforce our belief in utilizing history to enhance civic health.”

Supported by philanthropist and former Smithsonian Regent David M. Rubenstein, the ceremony will include the Ginsburg family discussing their mother’s proudest Supreme Court moments, her reaction to viral fame and the evolution and meaning behind the collars that adorned her judicial robe. Rubenstein will draw upon his personal relationship with the justice to speak to how she exemplified the ideas and ideals of a great American and what audiences can learn from her story.

Ginsburg, who was appointed to the nation’s highest court by President Bill Clinton, served from 1993 until her 2020 death. Previously, Carter appointed her as a judge on the United States Court of Appeals for the District of Columbia Circuit in 1980. She received her Bachelor of Arts from Cornell University, attended Harvard Law School and received a law degree from Columbia Law School, tying for first place in her class, in which she was one of 12 women. Despite her academic achievements, she struggled to find a clerkship or a position at a firm because of her gender.

About the Great American Medal

The museum will present Ginsburg’s family with a specially minted medal struck in Wisconsin from 1.85 ounces of fine gold. It features an American eagle with rays of the sun on the obverse or “head’s side” with the words “Great Americans” and “National Museum of American History” engraved around the edge. The reverse side honors one of the museum’s treasures, the Star-Spangled Banner, and includes the mission of the Smithsonian: “For the increase and diffusion of knowledge.” It measures approximately 1 1/2 inches in diameter and was inspired by the rare Double Eagle coins in the museum’s National Numismatic Collection, which were designed for the $20 gold piece by famed sculptor Augustus Saint-Gaudens. The medal was made possible by museum board member Jeff Garrett and designed by Michael Guilfoyle, an international designer of coins and medals.

Since its inception in 2016, the “Great Americans Award Program” has honored those who have not only made a lasting impact in their fields but those whose philanthropic and humanitarian endeavors set them apart. The Great Americans Medal is presented annually to up to two recipients and includes an interview with the awardee by Rubenstein. Previous honorees include Madeleine K. Albright, Gen. Colin L. Powell, USA (Ret.), Thomas J. Brokaw, Cal Ripken Jr., Billie Jean King, Paul Simon and Dr. Anthony Fauci. More information on the medal is available online. The award presentation is open to the public upon registration.

Through incomparable collections, rigorous research and dynamic public outreach, the National Museum of American History seeks to empower people to create a more just and compassionate future by examining, preserving and sharing the complexity of our past. The museum, located on Constitution Avenue N.W., between 12th and 14th streets, is open Friday through Tuesday between 10 a.m. and 5:30 p.m. Admission is free, and passes are not required. The doors of the museum are always open online and the virtual museum continues to expand its offerings, including online exhibitions, K–12 educational materials and programs. The public can follow the museum on social media on Twitter, Instagram and Facebook. For more information, go to https://americanhistory.si.edu. For Smithsonian information, the public may call (202) 633-1000.