Calendar of Exhibitions and Events: December 2022 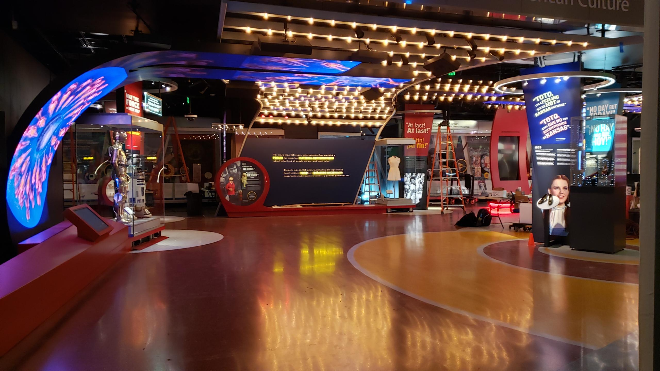 “Entertainment Nation” will be the museum’s first-ever major exhibition showcasing its vast collections related to theater, music, sports, movie and television through the lens of how entertainment brings Americans together, shaping and providing a forum for important national conversations. These include discussions about politics, society, culture and what it means to be an American. Artifacts from Michael Jordan, Babe Ruth, Jackie Robinson, Mia Hamm, Prince, Selena, Judy Garland, Frank Sinatra, Bette Davis and Irving Berlin as well as from the productions, “Hamilton,” “Rent,” “Breaking Bad,” “Batman,” the original “Star Wars” and more, will be on view. The “Ruby Slippers” will be featured in a special spotlight case within this exhibition. Visitors will be immersed in a show featuring graphics, multimedia, stories and iconic objects. At 7,200 square feet, the exhibition will anchor the third floor of the Museum’s new Culture Wing.

From 1947 to 1964, fashion and portrait photographer Richard Avedon published his work in Harper’s Bazaar and his own books and in 1965-66, he donated most of the best-known body of work to the Smithsonian. Avedon’s portraiture is characterized by his revolutionary approach to portraits in which the emotional and psychological depth of the human being are prioritized over flattery of celebrity. This exhibition will feature a selection of his photographs in a gallery designed to engage visitors in conversation.

"Pause & Replay" is a video installation designed to get visitors talking and reminiscing about video games. Located in two relaxing lounge areas in the Museum’s Third Floor West Wing, the video-based installation features personal recollections emphasizing that play is an important part of American culture and history. With humor, curiosity, longing, and joy, seven people share their memories of playing video games at home and in arcades. Their reflections are brought to life with archival images, videos, and animations reminiscent of retro video games. Conversation-starter questions on the wall will prompt our visitors to talk to each other and share their own memories.

Outside the Nicholas F. and Eugenia Taubman Hall of Music are two cases highlighting recent acquisitions to the arts and culture collections that currently display Maya Angelou’s typewriter and Giannis Antetokounmpo’s basketball jersey.

Maya Angelou wrote with poetic detail about the lives of Black people, particularly Black women and girls, in essays, poems, and memoirs, including I Know Why the Caged Bird Sings. Her writings, in their matter-of-fact insistence that Black women’s lives have value, are an eloquent act of resistance in the face of anti-Black racism and sexism. Angelou’s hopeful vision is exemplified in the poem she wrote—likely using this typewriter—for President Bill Clinton’s inauguration.

Giannis Antetokounmpo was born in Greece to Nigerian immigrant parents. Growing up poor and facing racial discrimination, he started playing basketball. He wore this jersey as a teenager while playing semi-pro ball in Athens. Antetokounmpo was drafted by the National Basketball Association’s Milwaukee Bucks in 2013 when he was 18, won his first league MVP in 2018, and in 2021, he helped bring the Bucks an NBA Championship. In 2021 he was named one of the NBA’s 75 all-time greatest players.

The museum’s 10-day family festival will celebrate the opening of the new Culture Wing.  Visitors can enjoy conversations about the cultural impact of entertainment, intimate talks with curators, sneak peeks at objects from the national collection, film screenings of pop culture classics, free activities and musical performances.

Created in collaboration with the Americana Music Foundation, this opening event of the “Roots to Pop” series focuses on the importance of Blues music in the legacy of American popular music and its history as a musical scene. Featuring Blues legend Taj Mahal in conversation with Grammy-nominated singer-songwriter Allison Russell, this event will explore the history of American music and the careers of these two artists through discussion and song.

There will be very limited seating for this event.

Join Sesame Workshop’s Akimi Gibson, Rosita puppeteer/performer Carmen Osbahr, and cast member Alan Muraoka for a discussion of the history and mission of “Sesame Street” to represent and reach all young learners, especially those who have traditionally been underrepresented in children’s television.

There will be two opportunities to experience the classic 1939 film “The Wizard of Oz” in the home of the Ruby Slippers with screenings on Dec. 10 and 17. The Ruby Slippers will be on view in the “Entertainment Nation” exhibition.

The 1989 Tim Burton-directed film “Batman” will be screened in the museum’s theater on Dec. 11.

Join the creators of the Netflix series “Gentefied” to discuss Latinx representation on television and the individuals that are working to bring about change, with stories that center Latinx characters and strive to bring greater authenticity and visibility to their communities.

Julian “Cannonball” Adderley’s meteoric rise to stardom was the buzz of the New York jazz scene in 1955. The Smithsonian Jazz Masterworks Ensemble performs selections from Cannonball's career including "A Little Taste," "I've Never Been in Love Before," and "Spectacular" from his 1955–1958 recordings.