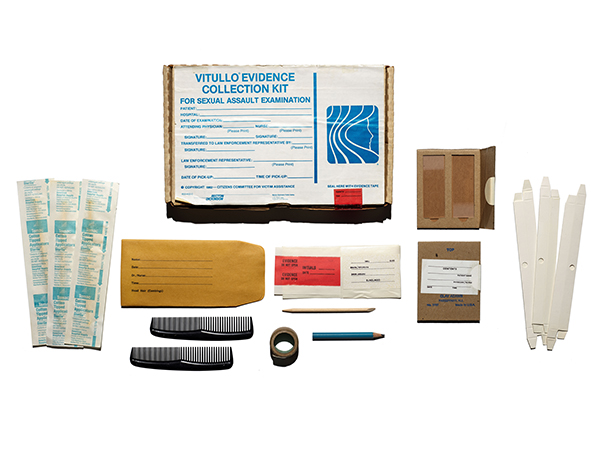 The Smithsonian’s National Museum of American History and Cooper Hewitt, Smithsonian Design Museum mark Sexual Assault Awareness Month this April by announcing the joint acquisition for the Smithsonian’s permanent collections of the “Vitullo Evidence Collection Kit for Sexual Assault Examination,” the innovation that helped accelerate successful investigation and prosecution of sexual assault in the United States and whose influence continues to this day.

Martha “Marty” Goddard (1941–2015) generated the idea for the kit between 1972 and 1978 when she worked as a women’s rights advocate and founded the Citizens Committee for Victim Assistance in Chicago. Goddard understood the pain and stigma surrounding rape and realized that thousands of sexual assault cases had low prosecution rates because there was no standardized procedure for collecting and preserving evidence. Along with colleagues, she undertook a research and development process that involved interviewing policymakers, law enforcement agents, attorneys and hospital workers in a quest to understand how survivors were treated and how evidence was collected. Her goal was to design a new system to increase the probability of suspects and criminals being identified and prosecuted.

Goddard envisioned a kit that standardized the process of collecting and preserving evidence that would contain all the tools for evidence collection in one box and provide instructions for collection, documentation and counseling resources for survivors. She presented her design for a kit to Louis Vitullo (1924–2006), a Chicago police sergeant in the city’s crime lab. Soon after the meeting, he introduced the “Vitullo Evidence Collection Kit for Sexual Assault Examination.” Goddard advocated for the kit’s implementation and worked to distribute it into the public safety system.

In researching the history of the kit, the Smithsonian curatorial team considered the significance, impact and historical contributions of the object. Versions of these kits, commonly known as “rape kits,” are standard protocol in hospitals across the nation and the world. Goddard’s work continues to stand as an enduring and powerful innovation today, as a sexual assault is attempted every 68 seconds in the U.S.

“Sexual assault is among the most frequently occurring crimes in our country while also being the most underreported and prosecuted, and probably the least understood” said Katherine Ott, curator of medical history at the National Museum of American History. “This kit prompts us to link a range of histories, and with it we can expand upon and connect what we already know about women’s activism, forensic science and gender relations to the history of sexual violence and our cultural reluctance to talk about it.”

“This kit is constructed of simple, familiar materials that become a powerful instrument of change when assembled together with instructions,” said Alexandra Cunningham Cameron, curator of contemporary design at Cooper Hewitt, Smithsonian Design Museum. “Bringing this kit into the collection of the national design museum challenges an enduring perception that design is solely a product created by an expert for a consumer, rather it advocates design as a means of social transformation available to anyone irrespective of formal training.”

The acquisition of the kit received support from the Smithsonian American Women’s History Initiative #BecauseofHerStory.

This kit joins the Smithsonian’s existing collections of inventions, women’s and medical histories and modern design, including the first polygraph used for lie detection and home pregnancy test, and it demonstrates the Smithsonian’s commitment to recovering and sharing untold histories. The Smithsonian has organized an Institution-wide initiative looking to leverage research, collections and interdisciplinary expertise to address the histories and ongoing crises of sexual assault in the United States. Five Smithsonian units have come together to form “Marty’s Group,” which aims to spotlight the ways Americans have combatted sexual assault through grassroots activism, artistic confrontation and political advocacy. By uplifting the work and stories of others, the group intends to increase awareness and education through research, programming and displays focused on key issues related to the health and wellness of women and all people.

Although the kit is currently not on display, it is available online.

About the National Museum of American History

Through incomparable collections, rigorous research and dynamic public outreach, the National Museum of American History seeks to empower people to create a more just and compassionate future by examining, preserving and sharing the complexity of our past. The museum, located on Constitution Avenue N.W., between 12th and 14th streets, is open daily except Dec. 25, between 10 a.m. and 5:30 p.m. Admission is free. The doors of the museum are always open online and the virtual museum continues to expand its offerings, including online exhibitions, PK–12 educational materials and programs. The public can follow the museum on social media on Twitter, Instagram and Facebook. For more information, go to https://americanhistory.si.edu.

Cooper Hewitt is America’s design museum. Inclusive, innovative and experimental, the museum’s dynamic exhibitions, education programs, master’s program, publications and online resources inspire, educate and empower people through design. An integral part of the Smithsonian, Cooper Hewitt is located on New York City’s Museum Mile in the historic, landmark Carnegie Mansion. Steward of one of the world’s most diverse and comprehensive design collections—over 215,000 objects that range from an ancient Egyptian faience cup dating to about 1100 B.C. to contemporary 3D-printed objects and digital code—Cooper Hewitt welcomes everyone to discover the importance of design and its power to change the world. For more information, visit www.cooperhewitt.org or follow @cooperhewitt on Instagram, Facebook, Twitter and YouTube.