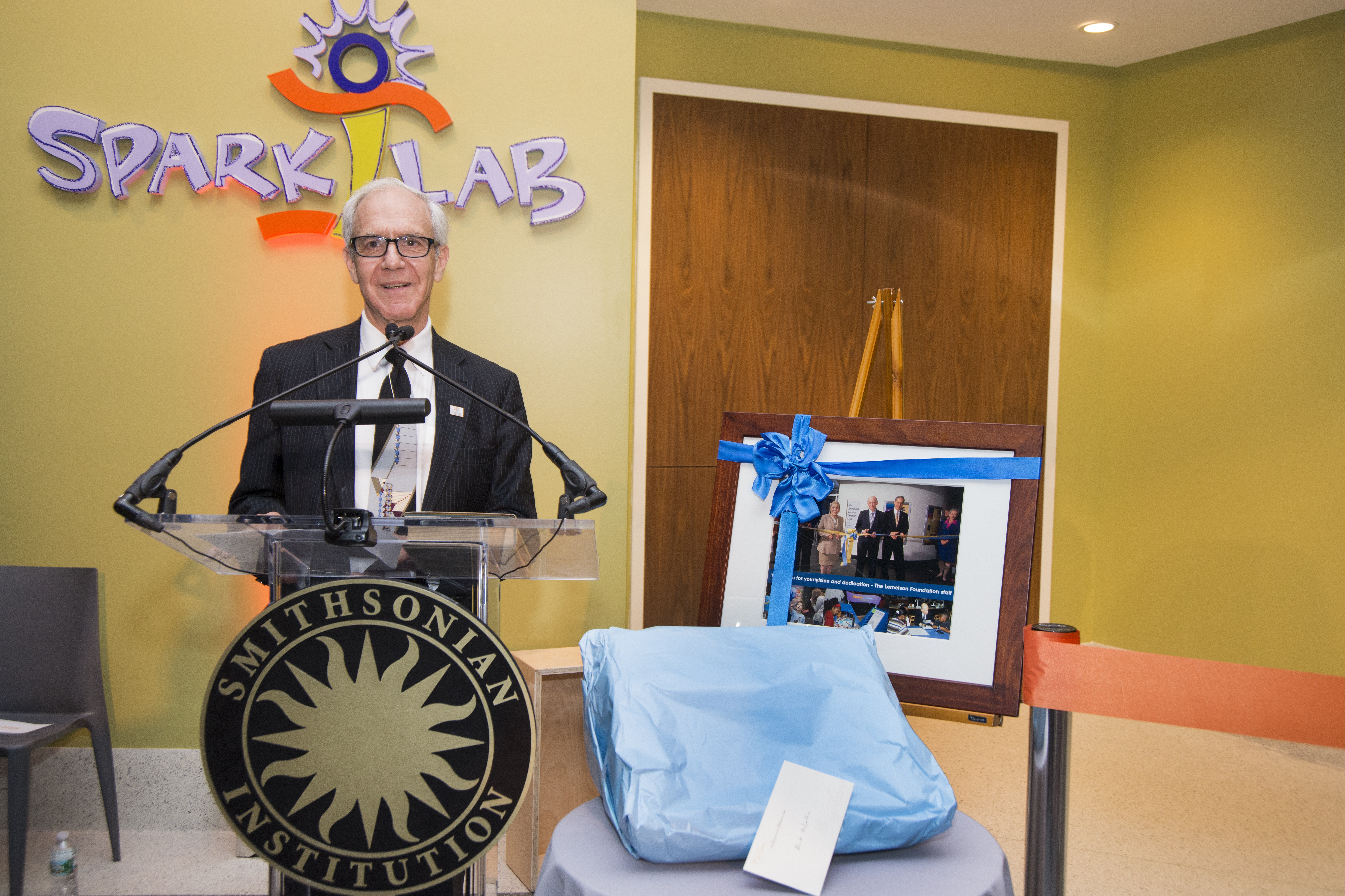 Portland, OR, June 29, 2015 – The Lemelson Foundation, the world’s leading funder of invention in service of social and economic change, today announced endowment of the Arthur Molella Distinguished Fellowship at the Smithsonian’s National Museum of American History (NMAH). Honoring Dr. Arthur Molella’s long career of scholarship in the history of science and technology, the $780,000 endowment will establish a scholar-in-residence program at the museum’s Jerome and Dorothy Lemelson Center for the Study of Invention and Innovation. A public historian for over four decades, Dr. Molella has served as the director of the Lemelson Center for more than 20 years. He will step down from that post this summer but continue to work with the center in an emeritus role.

“Art Molella is a scholar who is able to interpret history in a way that informs how we look to the future. Jerry and I were so fortunate to meet Art when we first approached the Smithsonian over 20 years ago. His leadership and detailed focus on invention and its influence on the U.S. economy have created a valuable awareness of invention and entrepreneurship within and outside the walls of the Smithsonian. It has been a true pleasure to work with such a fine individual. I will never be able to express the depth of my gratitude to Art. He is a dear friend who has carried Jerry’s dreams forward,” said Dorothy Lemelson, chairman of The Lemelson Foundation.

The Arthur Molella Distinguished Fellowship is endowed by The Lemelson Foundation in recognition of his scholarly contributions in recording and celebrating the history and importance of invention and innovation. The endowment will establish a scholar-in-residence program at the Lemelson Center to support residencies of inventors, entrepreneurs, writers, or senior scholars for up to one year. Funding will cover travel expenses to consult with the center’s staff, present lectures, and advise on projects.

Dr. Molella received his Ph.D. from Cornell University and an Honorary Doctorate in Science from Westminster University, London. He came to the Smithsonian to study the papers of Joseph Henry, the Smithsonian’s first secretary and a renowned physicist and inventor, resulting in “The Papers of Joseph Henry, Vols. 1-4,” of which Molella was an assistant editor. His 40 years at the Smithsonian has resulted in academically challenging and engaging exhibitions such as “Science in American Life,” “From Frying Pan to Flying V: The Rise of the Electric Guitar,” “Nobel Voices: Celebrating 100 Years of the Nobel Prize,” the award-winning “Invention at Play,” “Making a Modern Museum: Celebrating the 50th Anniversary of the National Museum of American History” and “Places of Invention” which opens July 1.

He has led an environment of intellectual rigor and curiosity at the Lemelson Center and the National Museum of American History, publishing and lecturing widely on the relations between science, technology, and culture. His publications include “Inventing for the Environment” (edited with Joyce Bedi, MIT Press, 2003), “Invented Edens: Techno-Cities of the 20th Century” (with Robert Kargon, MIT Press, 2008), and the upcoming volume “Places of Invention” (edited with Anna Karvellas, Smithsonian Scholarly Press, 2015).

“The Fellowship provides a unique opportunity for senior scholars in innovation and invention to develop ideas and contribute thinking from their fields to programming at the Smithsonian,” said Carol Dahl, executive director of The Lemelson Foundation. “It also offers a wonderful opportunity for the Lemelson Center to keep thinking fresh while honoring Art’s amazing scholarship and interdisciplinary approach to learning.”

The Foundation has also given a $40,000 grant to the Lemelson Center to support Dr. Molella’s research, writing, and speaking engagements as he transitions to an emeritus director role.

“With this new gift, The Lemelson Foundation will help ensure that the ground-breaking innovation work done by Art Molella continues through an infusion of new scholars who will enrich the original research conducted by the museum and, in turn, enable us to share this knowledge with our millions of annual visitors,” said John L. Gray, director of the National Museum of American History.  “Art has shaped the Lemelson Center into a leading 21st century public research institution and we look forward to his continuing contributions, as well as to the future growth of the center.”

About The Lemelson Foundation

Based in Portland, The Lemelson Foundation uses the power of invention to improve lives. Inspired by the belief that invention can solve many of the biggest economic and social challenges of our time, the Foundation helps the next generation of inventors and invention-based businesses to flourish. The Lemelson Foundation was established in the early 1990s by prolific inventor Jerome Lemelson and his wife Dorothy. To date the Foundation has made grants totaling more than $190 million in support of its mission. For more information, visit http://lemelson.org.

The Lemelson Center has led the study of invention and innovation at the Smithsonian since 1995. The center’s activities advance scholarship on the history of invention, share stories about inventors and their work, and nurture creativity in young people. The center is supported by The Lemelson Foundation and located in the National Museum of American History. The Lemelson Hall of Invention and Innovation will open July 1 and is a signature part of the museum’s new 45,000-square-foot Innovation Wing. The Hall is home to two exhibitions, “Places of Invention” and “Inventive Minds,” and includes the hands-on invention center Draper Spark!Lab. http://invention.si.edu.