“The Lion King” Roars into the Smithsonian 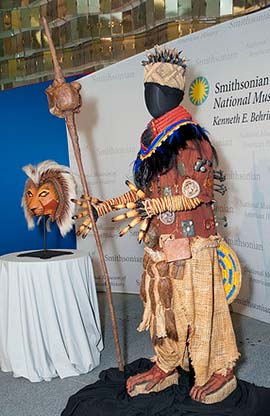 In a special ceremony today, Disney Theatrical Productions donated objects from the Tony and Olivier Award-winning musical “The Lion King” to the Smithsonian’s National Museum of American History. Costume elements from the show’s protagonist Simba and the tribal shaman Rafiki will join objects from the Broadway musicals “Cats,” “Rent” and the “King and I” in the museum’s permanent entertainment collections.

Designed by Julie Taymor, the costume components include Simba’s stylized lion mask and headdress—co-designed by Michael Curry—and the costume, custom shoes and hat designed for Rafiki. The donated items were conceived for the original Broadway production of “The Lion King,” which opened Nov. 13, 1997.

“Taymor’s designs bring the story of Simba the lion cub, fulfilling his destiny to become king in the African Pride Lands, to life,” said Brent D. Glass, director of the museum. “This donation is a significant addition to the museum’s entertainment collection and joins materials representative of Broadway hits.”

The Simba mask-headdress is made of carbon graphite, a lightweight but durable material cast from a silicone mold, paint and polyester fibers. The Rafiki costume is made of cotton fabric, decorated with metal amulets and a horsehair collar. The hat is made of textured kente cloth, and the custom shoes are made of rubber.

“It is a tremendous honor to see Taymor’s groundbreaking creative vision recognized by a world-renowned organization like the Smithsonian,” said Thomas Schumacher, producer and president of Disney Theatrical Productions. “‘The Lion King’ is more than a musical—it has become a global phenomenon, and this donation forever seals its place as an icon of American culture in one of our country’s leading history museums.”

Entrusted by Schumacher, Taymor, a designer and director, has garnered acclaim for her innovative productions combining actors, masks, puppetry, ritual and large theatrical landscapes. Taymor was chiefly responsible for the transformation of the 1994 Disney animated film into a Broadway musical. The costume elements are representative of Taymor’s achievement, which blends elements of African art and Broadway artisanship to depict the anthropomorphic animal characters. In 1998, Taymor won the Tony Award for Best Costume Design and Best Direction of a Musical for “The Lion King.” Taymor is the first woman to win the Tony Award for Best Direction of a Musical.

Now in its 12th year, “The Lion King” recently surpassed the 50-million mark in worldwide attendance, becoming the first American musical to reach that milestone. It has won more than 70 major awards worldwide, including the 1998 Tony Award and the New York Drama Critics’ Circle Award for Best Musical, the 1999 Grammy for Best Musical Show Album and the 1999 Laurence Olivier Awards for Best Choreography and Best Costume Design.

These Lion King objects join a rich collection of artifacts with Broadway origins, including costumes from the Broadway productions of “Hello, Dolly!,” “Fiddler on the Roof,” “This Is the Army,” “Kiss of the Spider Woman,” “Mame” and “Lorelei”; theater awards, including three Tony Awards; props from the musical “The Fantasticks”; Rose Marie’s copy of the musical score of “Top Banana”; and numerous Broadway playbills and posters. The museum’s Archives Center also has a number of other theatrical scripts, video and audiotapes in its Luther Davis Collection.

The National Museum of American History collects, preserves and displays American heritage in the areas of social, political, cultural, scientific and military history. To learn more about the museum, visit https://americanhistory.si.edu. For Smithsonian information, the public may call (202) 633-1000, (202) 633-5285 (TTY).