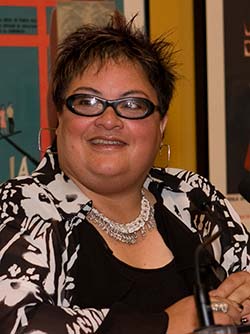 Marvette Pérez, an anthropologist by training and curator of Latino History and Culture at the Smithsonian’s National Museum of American History, died peacefully in her sleep on August 19. Born in Arecibo, Puerto Rico, on June 27, 1961, Pérez earned a B.A. from Florida State University in 1982, went on to receive a M.A. at Catholic University of America in 1986 where she was a doctoral candidate.

For the past 16 years she was engaged in collecting, researching, publishing, lecturing, and developing programs related to Latinos in the United States as well as the connections with other Latin American and Caribbean countries.

Through many exhibitions, Pérez was able to share stories about the U.S. Latino experience with broad audiences from around the world. Pérez curated or co-curated a number of important exhibitions, including Azúcar!: The Life and Music of Celia Cruz; Hip-Hop Won’t Stop: The Beat, The Rhymes, The Life; Moda y Música: Stage, Fashion and Style; A Collector’s Vision of Puerto Rico: The Teodoro Vidal Collection; 1848: New Border, New Nation; Ritmos de Identidad: Fernando Ortiz’s Legacy and the Howard Family Collection of Percussion Instruments; Posters from the Division of Community Education (DIVEDCO) of Puerto Rico, 1949-1989 with the Smithsonian Latino Center; and most recently, Not Lost in Translation: The Life of Clotilde Arias. A firm believer in collaborations, Pérez, among her other projects, led the community curation of the Latino Gay Lesbian Bisexual and Transgender Organizations in Washington, D.C., 1987-Present exhibition at the Historical Society of Washington, D.C. This exhibition was spearheaded by the Latino GLBT History Project of D.C. to provide an overview of the history of queer Latino organizations and community building.

Lee Baker, Associate Professor of Cultural Anthropology, Duke University said, "[Pérez] is a big and bold thinker, and she has a vision that captures the tone, tenor, and the mission of the Smithsonian.... She also has a theoretically sophisticated, subtle, and indeed counter hegemonic perspective that informs her curatorial practices and makes her projects appear to be informative and entertaining on one hand, while having a bit of an edge, critique, and bite on the other."

Colleague Vilma Santiago-Irizarry, Associate Professor, Cornell University, said, "[Pérez’] keen sense for both historical depth and sociocultural breadth give her curatorial work additional dimensions of understanding and bring out the multiplicity of meaning they embody, not by becoming arcane and abstract, but through their concretization in her astute selection and combination of visual, textual, auditory, and material resources."

In concurrence with her exhibition works, Pérez was instrumental in acquiring important collections related to Latino popular culture and music, such as a set of timbales belonging to Tito Puente as well as full costumes from the legendary Latin singer Celia Cruz. Pérez also collected prison art from New Mexico and posters from the Division of Community Education in Puerto Rico. In 1997 she acquired the Vidal Collection of Puerto Rican material culture capturing the island’s history from the 16th to the 20th centuries through thousands of objects, making it the most important and complete collection of its kind.

In addition to her collecting, Pérez led the Latino Music Oral History Project, which documented the lives of Latino musicians through extensive Oral History interviews. In 1998, she served as the curatorial consultant for the exhibition Latin Jazz: La Combinación Perfecta, which toured throughout the U.S. with the Smithsonian Traveling Exhibition Service. She also served as consultant to the exhibition Substance and Soul, about the conservation and historical importance of Latin American santos, or carved wood images of saints.

Pérez was an accomplished musician and vocalist who performed locally with groups such as Cantaré and Coral Cantigas. She will be remembered for her creativity and vision, along with her passion to see the story of Latin Americans told. She was an invaluable member of the museum community and will be deeply missed by her friends and colleagues.