Measuring Worth at the Smithsonian’s National Museum of American History

“The Value of Money” Exhibition to Showcase Numismatic Rarities
March 4, 2015 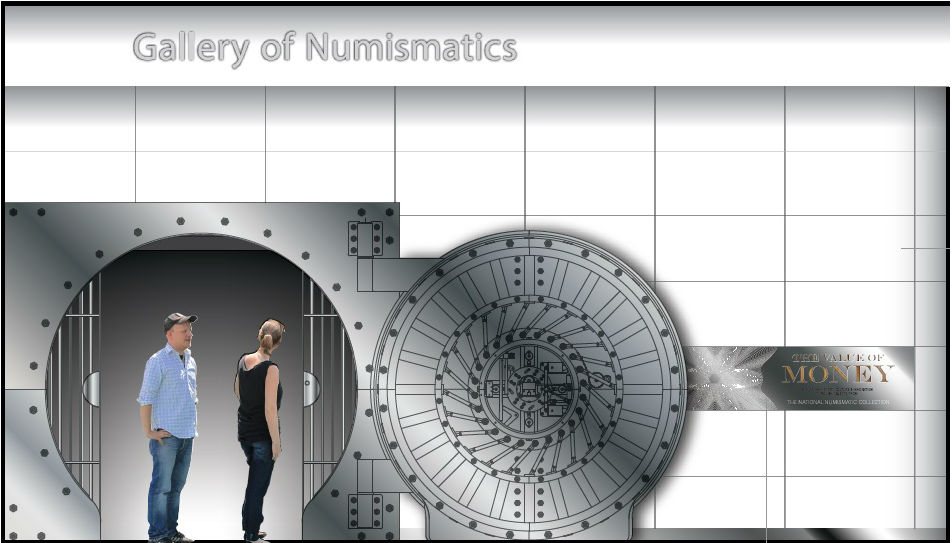 A vault door will mark the entrance to the National Museum of American History’s new Gallery of Numismatics and its inaugural exhibition, “The Value of Money.” Opening July 1, the gallery will delve into the National Numismatic Collection (NNC)—one of the Smithsonian’s oldest and most treasured collections—to uncover stories related to the origins, innovations, messages, artistry and allure of money.

“The Value of Money,” will be part of the museum’s history-plex of galleries, experiential learning places and performance spaces centered on the theme of innovation. It will showcase more than 400 objects from the NNC, some of which are among the rarest in the world. The exhibition will link American history to global histories of exchange, cultural interaction, political change and innovation. Thematically organized into five sections, the exhibition will allow visitors to learn about the origins of money, new monetary technologies, the political and cultural messages money conveys, numismatic art and design, and the practice of collecting money.

“While ‘The Value of Money’ exhibition will honor some of the most monumental currencies in the world, it will also allow visitors to connect with the cultural impact money has made in advancing American society into the nation it is today,” said John Gray, director of the museum.

Featured American objects will include a storied 1933 Double Eagle, a personal check signed by President James Madison in 1813, a 1934 100,000 dollar note and a Depression-era one dollar clam shell. International artifacts include a 465 BC Decadrachm coin from Syracuse, Sicily, a 14th-century Ming Note from China and a 1626 8 Real Coin from Bolivia, known as a Spanish Piece of Eight.

The museum’s numismatics curators are documenting emerging monetary technologies to show how methods of payment have evolved from coins and paper money to increasingly cashless transactions. One of the recent acquisitions that will be included in the exhibition is a small plastic device called a Square Reader. It plugs into a mobile device through an audio jack and processes credit transactions for debit and credit cards. With the use of a mobile application, small and mobile businesses have the ability to process a purchase through a smart phone or tablet with a swipe of a credit card.

Square technology was invented by entrepreneur Jack Dorsey and computer science engineer Jim McKelvey. The idea emerged because McKelvey, who also is a glass artist, was having difficulty accepting large payments for the sale of his artwork. When unable to process credit card payments from his clients, he and Dorsey began working on a portable and inexpensive method of processing debit and credit card sales. A recent donation by Square has provided the NNC with several versions of Square technology.

The world-class NNC collection of more than 1.6 million objects was made possible by transfers from the U.S. Treasury, the U.S. Mint and the U.S. Bureau of Engraving and Printing as well as through donations from private collectors.

“The Value of Money” exhibition is made possible through the leadership support of Bill Gale, the Lilly Endowment Inc., Lee and Saundra Minshull, Charles and Hilda Anderson, Joel and Carmen Anderson, the Numismatic Guaranty Corp., Dr. and Mrs. Andrew A. Shiva, Stack’s Bowers Galleries, Vault Structures Inc., Jeff and Mary Lynn Garrett, Crane & Co., Brian and Barbara Hendelson, The Noxon Family, and PMX Industries, as well as an anonymous donor and other contributions from the numismatic community.

Through unrivaled collections, rigorous research and dynamic public outreach, the National Museum of American History explores the richness and complexity of American history. The museum helps people understand the past in order to make sense of the present and shape a more humane future. For information, visit https://americanhistory.si.edu Located at 14th Street and Constitution Avenue N.W., the museum is open daily from 10 a.m. to 5:30 p.m. (closed Dec. 25).