Miss Piggy Joins Kermit the Frog at the Smithsonian

More Than 20 Puppets and Props Donated from the Jim Henson Family
September 24, 2013 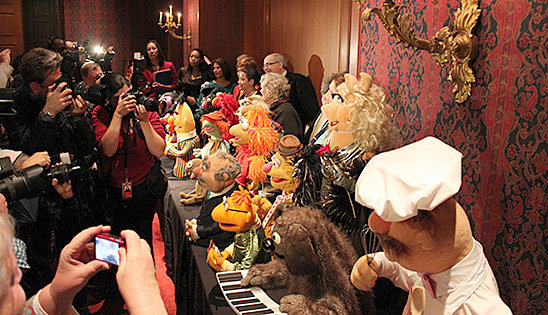 The National Museum of American History received a new donation of more than 20 Jim Henson puppets and props on the anniversary of his birthday—Sept. 24, 1936—from the Henson family. Miss Piggy and the Swedish Chef from The Muppet Show, Bert and Elmo from Sesame Street, and Red Fraggle and Traveling Matt from Fraggle Rock are among the new additions. They will join the museum’s current Jim Henson Collection, which includes Oscar the Grouch, Kermit the Frog and the cast of Sam and Friends.

“No American artist has appealed to and affected as many people in different age groups and cultures the way Jim Henson has,” said John Gray, director of the museum. “The off-beat humor, zany characters and educational messages created the perfect combination of comedy and storytelling for classic shows that continue to entertain and teach audiences worldwide.”

Many of the donated puppets are the first constructions of these characters and represent Henson’s work in early television commercials and shows that include The Muppet Show (1976-1981), Fraggle Rock (1983-87) and Sesame Street (1969–present). In addition, his collaborations with artist Brian Froud for the 1982 feature film The Dark Crystal, which brought to view Henson’s advances in animatronics, will be represented in the collection with a Skeksis figure and SkeksisChair. The puppets and props were designed and created at the Jim Henson Workshop in New York City, with the exception of the figures from The Dark Crystal, which were created at the Jim Henson Creature Workshop in London.

“Jim Henson captured both the imagination and attention of diverse audiences all around the world with masterfully integrated design and film elements, and witty skits and stories that were both outlandish and charming at the same time,” said Dwight Blocker Bowers, curator in the museum’s Division of Arts and Culture. “The life and legacy of Henson will be remembered through the numerous characters that makeup this exciting collection.”

Henson, one of the leading innovators of 20th-century entertainment, was an American puppeteer, screenwriter, film director and producer who brought the ancient art of puppetry into the modern age. He began his career in 1954, while still in high school, and continued until his untimely death in 1990. Henson’s legacy continues through The Jim Henson Foundation’s efforts to promote and develop the art of puppetry in the U.S., and through The Jim Henson Legacy—established by his late wife, Jane Henson, in 1992—which continues to preserve and present the artistic contributions of Henson and his work.

The museum will place Miss Piggy on view within the American Stories exhibition in March 2014. In addition, several of the puppets from the Jim Henson Collection—including the original Kermit, not yet a frog, and Cookie Monster—will go on view later this year in a display case that will include marionettes, hand puppets and ventriloquist figures. This display will explore the role these iconic characters have played in American culture and the impact they have had on popular entertainment. Henson’s life and work will be explored by author Brian Jay Jones in the upcoming book, Jim Henson: The Biography, which will be officially released Sept. 24.

Through its collections, research and public outreach, the National Museum of American History explores the infinite richness and complexity of American history. It helps people understand the past in order to make sense of the present and shape a more humane future. The museum is currently renovating its west exhibition wing, developing galleries on business, democracy and culture. For more information, visit https://americanhistory.si.edu. The museum is located at 14th Street and Constitution Avenue N.W., and is open daily from 10 a.m. to 5:30 p.m. (closed Dec. 25). Admission is free. For Smithsonian information, the public may call (202) 633-1000.

To see photos of the donation, the puppets, plus behind the scenes conservation work, view our Flickr set. 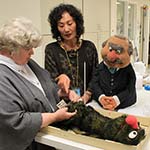 Check out our blog post on conserving the Jim Henson puppets.