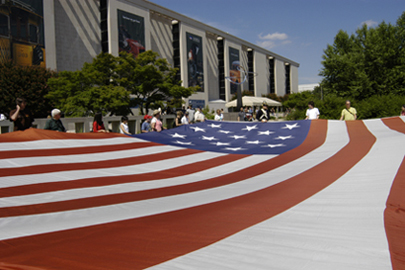 The Smithsonian’s National Museum of American History will commemorate the U.S. flag’s 232nd birthday with its annual “Flag Day Family Celebration.” With its “broad stripes and bright stars,” the American flag is the symbol of our nation. The free festival, Sunday, June 14, from 10 a.m. – 5 p.m., will feature music, theatrical performances and other activities.

Flag Day festivities will begin with a performance of the Star-Spangled Banner by Jordan Shelton, the winner of the museum’s online National Anthem Singing Competition. Shelton was chosen from 15 semi-finalists who were selected according to popularity on YouTube, vocal performance, originality and accuracy of lyrics. A diverse group of 868 people from all age groups, ethnic backgrounds and across the country originally entered in the contest. The top video was chosen by a panel of celebrity judges and representatives from the Smithsonian, the Baltimore Orioles and USA Weekend Magazine. Shelton’s performance can be found at http://www.youtube.com/watch?v=mq6-hxM94i4.

“As home to the Star-Spangled Banner, Flag Day is a special day for us at the museum,” said Brent D. Glass, director of the museum. “We invite the public to come and engage with their flag and their history through an exciting array of programming.”

The Flag Day kick-off will also feature a children’s citizenship ceremony where 28 children ages 5 to 16 years and representing 15 countries will take a special Oath of Allegiance and receive Certificates of Citizenship from the U.S. Citizenship and Immigration Services.

In addition, the day’s activities will include performances by the Fifes and Drums of York Town and the folding of a full-size reproduction of the Star-Spangled Banner. Visitors can view the original Star-Spangled Banner in its state-of-the-art gallery, where the history of the War of 1812 and the making of this almost 200-year-old flag is examined in a permanent exhibition. A complete schedule of Flag Day festival activities is attached and available at americanhistory.si.edu.

The Flag Day celebration is continued online at the museum’s Star-Spangled Banner Web site at americanhistory.si.edu/starspangledbanner. Here visitors can explore the flag in-depth and post their photos and stories about the flag, which will become part of a mosaic image of the flag.

Note: This schedule is subject to change. Visitors should check with the Welcome Center on the second floor and the information desk on the first floor for a complete schedule.

Performances by the Fifes and Drums of York Town, the children’s citizenship ceremony, and the singing of the Star-Spangled Banner by the winner of the National Anthem Singing Competition.

This theater program features an actor portraying Mary Pickersgill and allows visitors to meet the seamstress who in 1813 sewed the Star-Spangled Banner, the flag that inspired the national anthem. Visitors will learn about the flag’s history and help assemble the huge garrison flag, lay out the 15 stars and hear the personal stories of the people behind its creation.

Museum staff will lead visitors in folding a true-to-size replica of the Star Spangled Banner while giving a presentation on the history of the flag.

The National Museum of American History collects, preserves and displays American heritage in the areas of social, political, cultural, scientific and military history. To learn more about the museum, visit https://americanhistory.si.edu. For general Smithsonian information, the public may call (202) 633-1000.