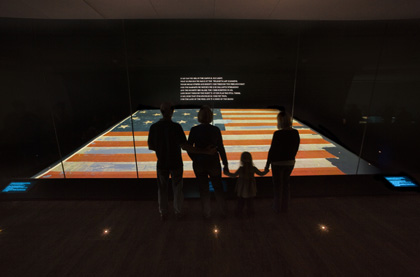 The Smithsonian's National Museum of American History will reopen its doors to the public Friday, Nov. 21, providing a new look at the almost 200-year-old Star-Spangled Banner—the flag that inspired the national anthem. The museum has constructed a custom-designed display for the flag, which recently underwent an extensive conservation treatment. The gallery is part of a two-year, $85 million renovation of the building's center core, which has dramatically transformed the museum's architecture.

"The Star-Spangled Banner is one of our nation's most treasured objects, a symbol of what this country stands for," said Brent D. Glass, director of the museum. "Its new surroundings are part of a strategic plan to ensure the long-term preservation of the flag, to revitalize the museum and help future generations experience what it means to be an American."

The Star-Spangled Banner Preservation Project was made possible by major support from Polo Ralph Lauren. Generous support was provided by The Pew Charitable Trusts, the Congress, the John S. and James L. Knight Foundation and the American Express Historic Preservation Fund. The conservation project is part of Save America's Treasures—a public-private partnership administered by the National Park Service and the President's Committee on the Arts and the Humanities.

"I was honored to be asked to help on the project to preserve the Star-Spangled Banner," said Ralph Lauren. "It has always been an inspiration to me, and I wanted it to continue to be an inspiration for generations to come. I am thrilled to see it displayed in all its glory; a constant symbol of what makes America great—our ideals, our courage and our faith in the future."

The new Star-Spangled Banner Gallery lies at the heart of the museum, the focal point of the dramatic five-story skylit atrium. An architectural representation of a waving flag—made up of 960 reflective tiles—frames the entrance to the gallery. As visitors enter, a companion exhibition sets the scene for a dramatic historic event: the Battle of Baltimore during the War of 1812, when this young nation survived an assault by the British.

A special enclosure, with a 35-foot floor-to-ceiling glass wall, will protect the fragile wool and cotton flag while providing maximum visibility to visitors. The chamber's lighting, mechanical, security and fire prevention systems, as well as the table upon which the flag rests and the new gantry (movable bridge) that museum staff will use to inspect the flag, are designed to work together to ensure long-term protection of the flag. The room has separate environmental systems maintaining a constant temperature of 68 to 72 degrees Fahrenheit and relative humidity of 50 percent. All support structures and mechanisms will be hidden from public view so that the flag appears to be suspended in the chamber.

The 30-foot by 34-foot banner will be displayed at a horizontal orientation and, in order to reduce stress to the textile, at a 10-degree angle of elevation. Low light levels will protect the flag, yet are dramatic enough to evoke an atmosphere of the "dawn's early light," similar to what Francis Scott Key experienced Sept. 14, 1814, when he wrote his famous lyrics. The first stanza of the national anthem is projected prominently on the wall above the Star-Spangled Banner. A tactile image of the banner and an interactive projection of the flag allow visitors to investigate key details about the flag, its history and how it was made. Upon leaving the viewing chamber, additional exhibits convey specific stories about the making of the Star-Spangled Banner: its meaning as a family keepsake, the efforts of the Smithsonian to preserve the flag for more than 100 years and how Americans have used the Star-Spangled Banner, both the flag and the song, to express diverse ideas of patriotism and national identity.

For a limited time, the exhibition will also include one of only three signed manuscripts of Key's lyrics of "The Star-Spangled Banner," on loan from the Historical Society of Pennsylvania.

"The Star-Spangled Banner: The Making of an American Icon," published by Smithsonian Books, an imprint of HarperCollinsPublishers, tells the dramatic story of the flag that inspired the national anthem for the first time in lavishly illustrated form. The book explores the broader meaning of the American flag in American life and was co-authored by current and former museum curators Lonn Taylor, Kathleen M. Kendrick and Jeffrey L. Brodie with a foreword by Ralph Lauren.

History channel, a donor through financial contributions and film production, will release a new, one-hour special about the flag's colorful history, including the specialized conservation treatment undertaken by the museum and the new high-tech flag chamber. "The Star-Spangled Banner: Saving the Flag" will air on History Nov. 29, at 7 p.m. ET/PT.

The National Museum of American History collects, preserves and displays American heritage in the areas of social, political, cultural, scientific and military history. Documenting the American experience from Colonial times to the present, the museum looks at growth and change in the United States. The museum is located at 14th Street and Constitution Avenue N.W., and is open daily from 10 a.m. to 5:30 p.m., beginning Nov. 21. To learn more about the museum, check https://americanhistory.si.edu For general Smithsonian information, call (202) 633-1000; (202) 633-5285 (TTY).