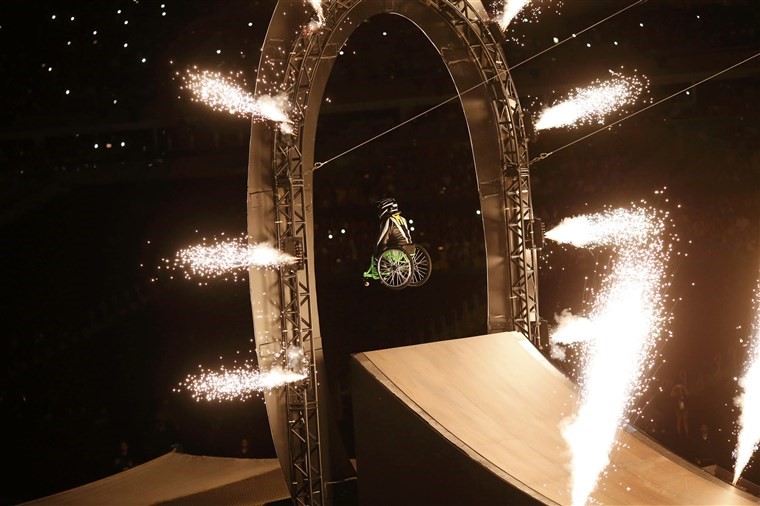 The skateboarding collection at the Smithsonian’s National Museum of American History will expand its representation of accessibility during a special ceremony Feb. 5 in which adaptive skateboarders Oscar Loreto Jr. and Dan Mancina and Wheelchair Motocross (WCMX) icon Aaron “Wheelz” Fotheringham will donate objects from their careers following the program Innovative Lives: Adaptive Skateboarding, WCMX, and Inventing Your Own Path, presented by the Smithsonian’s Lemelson Center for the Study of Invention and Innovation.

“A unique collaboration between the Lemelson Center and leaders of the international skate community, known as Innoskate, launched to celebrate invention and creativity in skate culture and share its history with diverse public audiences,” said Arthur Daemmrich, director of the Lemelson Center. “We want to perpetuate the belief that invention and innovation happen every day—often in unexpected places.”

During a panel discussion at the most recent Innoskate festival in 2019, accessibility took center stage as Loreto, Mancina and Fotheringham explained how they each use creativity and invention to overcome tremendous obstacles. The center is reprising the panel and continues to build upon the momentum of the topic of accessibility in sports.

Loreto uses prosthetics due to congenital birth defects to adapt to skateboarding to compete at the highest levels of competition, and he is the chair of the Paralympic Committee for USA Skateboarding. He will donate his Void Skateboards Andrew Hale Pro Model Deck which is a specially shaped deck he used in the Adaptive Skateboarding debut at the 2019 Summer X Games; his Venture prosthetic leg, which he credits for improving his skill level; and his Vans Shoe Anthony Van England Pro Model.

Mancina, diagnosed with a degenerative eye condition that left him blind at age 20, now skates using special canes, designs accessible skateboards and parks, and though blind, “changes how other people see.” He will be donating the first skateboard he modified using a specifically placed rolled up sticker under the grip tape so that he can quickly identify the nose of the board, which later evolved into the Real Actions Realized Braille board with beveled nose indicator; and his collapsible white cane with replaceable tips, used during many of his most meaningful personal accomplishments, designed to assist in judging the distance of objects, measure the length or height of obstacles, identify hazards or landmarks during skating and many other orientation methods.

Fotheringham, born with spina bifida, a birth defect of the spinal cord, is WCMX’s most influential pioneer who continues to push his sport to its absolute extremes. He will donate his Mega Ramp WCMX chair, built by custom-wheelchair builder Mike Box and designed to jump larger ramps. The chair was used by Fotheringham in over 40 Nitro Circus LIVE shows and is the same chair he used during the 2016 Summer Paralympics in Rio de Janeiro.

Innovative Lives is an award-winning program series that engages audiences of all ages and backgrounds in public conversations with diverse inventors, innovators and entrepreneurs about their pioneering work and careers. During this program, Loreto, Mancina and Fotheringham will encourage people of all ages and all abilities to invent their own path forward, and attendees will witness the addition of these artifacts into Smithsonian’s skateboarding collection. Highlights of the collection include: Tony Hawk’s first board, a 1975 Bahne skateboard made out of fiberglass and modified by his brother, Steve Hawk, who gave Tony the board in 1977; George Orton’s custom shark-painted helmet, used to set the world record, Sept. 15, 1996, at a speed of 61.87 mph—smashing the old record by 7 mph; and Mimi Knoop’s Alliance T-shirt worn during the 2006 Women’s vert contest at the X-Games.

Tickets for Innovative Lives: Adaptive Skateboarding, WCMX, and Inventing Your Own Path are still available. Visit https://2020innovativelives.eventbrite.com to register for free.

The Lemelson Center has led the study of invention and innovation at the Smithsonian since 1995. The center’s activities advance scholarship on the history of invention, share stories about inventors and their work and nurture creativity in young people. The center is supported by The Lemelson Foundation and located in the National Museum of American History. For more information, visit invention.si.edu.