The Smithsonian’s National Museum of American History, The Getty Conservation Institute, and The Getty Foundation Collaborate to Unravel Photography’s Most Controversial Mystery

Was the Inventor of the First Color Photograph a Genius, or a Fraud? New Research Reveals the Answer to a Much-Debated 156 Year-Old Mystery
October 28, 2007

LOS ANGELES—The Smithsonian's National Museum of American History (NMAH), the Getty Conservation Institute (GCI), and the Getty Foundation have teamed up to examine a 156 year-old mystery that remains, to this day, one of the most controversial questions in photography – and their research has revealed some rather surprising results.

One of the earliest forms of photography, the daguerreotype, is named after French artist and chemist Louis-Jacques-Mande Daguerre, who invented the process in 1839. Daguerreotype photography spread rapidly across the United States and just 11 years later, the Rev. Levi Hill of Westkill, N.Y., claimed for the first time to have invented a way to produce naturally colored daguerreotypes, or Hillotypes, as they became known. When Hill refused to release the details of his process until a patent was filed, the profession denounced him as a fraud. In 156 years, no definitive evidence has been presented to suggest that Hill was or was not an imposter, until now. 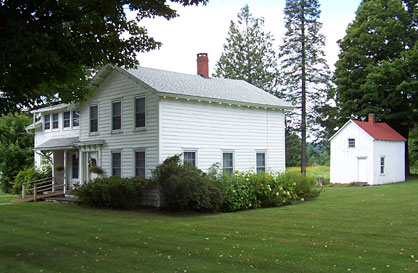 The small building in the back of the Hill family’s home is where Hill is thought to have conducted his experiments in color daguerreotype photography.

Using state-of-the-art technology, the 62 Hillotypes acquired by the Smithsonian in 1933 from Hill's son-in-law, John Boggs Garrison, finally gave up their secrets. Examination of a number of the Hillotypes by GCI scientists and curators from the Smithsonian’s photography collection have confirmed that Hill was indeed a genius – he did discover a method to create several natural colors in his photographs – but he also was a bit of a charlatan.

“After pressure mounted to produce additional colors, from this recent research it is clear that Hill began adding additional pigments to his color plates by hand, doctoring them to look more multi-hued than the originals,” confirmed Getty Conservation Institute senior scientist Dusan Stulik, who along with another GCI scientist, Art Kaplan, performed the analysis. “Hill was indeed a genius, but he was a flawed genius.” 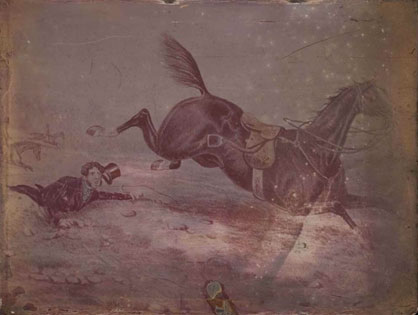 Hillotype of a print depicting a man fallen from a horse, color pigments applied.

Other important findings also have come to light from the team’s investigation. One revelation was that Hill’s 1856 book, which describes an extremely complicated process using a number of obscure and dangerous chemicals needed to create Hillotypes, was actually a creative smokescreen. When other photographers were unsuccessful in duplicating his Hillotypes, Hill could point to mistakes made during the arduous production method. Analysis showed that many materials and procedures described by Hill in the book were never actually used in any of the images analyzed by the team.

The Getty Foundation funded the Smithsonian’s efforts at research and survey work with a 2006 grant, which led to the discoveries made by the GCI and Smithsonian NMAH team.

“Importantly, the collaboration with the Getty also has provided information that will be key to developing a future conservation strategy for the Smithsonian’s Hillotype plates,” said Michelle Delaney, associate curator of the Photographic History Collection at the NMAH. Delaney initiated the project, along with independent conservator of photographs Corinne Dune, both of whom have an extensive background in photography and the conservation of photographic materials.

The daguerreotypes in the Smithsonian’s collection feature landscapes of Hill's house and of the village of Westkill, N.Y., as well as images of popular paintings and lithographs.

“We’re delighted to have been able to undertake this research collaboration with the Smithsonian’s National Museum of American History,” said Tim Whalen, director of the Getty Conservation Institute. “It’s exciting that by working together, we’ve been able to reveal the answer to this photographic mystery.”

Brent Glass, director of the Smithsonian’s National Museum of American History, agreed. "Our wonderful partnership with the Getty Conservation Institute and the Getty Foundation has reinforced just how remarkable Hill’s early photographic works really are. Knowing what we know now, it’s very clear that the historical importance of these 62 Hillotypes in the field of photography cannot be underestimated,” said Glass.

Deborah Marrow, director of the Getty Foundation, added, “This joint project demonstrates the importance of research to the understanding and conservation of works of art. My congratulations to the team on their fine work.”

The Hillotypes were examined using nondestructive reflectance Fourier transform infrared spectroscopy and X-ray fluorescence spectroscopy to identify metals, pigments and coatings. As well as the team of Stulik, Kaplan, Delaney, and Dune, others key advisors involved in the project included Grant B. Romer of the International Museum of Photography at the George Eastman House, along with other National Museum of American History staff.

This was not the first time the Getty investigated this mystery. In 1996, the Department of Photographs at the Getty Museum undertook a separate research effort involving Levi Hill, using the naked eye and standard magnification to review the daguerreotypes. Like researchers before and after them, the team was unable to definitively lay the controversy to rest.

The J. Paul Getty Trust is an international cultural and philanthropic institution that focuses on the visual arts in all their dimensions, recognizing their capacity to inspire and strengthen humanistic values. The Getty serves both the general public and a wide range of professional communities in Los Angeles and throughout the world. Through the work of the four Getty programs -- the Museum, Research Institute, Conservation Institute, and Foundation -- the Getty aims to further knowledge and nurture critical seeing through the growth and presentation of its collections and by advancing the understanding and preservation of the world’s artistic heritage. The Getty pursues this mission with the conviction that cultural awareness, creativity, and aesthetic enjoyment are essential to a vital and civil society.

The National Museum of American History collects, preserves and displays American heritage in the areas of social, political, cultural, scientific and military history. Documenting the American experience from Colonial times to the present, the museum looks at growth and change in the United States. The museum is currently closed for major renovations and will re-open in summer 2008. For more information, visit the Museum's Web site at https://americanhistory.si.edu/.