Notable celebrities are supporting the National Museum of American History in celebrating the 200th anniversary of the Star-Spangled Banner. Artists such as Aloe Blacc, Renée Fleming, Angie Johnson and Brian McKnight are encouraging Americans to take part in the museum’s coast-to-coast celebration. “Raise it Up! Anthem for America,” held on Flag Day, June 14, is a national sing-a-long event for people to come together and sing their anthem at 4 p.m. EDT. Details are at anthemforamerica.si.edu.

The National Park Service, Little League International, Girl Scout Council of the Nation’s Capital, the National Civic League, the John F. Kennedy Center for the Performing Arts and Chorus America are among more than 50 partners bringing audiences across the nation together for this celebration. Select Macy’s flagship stores in Chicago, New York, Philadelphia and Washington, D.C., will host anthem tributes showcasing the “Raise it Up!” campaign in store windows, on social media and with special events, including sing-a-longs.

“Two hundred years ago, Francis Scott Key, inspired by the sight of the flag’s ‘broad stripes and bright stars,’ wrote a song that gave new significance to a national symbol and started a tradition through which Americans have invested the flag with their own meaning and memories,” said John L. Gray, director of the museum. “It is an honor for the museum to be the home of the Star-Spangled Banner and to preserve it for future generations,” he added.

June 14 – July 6, the Maryland Historical Society is lending Francis Scott Key’s original manuscript of the “Star-Spangled Banner” lyrics, uniting it for the first time with the flag Key saw at “dawn’s early light.” Visitors will be able to see the 30-by-34-foot flag and the manuscript, side-by-side in the banner’s environmentally controlled chamber at the museum.

June 17, the Smithsonian will present designer Ralph Lauren, son of immigrants, with the James Smithson Bicentennial Medal during a naturalization ceremony welcoming 15 new Americans. The medal recognizes Lauren’s lifetime contributions to American artistry, entrepreneurship, creativity and vision. Lauren also played a leadership role in the preservation of the Star-Spangled Banner.

The anthemforamerica.si.edu website will feature an interactive timeline, “The Banner Yet Waves: 200 Years of the Star-Spangled Banner,” which will have traditional renditions of the anthem from the archives of Smithsonian Folkways Recordings as well as contemporary renditions and interviews with musical artists, including Blacc and Johnson.

To engage with “Raise It Up!” on Twitter use #raiseitup.

The Smithsonian Channel and the museum are collaborating on a documentary, “A Star-Spangled Story: Battle for America,” which premieres June 14 at 9 p.m. EDT. The film documents the story behind the 200-year-old anthem – from the burning of Washington to the creation of the iconic American flag – revealing the forgotten battle that could have changed the fate of the nation. 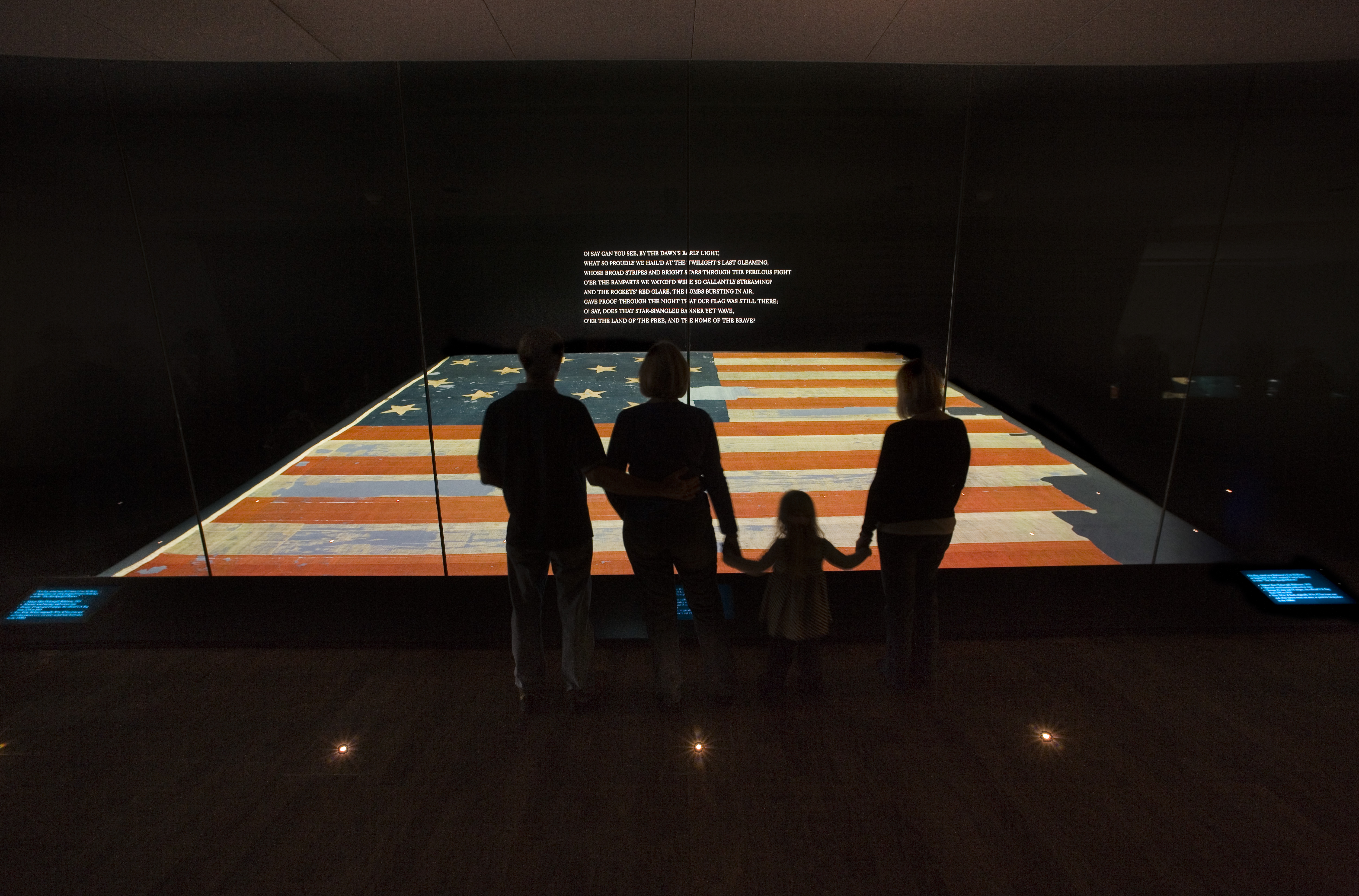 The Star-Spangled Banner on display in the National Museum of America History. 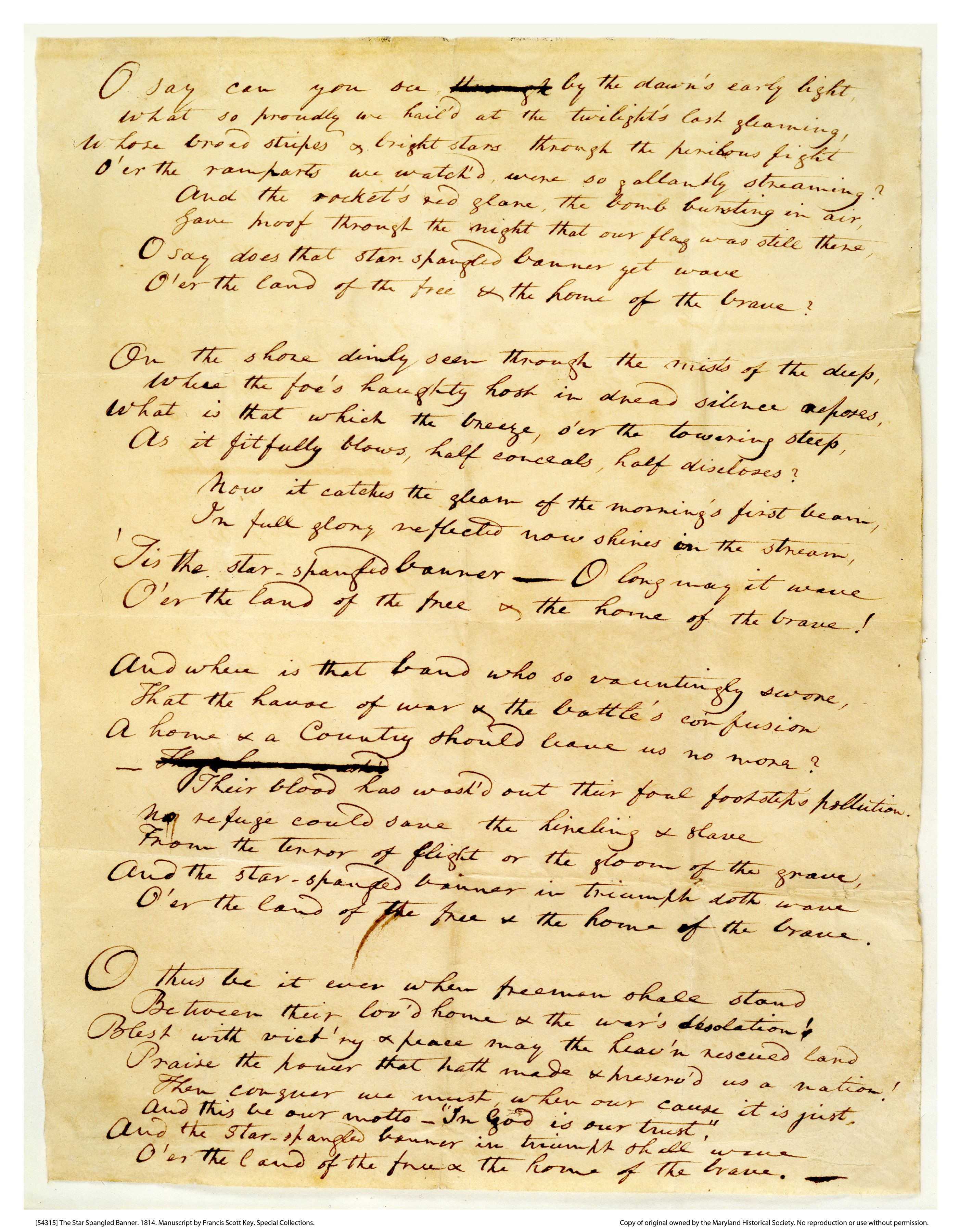 Disclaimer: Images of items in the Maryland Historical Society (MdHS) collection are property of MdHS. Images provided to you are only to be used for pre-approved projects that promote MdHS. Any other uses much be requested and permitted either directly by the Department of Imaging Services or the Director’s Office prior to use. Possession of an MdHS image does not constitute permission to publish or use the image. Permission to reproduce may not be transferred to a third party nor may any photographic materials, its derivatives or digital files be transferred to any other user. 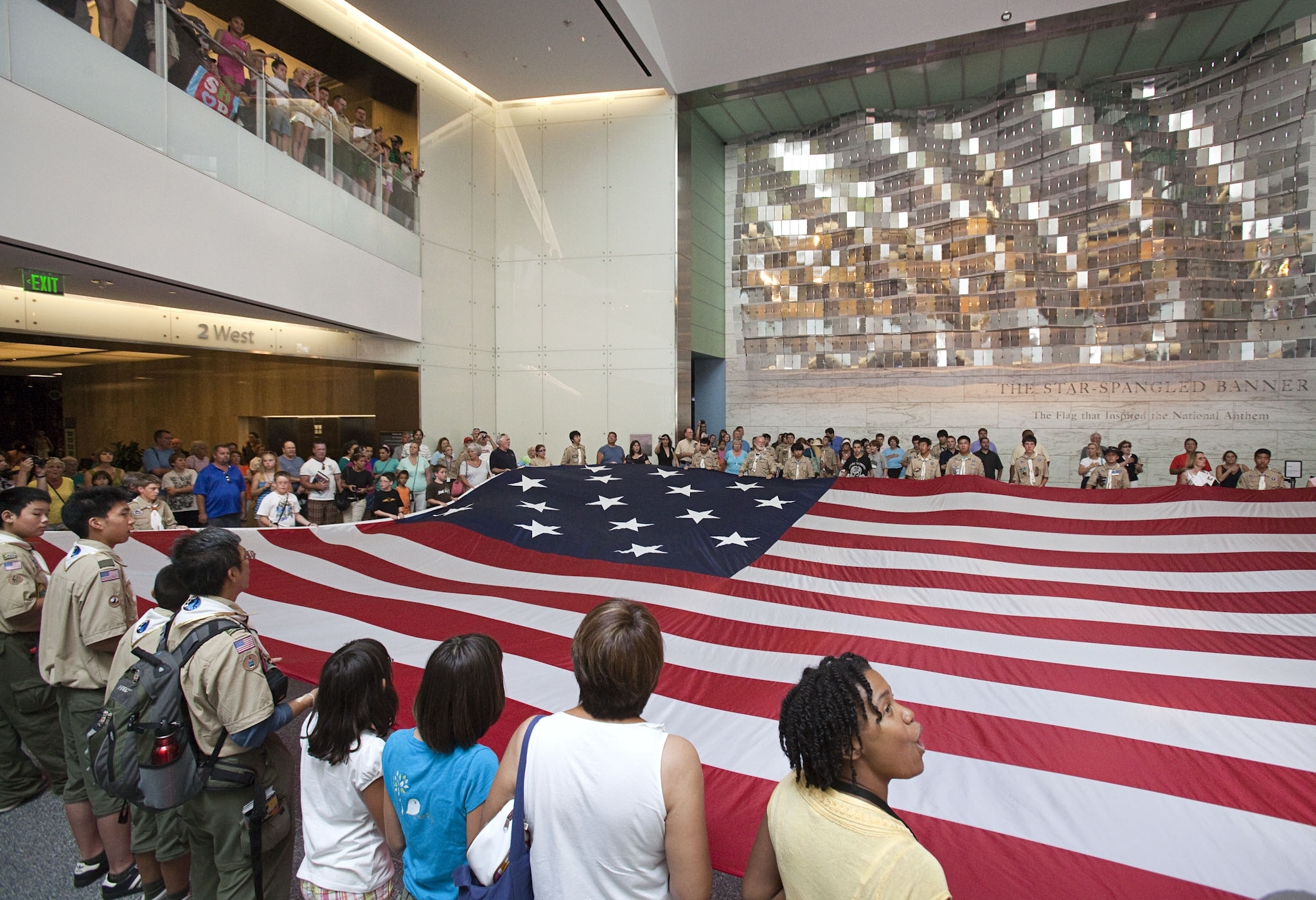 Museum visitors fold a replica of the Star-Spangled Banner as part of public program in Flag Hall.