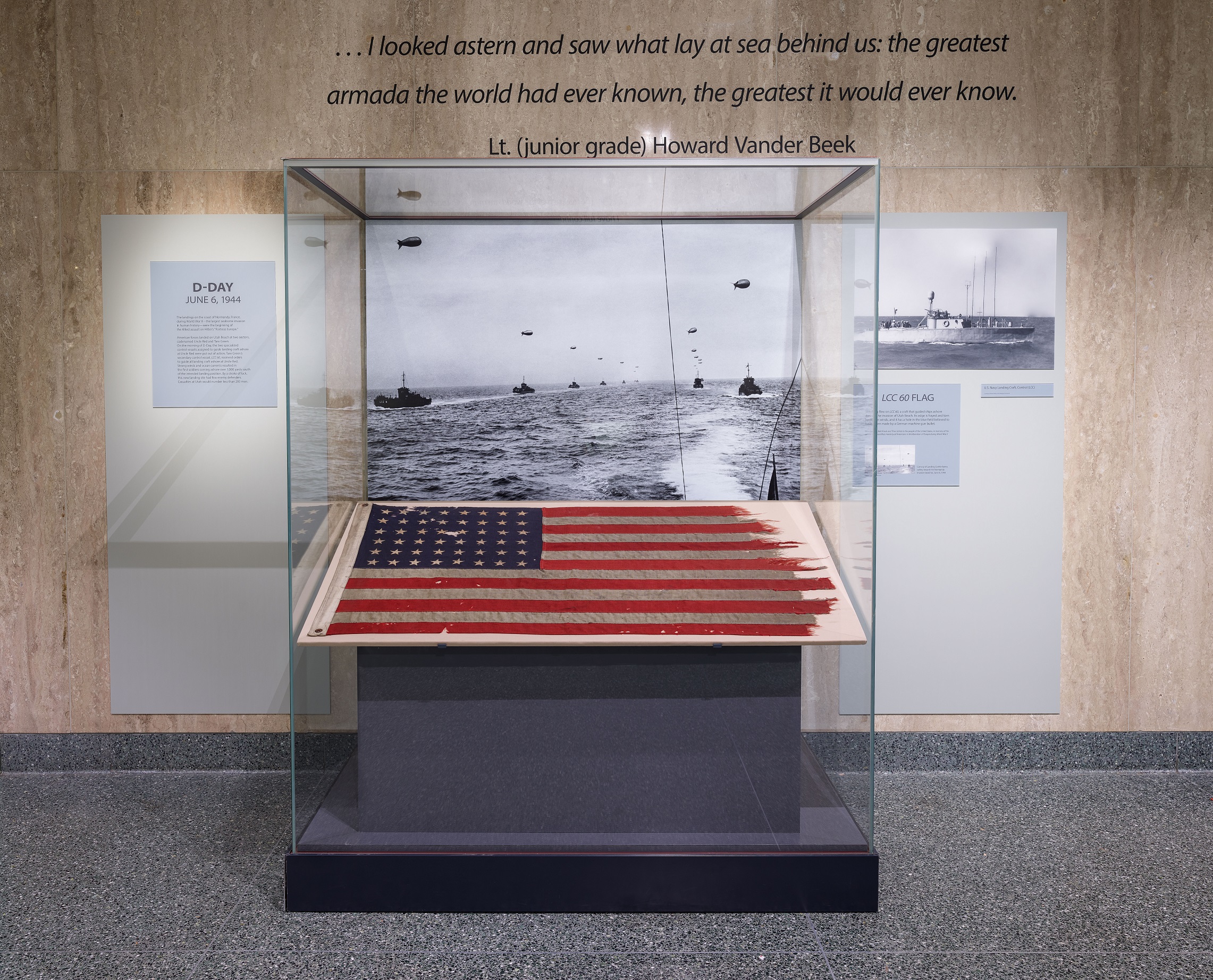 The Smithsonian’s National Museum of American History continues to document the historic D-Day events that unfolded June 6, 1944, with the display of a recently acquired 48-star flag flown on Landing Craft, Control 60 (LCC 60) off Utah Beach in Normandy, France. Dutch collector Bert Kreuk and his uncle Theo Schols donated the flag to the Smithsonian in a July 18 ceremony at the White House following a meeting between President Donald J. Trump and Prime Minister Mark Rutte of the Netherlands. It will be on view beginning July 26 as a new addition to “D-Day, June 6, 1944,” a recently opened display of select objects from the museum’s World War II collection to commemorate the 75th anniversary of D-Day.

“It is a great honor to be entrusted with this flag and to share it with the American people and all of our visitors,” said Anthea M. Hartig, the Elizabeth McMillan Director of the National Museum of American History. “Our collections speak to the power of the past and rare artifacts such as this flag take us back to pivotal historic moments such as the liberation of Europe from Nazi control. We are grateful to our Dutch donors for safeguarding and now returning this flag to the U.S. to become part of the National Collection.”

The 30-by-57-inch flag features two steel grommets set in a canvas edge and 48 stars representing the existing states. The banner shows discoloration and staining from diesel exhaust along with general wear and tear sustained during the war-time use. One symmetrical hole in the blue field of the flag appears to have come from a German machine-gun bullet. Additional moth damage and other fading and discoloration occurred after the war.

The flag joins other historic objects in the “D-Day, June 6, 1944” display: a Latin cross grave marker and one of two existing grappling hooks used by Army Rangers at Pointe du Hoc, Normandy. The story of the initial invasion landings of the Battle of Normandy is further documented through items representing the two American invasion beaches, including identification tags, photographs, a canteen and spent .50-caliber machine-gun casings recovered from Utah Beach (one of the five landing sites of the Allied invasion). The display is on view at the landmark entrance to the museum’s “Price of Freedom: Americans at War” exhibition.

On June 6, 1944, Operation Overlord began with a naval invasion of Normandy, code-named Neptune. The invasion commenced the overall Battle of Normandy, making Neptune the most well-known “D-Day” of its kind. In military use, “D-Day” is an expression from U.S. Army terminology where “D” generally refers to the first day of an operation or attack; it serves as a place holder in the planning phase. The invasion was one of the largest seaborne assaults in human history and ultimately liberated Western Europe from Nazi control. By 1941, officials determined that the only option for defeating Nazi Germany was to invade the Western European continent, so planning commenced for an Allied invasion of France. American, Canadian and British forces landed at five beaches code-named Utah, Omaha, Gold, Juno and Sword. For many of the American soldiers involved, the landings at Utah and Omaha would be their first introduction to combat.

LCC 60 was the secondary control vessel for the “Tare Green” sector and never came ashore. When the two control vessels of the adjacent “Uncle Red” sector were knocked out of action, LCC 60 was pressed into primary service. She led the initial waves of landing craft tanks (LCTs) and landing craft, vehicle, personnel (LCVPs) to the line of departure position for the “Uncle Red” sector while concurrently managing her secondary assignments for “Tare Green.” Strong tidal currents, wind and the fog of war caused crafts directed by LCC 60 at “Uncle Red” to land approximately 1,000 to 1,500 yards away from the pre-invasion designated landing zones, but the new site ultimately proved to be a stroke of providence. With fewer obstacles and defenders, the casualties at Utah Beach numbered less than 200 for the entire day.