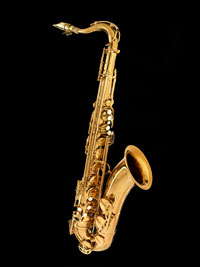 The Smithsonian’s National Museum of American History will kick off the 13th annual Jazz Appreciation Month March 26 at 11 a.m., with donations from Ravi Coltrane, son of international music legends, John and Alice Coltrane, and from notable jazz photographer, Chuck Stewart. Coltrane will then discuss his father’s career and the famed studio album, A Love Supreme, widely considered one of the greatest jazz albums of all time and celebrating its 50th anniversary. During its own 50th anniversary year, the museum is displaying Coltrane’s original score in the “American Stories” exhibition through June 17. The ceremony will be webcast live online.

Ravi Coltrane will donate his father’s Selmer Mark VI tenor saxophone, made in Paris about 1965, the year that A Love Supreme was released. The saxophone is one of three principal saxophones Coltrane played and will be on view in the “American Stories” exhibition starting June 17. An accomplished bandleader and composer in his own right, Ravi Coltrane tours extensively with his own groups and with many other artists, including jazz musicians. He is a Blue Note recording artist.

“Today, a cherished and beloved Coltrane family heirloom becomes a national treasure and through Stewart’s never before seen images, our view of Coltrane expands,” said John Gray, director of the museum. “These generous donations help us preserve not only the legacy of individual artists, but of jazz music as a whole and its integral role in the history of music in America.”

Stewart, best known for his photographic depictions of jazz culture and popular jazz artists such as Ella Fitzgerald, Miles Davis and Louis Armstrong, will donate rare photographs from the A Love Supreme recording session. These images come from long-forgotten, recently discovered negatives of photographs that were never or rarely used despite being taken in 1964.

John Coltrane (1926–1967) and his quartet recorded his masterpiece, A Love Supreme,
Dec. 9, 1964. The album is a four-part suite, broken up into tracks: “Acknowledgement” (which contains the mantra that gave the suite its name), “Resolution,” “Pursuance” and “Psalm.” The composition melds the hard bop sensibilities of his early career with the free jazz style he later adopted.

This year’s JAM 2014 programs include free talks, workshops and performances. As part of its educational mission, more than 150,000 posters featuring John Coltrane by artist Joseph Holston have been distributed to schools, organizations and government agencies in the U.S. and abroad. A full schedule of events at the Smithsonian and links to resources are available online at http://smithsonianjazz.org.

The museum launched JAM in 2001 as an annual event that pays tribute to jazz both as a historic and living American art form. It has grown to include celebrations in 50 states and 40 countries. The lead sponsor for JAM 2014 is the Argus Fund. Support is also provided by the Ella Fitzgerald Charitable Foundation, which helped establish the first JAM endowment fund, and the Smithsonian Women’s Committee. In celebrating JAM, the museum joins with a diverse group of organizations, corporations, associations and federal agencies that have provided financial and in-kind support, as well as organizing programs and outreach of their own.

The National Museum of American History is home to jazz collections that include 100,000 pages of Duke Ellington’s unpublished music. A number of jazz treasures, including Gillespie’s trumpet, Tony Bennett’s oil painting of Fitzgerald and Herbie Hancock’s cordless keyboard are on display. The 17-member Smithsonian Jazz Masterworks Orchestra, led by conductor and artistic director Charlie Young, serves as the orchestra-in-residence at the museum. The SJMO is on a national tour this spring. More information about the SJMO is available at www.sjmo.org.