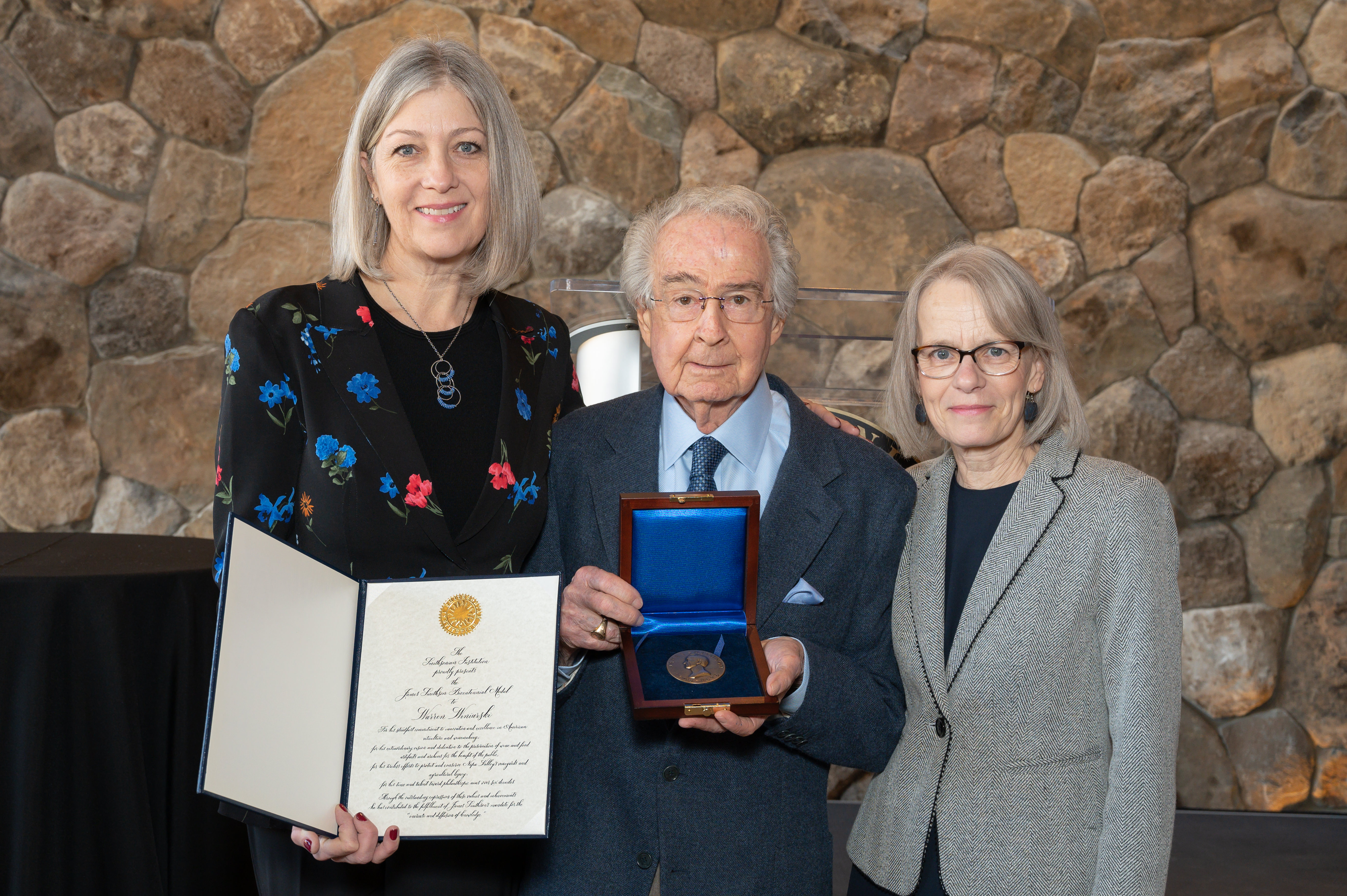 The Smithsonian’s National Museum of American History will award famed winemaker, mentor and preservationist Warren Winiarski of Napa, California, the James Smithson Bicentennial Medal in recognition of his contributions to American winemaking and the museum’s American Food & Wine History Project. Anthea M. Hartig, the Elizabeth MacMillan Director of the museum, represented the Smithsonian today, Nov. 21, at a ceremony at Stag’s Leap Wine Cellars in Napa.

Winiarski (which means “from wine” or “from a winemaker” in Polish) was born in 1928 in Chicago and graduated from St. John’s College in Maryland in 1952. During his time as a University of Chicago graduate student, Winiarski spent a year in Italy studying Niccolo Machiavelli manuscripts. While there he enjoyed wine as a daily mealtime beverage and discovered his interest in winemaking. He moved with his family to the Napa Valley in 1964 and later bought a 50-acre prune orchard in 1970 that would become part of Stag’s Leap Wine Cellars.

Winiarski helped raise the profile of American viticulture and winemaking when his 1973 Cabernet Sauvignon placed first among red wines in the 1976 Judgment of Paris wine tasting. Since then, Winiarski has mentored generations of top winemakers and helped ensure the future of vineyards in the Napa Valley through land-preservation efforts.

“About a quarter century ago, Warren sparked the inspiration for the museum’s food history project and ever since has generously supported this path-breaking work,” Hartig said. “We are deeply grateful that he has allowed the museum to share the captivating stories of American culinary and winemaking history in its full breadth, depth and diversity.”

“I am greatly honored to receive this medal,” Winiarski said. “And I want to share its honor with those who over time have sought to elevate wine as food for the spirit. Also, I want to thank the museum and its dedicated and creative staff with whom I have had a long partnership. It has been such a pleasure bringing wine and food together with them over many years.”

During a career spanning 53 years, Winiarski has shown incredible dedication to preserving the history and cultural landscapes of wine making. The Paris Tasting vineyard at Stag’s Leap Wine Cellars was the first agricultural land placed under conservation easement in Napa County to ensure its agricultural use in perpetuity. Winiarski also supported the efforts of the University of California at Davis library to collect the papers of world-renowned wine authors. In 2017, he was inducted into the California Hall of Fame for his outstanding contributions to “the spirit of California.”

Winiarski has been a supporter of the National Museum of American History for nearly 25 years, helping to establish the museum’s American Food and Wine History Project in 1996 and contributing the lead gift toward “FOOD: Transforming the American Table 1950–2000” exhibition in 2012. He donated a bottle of his award-winning 1973 Cabernet Sauvignon to the museum’s collections, currently on view in the “FOOD” exhibition and featured as part of Smithsonian magazine’s November 2013 issue “101 Objects that Made America.”

The James Smithson Bicentennial Medal, established in 1965, is given under the Secretary’s authority to persons who have made distinguished contributions to the advancement of areas of interest to the Smithsonian. Winiarski will be the 71st recipient since 1990 and the first winemaker so honored. The medal recognizes his dedication to the American values of entrepreneurship, innovation and freedom.

Through incomparable collections, rigorous research and dynamic public outreach, the National Museum of American History explores the infinite richness and complexity of American history. It helps people understand the past in order to make sense of the present and shape a more informed future.