From Resistance to Rebellion

For years the colonies had flourished in a state of “salutary neglect.” Britain had been content to leave the day-to-day administration of local government to its royal governors and to the colonies’ own English-style representative legislatures, common-law jury courts, and local militias. Following its victory in the French and Indian War, Britain looked anew at its imperial responsibilities. Parliament decided to secure its expanded American empire with British troops. English commoners paid taxes to support Britain’s powerful army and navy and finance its war debt; it seemed fair that colonists should pay too.

Colonists bristled when the British government began to enact and execute taxes and other binding laws without deference to colonial governments or popular consent. Colonial resentment gradually turned to open resistance. Colonists issued statements of their rights, appealed to the king and people of Britain, and petitioned Parliament. They boycotted British goods and harassed royal officials. Some protests turned violent.

Differing economic interests, regional and ethnic identities, and religious beliefs divided the colonists. But as they began to communicate and coordinate insurgencies, they came to realize that they shared a common understanding of their rights and liberties. 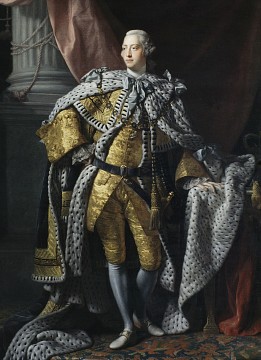 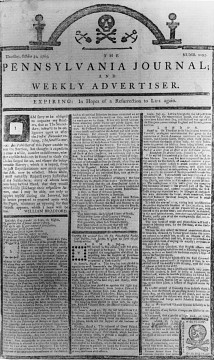 Pennsylvania Journal and Weekly Advertiser, 1765, which suspended publication with this issue to protest the Stamp Act which imposed a tax on legal documents, playing cards, and newspapers, requiring that each item be marked with a royal emblem, or stamp. 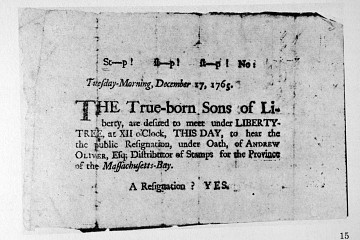 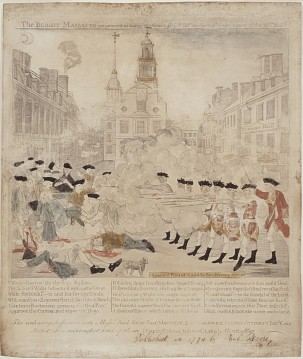 The Boston Massacre. On March 5, 1770, British soldiers fired into a crowd that had been pelting them with insults and snowballs. Five colonists were killed. Paul Revere’s portrayal of the event—with a line of soldiers firing when an officer gave the order—was intentionally inaccurate, designed to arouse public outrage. Popular leaders pointed to the “massacre” as evidence that a standing army threatened American liberty—and American lives. 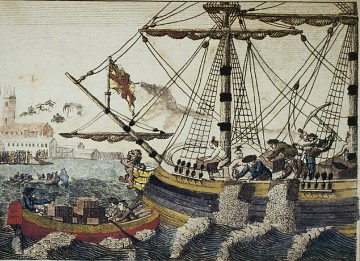 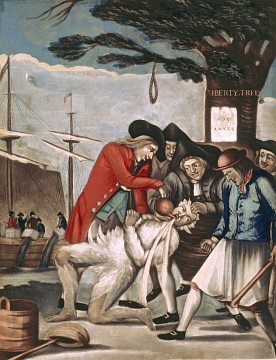 British cartoon depicting the fate of Boston customs officer John Malcomb, who was tarred and feathered and forced to drink tea, 1774 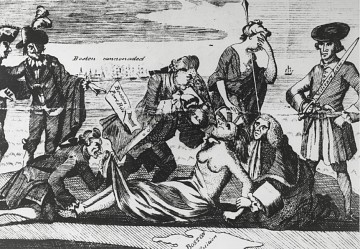 In this British cartoon, Prime Minister Lord North wields a teapot and forces a figure representing America to swallow a “bitter draught”—the laws and taxes that Parliament imposed on the colonies.
‹ Colonel George Washington up A War Begins ›