On April 19, 1775, British troops in Boston marched in darkness toward nearby Concord to seize the local militia’s cache of arms and gunpowder. Patriots from Boston alerted the countryside. At dawn, the British confronted a militia unit gathered on the green in Lexington. During the standoff, a shot was fired. In a brief melee, eight colonists were killed and ten wounded.

From Lexington, British troops marched to Concord, where they destroyed the few supplies the militia had not hidden. After a fierce skirmish with militia, they started back to Boston. Hundreds of militiamen joined the counterattack, forcing the British to make a desperate retreat.

Exhausted and panicked British soldiers lashed out, killing civilians, ransacking and looting houses, and setting fires—three houses near Lexington burned to the ground. “Our all is at stake,” declared a call to arms issued the next day; the British were going “to ravage this devoted country with fire and sword.” Some colonists recoiled from the notion of taking up arms. Other joined the fight resolved to save themselves and their children from lives of “perpetual slavery” under British rule. The war for independence had begun. 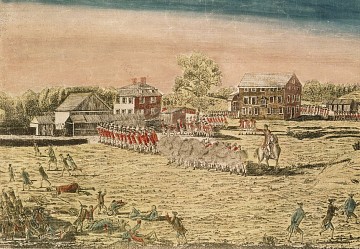 The Battle of Lexington by Amos Doolittle, 1775 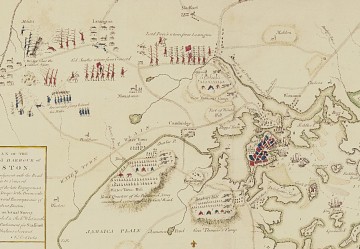 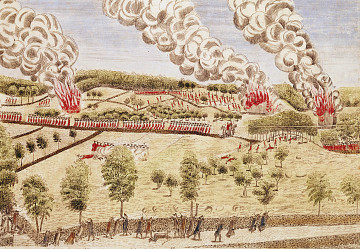 Broadside, 1775. By day’s end, 50 colonists were dead; 39 were wounded. British troops reached Boston with 73 dead and 174 wounded. “Whoever looks upon them as an irregular mob will find himself much mistaken,” wrote a British commander about the colonists; “they have men amongst them who know very well what they are about.”

« prev next »
‹ From Resistance to Rebellion up Continental Forces ›