Peace was won, but an uncertain future lay ahead. Although the American economy was booming and the nation’s spirits were high, eight years of war had left cities worldwide in ruin, economies in shambles, and civilian populations displaced and ripe for unrest. The United States championed the establishment of the United Nations (chartered in June, 1945), daring to hope that it would keep world peace and safeguard U.S. economic and political interests worldwide.

Even as tensions with the Soviet Union surfaced, American forces were rapidly demobilized and millions of GIs returned home. Veterans sought a return to normal life. The GI Bill made it possible for all returning veterans to achieve the American dream of owning a home of their own. Educational subsidies and job-finding aid helped many veterans increase their earning and spending power. And more than four million no-down-payment, low-interest mortgages helped them finance the purchase of a new house (costing about $8,000). The GI Bill fueled an unprecedented growth of America’s middle class and contributed to the phenomenal spread of suburbs nationwide. 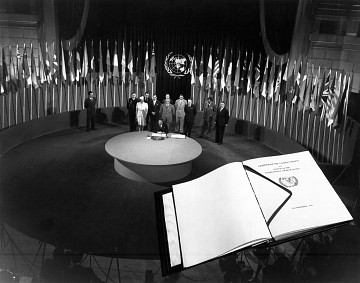 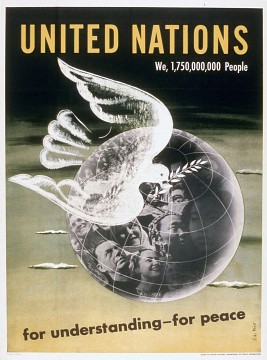 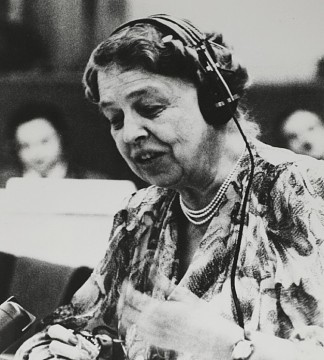 Eleanor Roosevelt at the United Nations, 1947
‹ Victory and Peace up Korean War ›