Puppets on Radio, Film, and Television

Beginning in the 1930s, new media provided wider audiences for America’s most well-known puppeteers and puppets. New techniques were developed to match the immediacy afforded by the microphone and camera. Edgar Bergen and his puppet Charlie McCarthy entered American homes via radio broadcasts. George Pal pioneered a groundbreaking system of stopmotion puppetry on film. Jim Henson’s techniques grew out of his fascination with the technology of television; he achieved intimacy by freeing his characters from the confines of the traditional puppet stage and animating them through his experiments with the focus of the TV camera and TV monitor.
VENTRILOQUIST PUPPETS
Ventriloquist puppets can take a number of forms, such as a hand puppet or a stuffed creature; the type we know best is a large doll. All have a “conversation” with the puppeteer, achieved by the latter’s ability to alter his speech, making it appear to come from the mouth of the puppet. This is the art of “throwing one’s voice.” 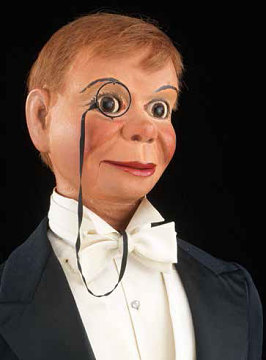 Edgar Bergen and his wooden alter ego Charlie McCarthy, created in 1922, achieved wild popularity through their radio appearances. Fashioned as a newsboy, McCarthy changed to a bon vivant, inspired by Esky, the cartoon symbol of Esquire magazine. Bergen played straight man to McCarthy’s antics. Superbly marketed through commercial products, McCarthy and Bergen were popular with audiences of all ages.

Gift of the Bergen Foundation 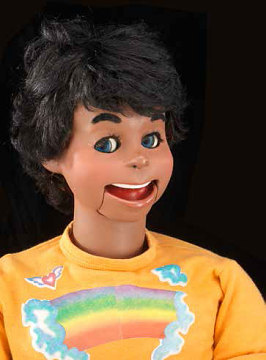 Bob Campbell was created by puppeteer-actor Jay Johnson for the TV comedy series Soap, a lampoon of soap opera narratives. The puppet acted as the half-brother of cast members Johnson and Billy Crystal, and was used often as Johnson’s uninhibited alter ego, spouting outrageous observations about various situations and characters. Highly controversial for its time, Soap dealt openly with topics such as race, religion, sexuality, and organized crime.

MARIONETTES
Marionettes are manipulated from above the stage using wires or strings usually attached to a horizontal control bar, often called an airplane control because of its shape. A usually unseen puppeteer operates the bar. The French term dates from around 1600 and translates as “little Mary,” in recognition of the Virgin Mary, one of the first figures used as a stringed puppet in church morality plays. 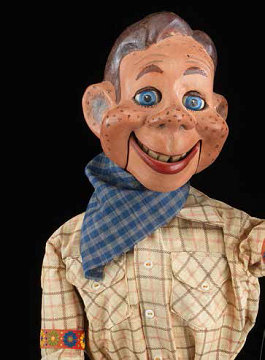 From 1947 to 1960, The Howdy Doody Show was the leading children’s TV program. The creator of Howdy Doody, “Buffalo” Bob Smith, first performed him as a radio voice; Frank Paris transformed the voice into a TV puppet. In 1948, Paris left the show in a dispute about merchandising rights.  Velma Dawson created a new Howdy Doody. Rufus and Margo Rose built this marionette with parts from the Dawson puppet.

Bil Baird created this marionette for the television special “Art Carney Meets the Sorcerer’s Apprentice,” about an illusionist whose magic always backfires. The puppet is in the image of actor Art Carney, who rose to fame as an original cast member of the television situation comedy The Honeymooners. Baird is famous for devising the puppets featured in “The Lonely Goatherd” sequence in the 1965 film The Sound of Music.

FINGER PUPPETS
Animated simply by wiggling, a finger puppet is a sheath of cloth, paper, or rubber that fits over a single finger. It normally has no moving parts such as arms or legs. This form is generally used for toys. 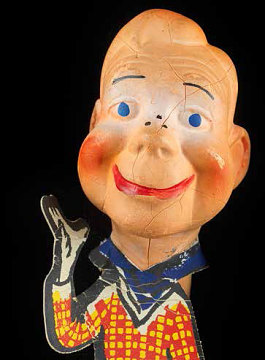 These finger puppet toys for children depict three cast members of the wildly popular children’s television series The Howdy Doody Show. Two are based on marionette figures seen on the show: cowboy Howdy Doody and Phineas T. Bluster, the cantankerous mayor of Doodyville. They are joined by a miniature version of the human character Clarabell the Clown. They illustrate one of the many ways the show was aggressively marketed to youngsters.

STOP-MOTION PUPPETS
Stop-motion puppets are three-dimensional figures made of either carved wood and plastic or a clay substance molded on a wire shape. The puppeteer poses and re-poses the puppets in progressive phases of movement and documents each movement on a single frame of film. The film is then projected at the correct speed, creating the illusion of animation. 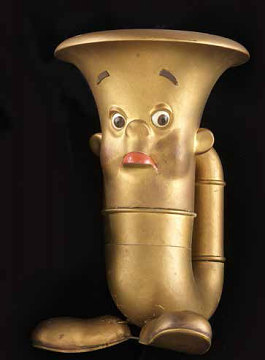 Of George Pal’s nearly fifty Puppetoon film shorts, one of the most famous is the 1947 Tubby the Tuba, a fantasy about the instruments in a symphony orchestra. This Tubby the Tuba puppet is paired with a wise frog that counsels Tubby. They are surrounded by a trio of miniature stringed instruments. 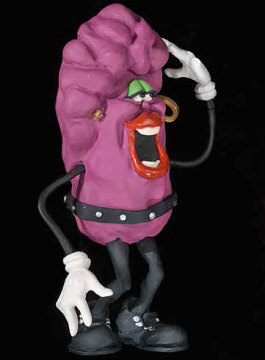 The California Raisins are sculpted clay figures used as advertising and merchandising characters by the California Raisin Advisory Board. Developed by Will Vinton Productions and based on caricatures of African American rhythm-and-blues groups, they are often accompanied by a soundtrack of “I Heard It through the Grapevine,” originally popularized by soul and rhythm-and-blues singer Marvin Gaye.

Gift of Will Vinton 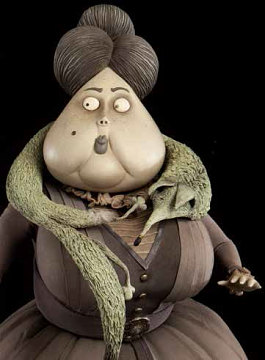 The use of stop-motion puppets in films is given a glorious turn in producer-director Tim Burton’s 2005 Corpse Bride, a gently macabre Victorian fairy tale. Graham G. Maiden and the British firm Mackinnon and Saunders transformed Burton’s vision into intricate puppets made of metal, silicone, and fabric. The supporting characters shown here are a male and female zombie, Widow Munch, and Green Grocer. 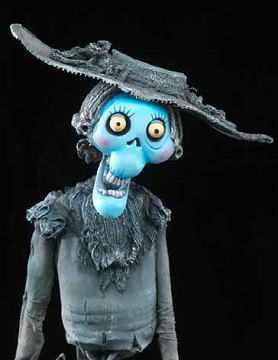 HAND PUPPETS
Usually made of cloth, a hand puppet is a flexible, glove-like structure. The puppeteer inserts a hand and manipulates the figure by moving fingers and wrist. This method can be traced to prehistoric times, when storytellers used their hands to make shadows to illustrate their tales. It evolved evolved into the use of highly sophisticated objects of wood, plastic, paint, and fabric. 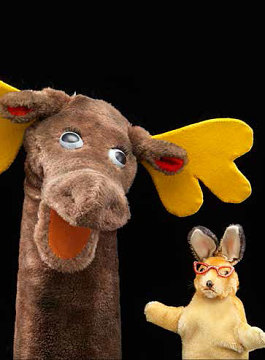 The mischievous Bunny Rabbit and goofy Mr. Moose were created by puppeteer Cosmo Allegretti for the children’s TV series Captain Kangaroo (1955-84). Bob Keeshan created the show and starred as the title character. The Captain engaged the puppets in conversations aimed at teaching moral lessons to young viewers. The talks were staged with the Captain standing in front of a large rectangular counter and puppeteer Allegretti crouching behind it to operate the puppets. 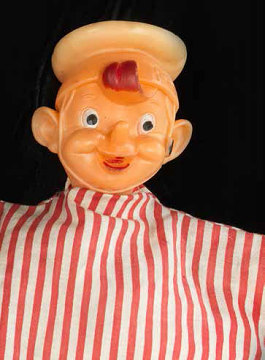 These elves, official mascots created for a Kellogg’s Rice Krispies advertising campaign, are based on drawings by illustrator Vernon Grant and cartoonist Don Margolis. The characters are named for the percussive sounds made when the puffed-rice cereal is splashed by milk. Originally the puppets were offered to consumers as premiums for collected cereal box tops mailed in to the manufacturer.

MUPPETS
The Muppet characters grew from the creativity and imagination of Jim Henson, who was involved in puppetry since his high school years.  Introduced in the 1950s on various television programs, the Muppets are known for their zany, absurdist humor and outlandish, distinctive looks.  Henson coined the term "muppet" simply because he liked the sound of the word. 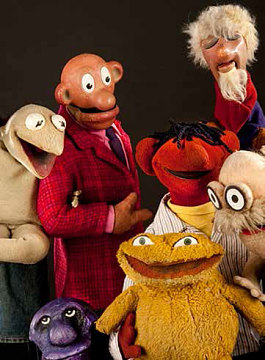 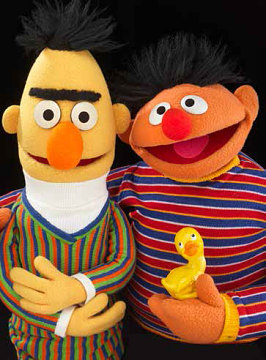 For the public television children’s series Sesame Street, Jim Henson created a virtual neighborhood made up of his zany Muppets. Most were hand-rod puppets used to provide life lessons: for example, the inseparable duo Bert and Ernie show the values of friendship, and Oscar the Grouch’s irascible behavior and love for trash demonstrate the effects of antisocial behavior. 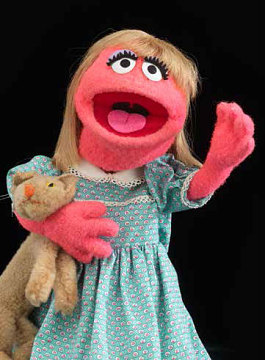 Sweet-faced Prairie Dawn is a hand-rod puppet created by Jim Henson for the innovative children’s educational television series Sesame Street. She is a precocious, piano-playing seven-year-old who loves to write and direct school pageants featuring her Muppet friends. The antics of Prairie Dawn and other Muppet figures are key to the enduring popularity of Sesame Street. 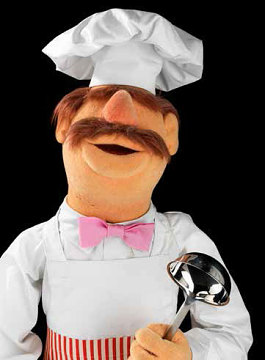 The Muppet Show, a vaudeville-style Jim Henson television series, featured a cast of wacky Muppets and human guest stars. The Swedish Chef, a parody of TV cooking show hosts, speaks in a comically incomprehensible dialect.  The bespectacled Scooter is a stagehand at the Muppet Theater and nephew of the theater’s owner. 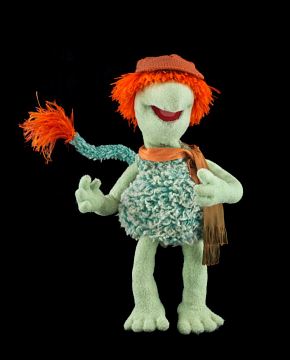 The children’s TV series Fraggle Rock featured a group of Muppet characters known as Fraggles. Although comically high-spirited, the series was an allegory of the human world, exploring such complex issues as social conflict, personal identity, and environment.  Red Fraggle’s optimism, athleticism, and boundless energy annoy the dour Boober Fraggle, who dislikes frivolity.

‹ Puppets on Stage up Puppetry in America ›