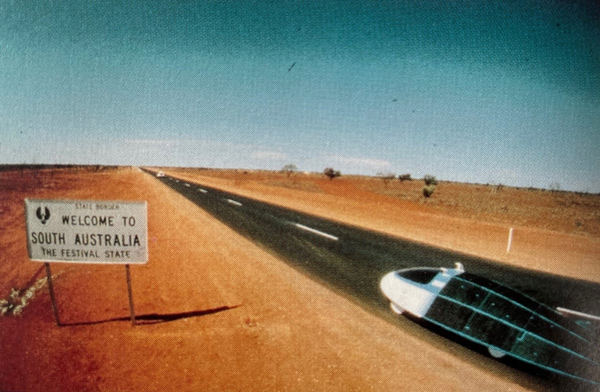 Powered solely by sunlight, the GM Sunraycer won the inaugural World Solar Challenge in a race across Australia in November 1987. A team of six drivers took turns in the vehicle during the race, one driver at a time. They covered a 1,950-mile route over 5 1/4 days in a combined daytime running time of 44 hours at an average speed of 41 miles per hour.

General Motors, several GM subsidiaries, and an AeroVironment engineering team led by Paul MacCready designed the Sunraycer to compete in the Challenge. The team combined lightweight materials, solar power technology, and cutting-edge power management systems to create an energy-efficient speedster. The car’s development tested the possibilities of fossil-free energy for transportation and laid the technological foundations for other solar-powered cars and modern hybrid gasoline-electric cars. 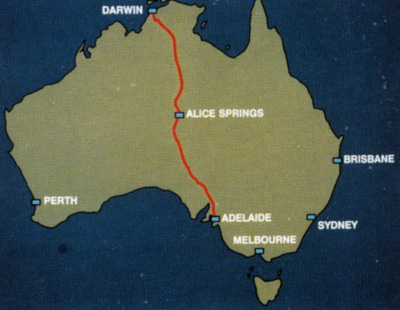 Adventurer Hans Tholstrup, who with Larry Perkins made the first trip across Australia in a solar-powered vehicle in 1982, invited others to explore the limits of solar-powered driving in a cross-country race sponsored by the South Australian Tourism Commission. Race contestants traversed the Australian continent from north to south, beginning in Darwin and ending in Adelaide. The race took place on public roads, with most of the route along the Stuart Highway. During the competition, drivers had to obey all traffic laws.

Racing took place between the hours of 8:00 am and 5:00 pm, with two hours of battery charging time (using sunlight only) permitted before and after racing. While charging, teams oriented their cars or their removable solar arrays perpendicular to the sun for optimal charging. The battery stored supplemental power to be used during periods of low light level, when accelerating to pass other vehicles, speeding out of shadows, and climbing hills. 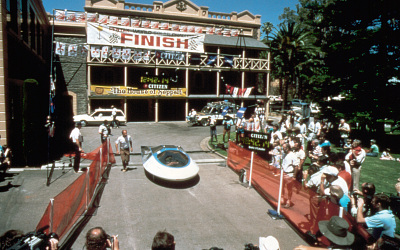 An observation vehicle accompanied each car and monitored the performance and condition of its electrical components. Support crews constantly monitored weather conditions and forecasts to adapt racing strategies for maximum efficiency. Winning the race required an optimal balance of energy production, storage, and consumption. Ford’s Sunchaser finished second, 2 1/2 days and more than 620 miles behind Sunraycer. Only 13 of the 24 entrants completed the route. 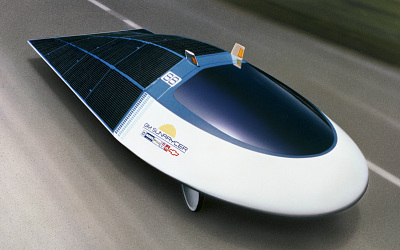 Two fins on top of Sunraycer helped the vehicle deal with strong crosswinds and powerful vortexes created by the wakes of gigantic trucks known as road trains. A road train carried three or more trailers, could be longer than a Boeing 747, and could weigh 100 tons or more. Its wind wake could blow a lightweight solar racer off the road. Sunraycer’s fins worked in conjunction with its wheels, acting as flow straighteners to balance airflow on top and underneath the body and increase safe operating speeds. The fins also met the race’s three-meter minimum height requirement and provided a convenient place for turn signals. The right fin is outfitted with a fiber optic remote viewing system connected to a small video screen inside the cockpit. This system replaced external rear view mirrors, which would have created drag.

Sunraycer’s body contours and the shape of its surface solar arrays emerged from a series of wind tunnel tests, computer simulations, and field tests. After testing a wide variety of shapes, the team decided on a streamlined design that minimized aerodynamic drag and vulnerability to crosswinds. Initial testing eliminated body designs with separate solar arrays or tilted panels; sacrificing solar power for reduced air resistance, the team chose to attach solar cells directly to the car’s body to minimize aerodynamic drag. At the time, this design recorded the lowest drag coefficient ever tested in the wind tunnel at the California Institute of Technology. 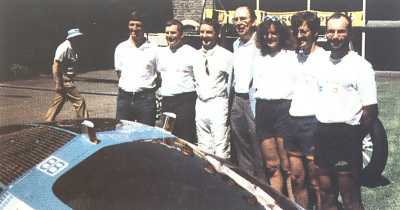 The cockpit housed the driver’s hammock-style seat, vehicle controls, and an instrument panel that displayed the performance and condition of all electrical components. A 90-channel telemetry system transmitted data displayed on the instrument panel to the observation vehicle for analysis. The Plexiglass windscreen, coated on the inside with a thin film of gold plating to protect the driver from the intense outback sun, blocked 98 percent of ultraviolet and 90 percent of visible radiation. A combination of shielding and ventilation kept the driver comfortable in outdoor temperatures exceeding 100 degrees. 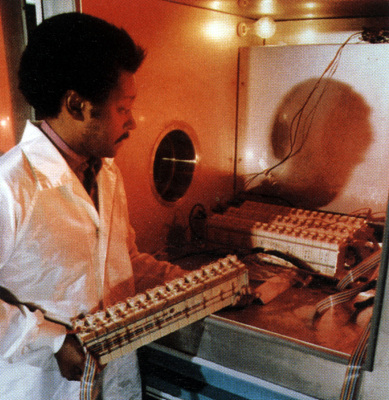 The batteries that powered the Sunraycer. "The GM Sunraycer Story" brochure.

The Sunraycer’s peak-power tracker became its key to efficiency. This device continuously adjusted the voltage of each solar array to maximize power extraction while delivering power to the motor or battery with 98.5 percent efficiency. Each of the 12 arrays had its own dedicated peak-power tracker. The arrays could generate 1,550 watts in steady sunlight conditions. Direct current electricity, produced in the solar arrays and converted into three-phase alternating current by a motor drive inverter, powered Sunraycer’s motor. It could operate at efficiencies exceeding 97 percent and could deliver four horsepower continuously or ten horsepower for short periods. A cogged belt delivered the motor’s power to the left rear wheel. 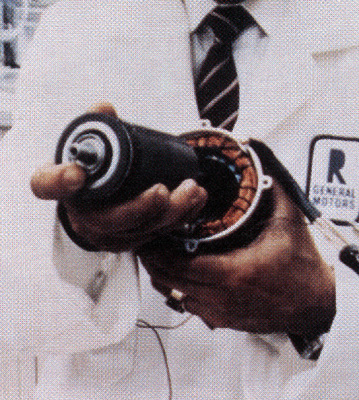 Motor that powered the Sunraycer. "The GM Sunraycer Story" brochure.

The solar arrays also produced direct current electricity to charge the battery. Sunraycer’s 68-cell silver-zinc battery weighed 60 pounds and had a storage capacity of three kilowatt-hours, equivalent to a lead-acid battery four times its weight. A regenerative braking system provided an additional charge to the battery by capturing kinetic energy involved with braking and converting it to electricity.

Before donating the GM Sunraycer to the National Museum of American History, General Motors sent the cutting-edge vehicle on a national tour of auto shows, museums, and schools to promote interest among students in alternative energy technology and engineering careers. GM also developed an educational initiative around Sunraycer aimed at promoting careers in science and engineering. 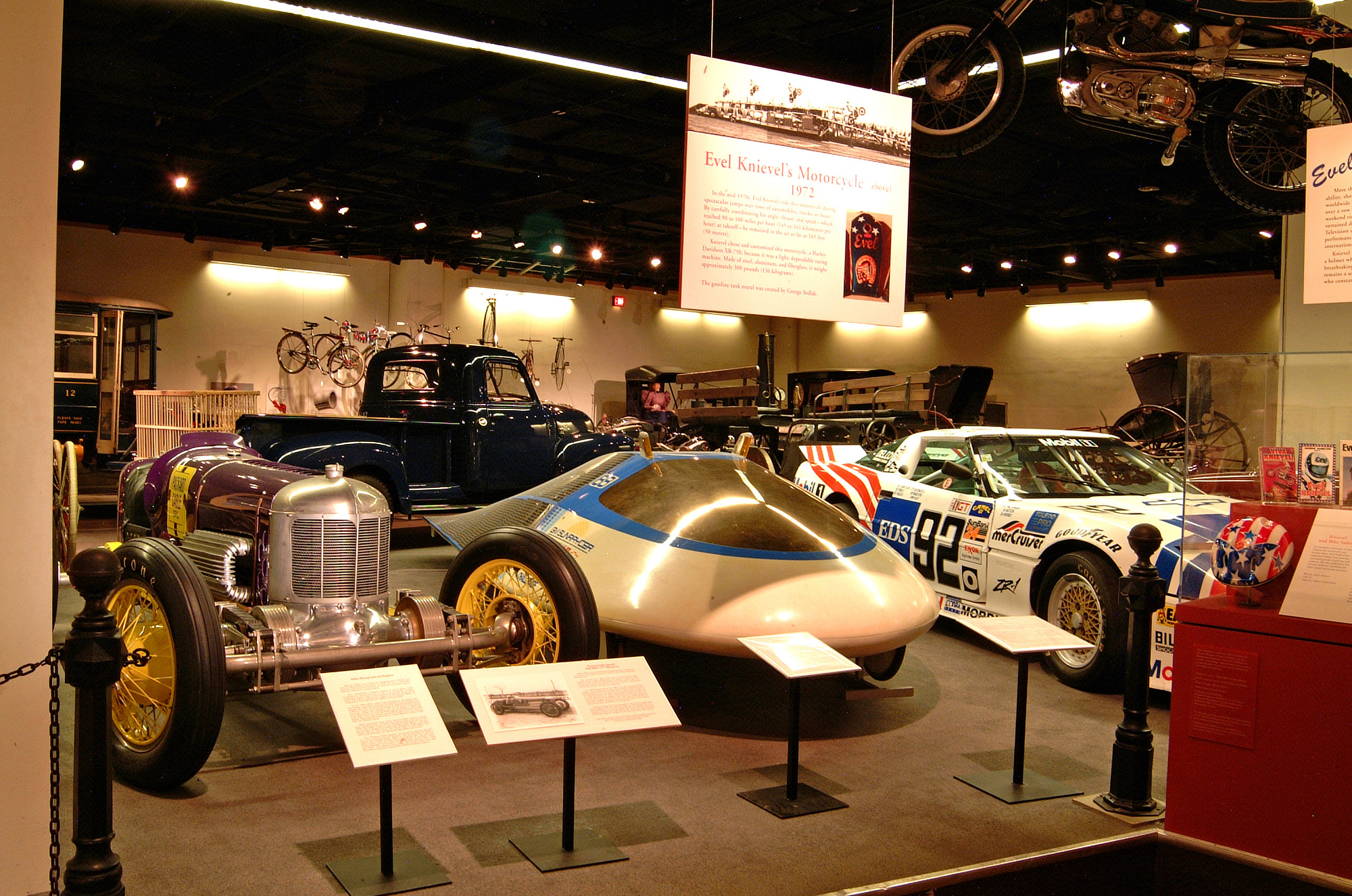 In collaboration with the Society of Automotive Engineers and the U.S. Department of Energy, GM organized America’s first solar vehicle race in July 1990. The event, named GM Sunrayce USA, emulated the World Solar Challenge with an 1,800-mile road race that began at GM’s World of Motion at Walt Disney World in Florida and ended at GM headquarters in Detroit. Race teams from 32 colleges and universities across North America designed, built, and drove their vehicles. General Motors provided support for the top three finishers to enter the second World Solar Challenge, held in Australia in November 1990.

Solar vehicles did not enter widespread use, but the GM Sunraycer laid the theoretical and practical foundations that made modern electric and hybrid gasoline-electric vehicles feasible for everyday transportation. GM and AeroVironment developed the GM Impact battery-powered electric car, introduced in 1990 and later consumer tested. Their experience with Sunraycer provided insights into driver activity, power consumption, battery life, driving range, and design of the instrument panel display in a battery-electric car.

The Impact became the prototype for the EV1, GM's first battery-electric production car. AeroVironment applied the research and development discoveries gained from Sunraycer, the Impact, and the EV1 to other technologies, including rapid battery charging systems and power processing systems used to test and develop electric vehicles, hybrid gasoline-electric vehicles, and batteries.