At the crossroads of the young United States, the mid-Atlantic region became the site of ongoing struggles for two kinds of liberty: freedom of worship and abolition of slavery. Jews made a home in New York despite the colonial government’s reluctance to host them. Catholics attempted to establish Maryland as their only safe haven in English North America. Formerly enslaved men and women founded churches of their own in Pennsylvania, which had long served as a refuge for those wanting to practice religion as they pleased. 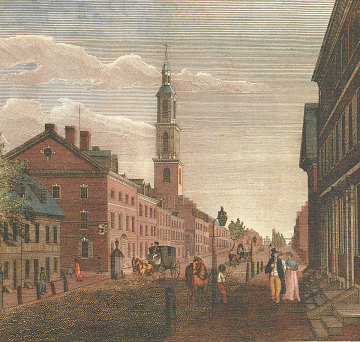 From The City of Philadelphia... as it appeared in the Year 1800

Religion and the Arts

Skills like embroidery mastered by girls as young as ten also served to display religious knowledge. This sampler, stitched in New Jersey in 1788 by fourteen-year-old Rachel Kester, demonstrated talent with the needle through an inscription beginning with the words “Love the Lord and he will be a tender father.” 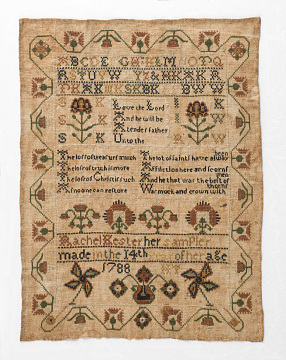 For many in early America, religion was particularly significant at the beginning and the end of life. Mourning jewelry like this 18th century pendant was worn by mothers to commemorate the death of children, while German immigrants in Pennsylvania crafted elaborate fraktur birth and baptismal certificates to mark more joyous occasions. 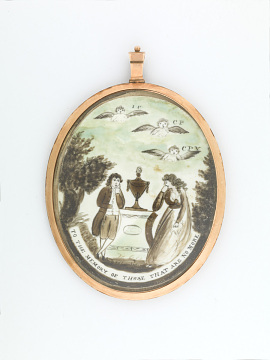 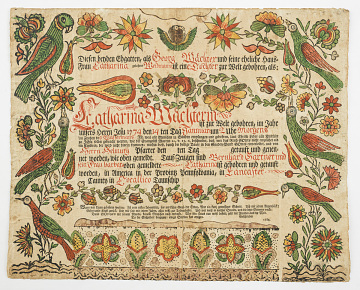 Edward Hicks (1780–1849) was a Society of Friends minister and folk artist whose paintings Quakers came to see as statements of religious sensibilities and ideals. Quakers emphasized pacifism, missionary work, and friendly relations with Native Americans, as seen in the background of this painting. 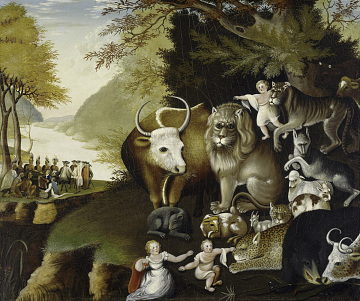 On the Christian Sabbath, many children were allowed to amuse themselves only with “Sunday toys,” simple playthings that taught biblical or moral lessons. This is among the earliest surviving examples of Noah’s Ark playsets, fashioned in England in the 1820s and later brought to America. 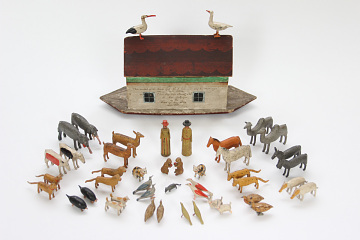 Loan from the Collection of Judy and Jim Konnerth 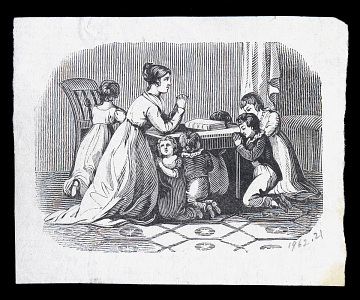 As the only Catholic-founded colony in English North America, Maryland was a vanguard in the struggle for religious tolerance. Pennsylvania and New York likewise became safe havens for minority religions, as well as the rights of African Americans fighting for their freedom. 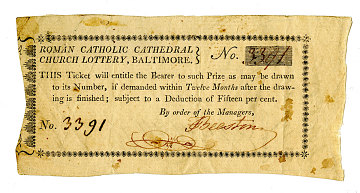 America’s first Roman Catholic Cathedral, the Baltimore Basilica, was designed by Benjamin Latrobe, the Architect of the U.S. Capitol appointed by Thomas Jefferson. The basilica was constructed between 1806 and 1821 with funds raised in part through the sale of lottery tickets. 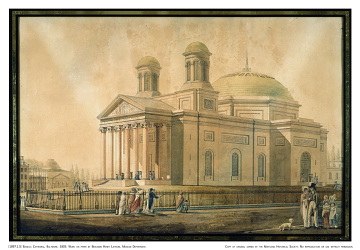 Archbishop John Carroll (1735–1815) was the first Roman Catholic bishop in the United States, and the founder of Georgetown University. At a time of rampant anti-Catholic sentiment, priests often traveled with a “saddle chalice,” a communion cup that could be dismantled and hung on a saddle, disguised as a bell. 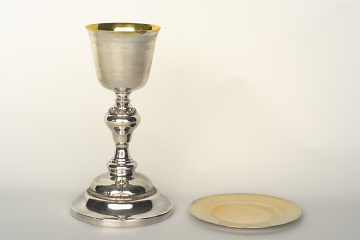 Loan from Basilica of the National Shrine of the Assumption of the Blessed Virgin Mary, Baltimore, Maryland 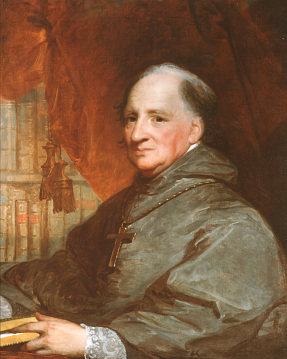 Facing widespread suspicion, Catholics often worshipped in private. This tabernacle held the ritual elements of the Eucharist at the earliest Jesuit chapel in Maryland. It was later kept in the home of Charles Carroll of Carrollton (1737–1832), Archbishop John Carroll’s cousin and the only Catholic signer of the Declaration of Independence. 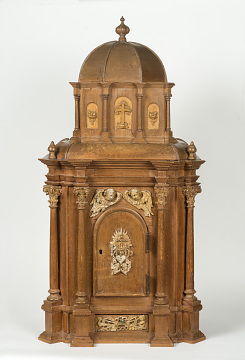 Loan from Basilica of the National Shrine of the Assumption of the Blessed Virgin Mary, Baltimore, Maryland

Haitian immigrant Elizabeth Lange (1784–1882) established the first Catholic order for women of African descent in America, as well as a school for African American girls in Baltimore, where student Mary Pets stitched this sampler in 1831. These crosses worn by Mother Lange remain sealed in their case while she is being considered for sainthood. 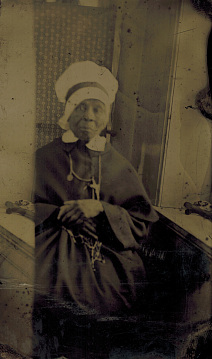 Courtesy of the Oblate Sisters of Providence Archives 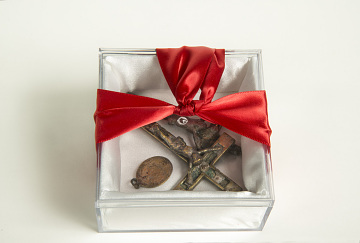 Loan from the Oblate Sisters of Providence Archives

Used in Catholic liturgies at the earliest Jesuit missions in English North America, this cross is said to be made from iron taken from the Ark and the Dove, on which the first English Catholics arrived in Maryland in 1634. It is still in use today at Georgetown University. 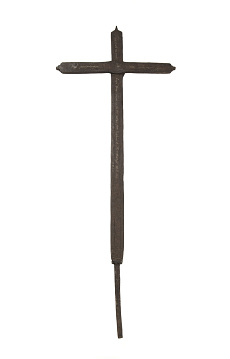 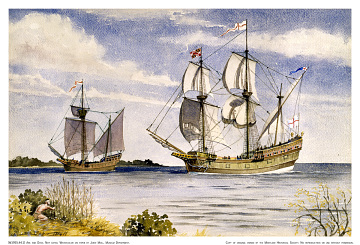 Joseph Smith (1805–1844) founded The Church of Jesus Christ of Latter-day Saints in 1830 after publishing a new scripture he called the Book of Mormon. According to tradition, an angel led Smith to a hilltop in New York where he discovered golden plates inscribed in an ancient language. He dictated a translation to a scribe who wrote the manuscript page here. The first edition of the Book of Mormon appeared soon after; since then, more than 150 million copies have been published, making it among the most printed books of all time. 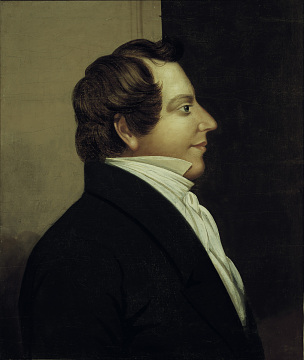 Courtesy of The Church of Jesus Christ of Latter-day Saints

Loan from Church History Library, The Church of Jesus Christ of Latter-day Saints

Though their movement began in New York, the Mormons soon relocated to Ohio and Missouri before moving farther west. In frequent conflict with the federal government, they established their own currency and proposed creating a new state beyond existing U.S. borders, in the area now including Utah, Nevada, and New Mexico.

Loan from The Church of Jesus Christ of Latter-day Saints 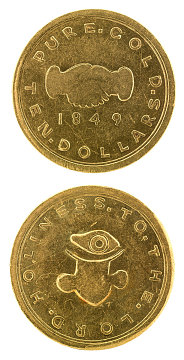 Gift of Estate of Josiah K. Lilly Jr. and Transfer from U.S. Department of the Treasury, U.S. Mint

Freeborn Garrettson (1752–1827) was a major figure in early American Methodism. A former slave owner, he freed the people he enslaved upon hearing a voice interrupt his prayers to tell him, “You must let the oppressed go free.” He became an abolitionist preacher, traveling with these saddlebags as he visited plantations. 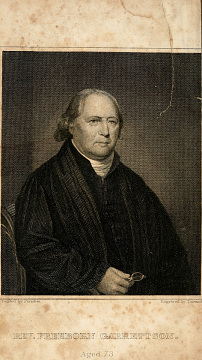 From The Life of the Rev. Freeborn Garrettson 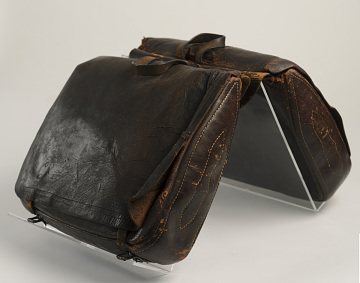 Richard Allen (1760–1831) founded the African Methodist Episcopal Church, established in Philadelphia in 1816. Allen had been enslaved on a Delaware plantation when the abolitionist preacher Freeborn Garrettson arrived and convinced the plantation owner to allow the people he enslaved to buy their freedom. 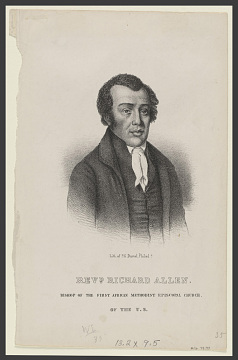 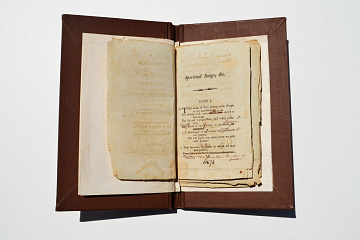 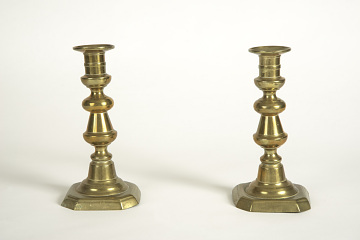 While slavery was often justified with passages from scripture, among its most stalwart opponents were Christians who argued for its abolition on religious grounds. Abolitionists often risked their lives for the unpopular idea that a nation built on forced labor must change its ways and repent. 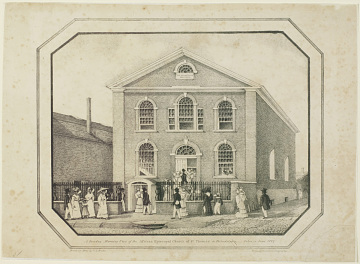 African Episcopal Church of St. Thomas, Founded by the Free African Society in 1792

Courtesy of Historical Society of Pennsylvania

The first Jews arrived in the city then called New Amsterdam in 1654. Though the colony’s governor, Pieter Stuyvesant, hoped they would not remain, the backers of the Dutch West India Company pressured him to let them stay.

Gershom Mendes Seixas (1745–1816) was the first native-born Jewish religious leader in America. As cantor of New York’s Congregation Shearith Israel, he led the synagogue in the Revolutionary era, safeguarding many of its sacred objects during the war. In 1789 he attended George Washington’s inauguration on the steps of Federal Hall. 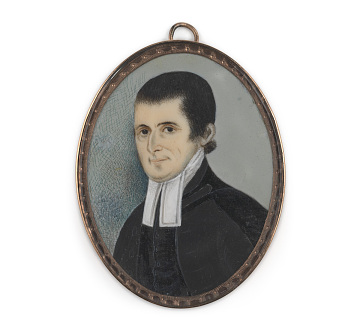 Founded in 1654, Congregation Shearith Israel was the first Jewish religious community in North America, and operated the only synagogue in New York City until 1825. During the British occupation of Manhattan in 1776, Hessian soldiers set the building’s sanctuary on fire, damaging this Torah scroll and making it unfit for ritual use. 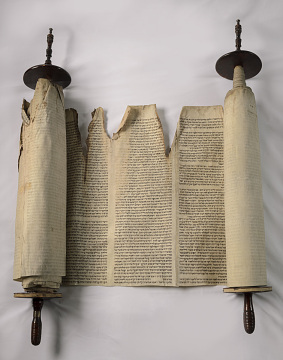 ‹ New England up The South ›