In Ripped Apart, each character’s life is transformed by the war. This was the case for people throughout the country; few were untouched during the country’s bloodiest and most divisive conflict. More than three million Americans saw battle, 529,332 died, and over 400,000 were scarred, maimed, or disabled. 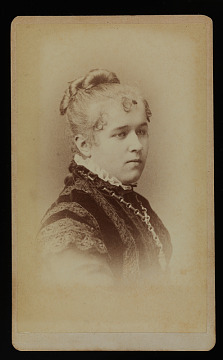 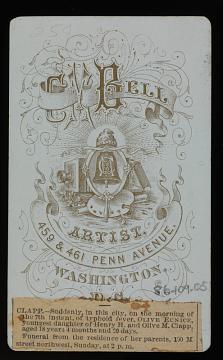 Back of Olive Eunice Clapp CdV

The Julia Dietz character is a composite of two women from the Civil War era, Olive Eunice Clapp and Mary Henry. The image used for the Julia Dietz character is that of Olive Eunice Clapp, a young woman who lived in Washington, D.C. and died of typhoid fever at 18 years old. Other aspects of the story were drawn from another woman featured in the Ripped Apart story as Julia Dietz's friend, Mary Henry. The daughter of Joseph Henry, first Secretary of the Smithsonian Institution, Mary Henry was a young, upper-class woman who kept detailed notes of the events and mood of the city in her personal diaries. Sources of her information came from firsthand accounts from military generals and politicians who frequented the Smithsonian Castle as guests of her father. She had two younger sisters and an older brother.

Many young women’s lives were impacted by the war. This fact is reflected in the game’s Julia Dietz character. Her father supported the Union, while her brother fought for the Confederacy. Julia Dietz’s story speaks to the complicated nature of loyalty during the Civil War. Her family would have been one of many, particularly in the border states, who found themselves divided.

Women and the War Effort

Even families not divided faced difficulties. Millions of men and women left their families and communities to contribute to the war effort. At the time, women were largely excluded from politics, did not have the right to vote, and were not allowed to enlist in the Union or Confederate armies. Yet they made significant contributions to the war effort. The majority of the American population lived in rural areas. Women with husbands and eldest sons fighting the war became their family’s breadwinner. Other women like the Julia Dietz character contributed to the war effort in different ways, such as through the citizen-run Sanitary Commission, which was an organization founded to support sick and wounded soldiers during the war. Women raised money, provided medical care, ran army camp kitchens and lodges for traveling or disabled soldiers. 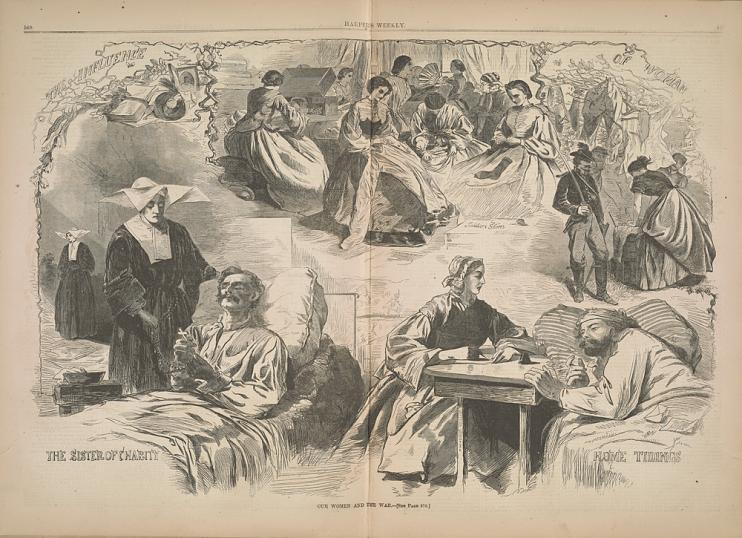 Our Women and the War, Harper's Weekly, September 6, 1862. Courtesy of Smithsonian Libraries.

Photography during the War

As illustrated and discussed in Ripped Apart, cartes de visites (CdVs or cartes) were collected and traded by a wide variety of people during the Civil War era. A person’s CdV album could tell you a lot about them, including their interests, beliefs, and daily life. In addition to contributing to the war effort as a nurse, Julia Dietz was interested in fashion and theater. Given her character’s social position, these may have been diversions to get her mind off the war.

Yet even Julia’s photos of popular actors relate to the war: John Wilkes Booth, Edwin Booth, and Laura Keene. Edwin and John Wilkes Booth were brothers and popular actors. Edwin Booth was pro-Union and well known for being a tragedian, someone who specializes in tragic roles. His brother on the other hand, John Wilkes Booth, was a staunch Confederate who became infamous for assassinating President Abraham Lincoln. The play President Lincoln went to watch that night was Our American Cousin starting Laura Keene. This story illustrates the extent to which the war pervaded and changed the lives of millions of Americans. 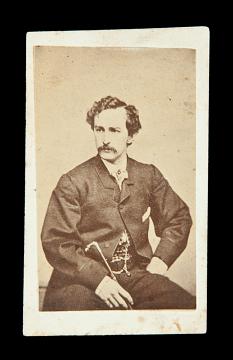 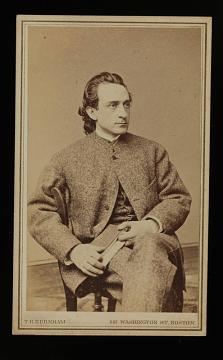