In Ripped Apart, Thomas O’Brien is an Irish immigrant who joins the 1st Delaware Volunteer Infantry to fight for the Union. Over the course of the war, he sees action in battles at Fredericksburg, Antietam, Gettysburg, and Appomattox, where he is shot in the arm.

This character is based on a real person, Captain John W. Barney who joined the same infantry unit and quickly rose in rank—from sergeant major on March 3, 1863 to captain on January 1, 1865. To create the Thomas O’Brien character, common experiences faced by Civil War veterans were layered onto John W. Barney’s story. 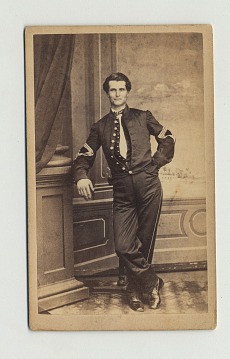 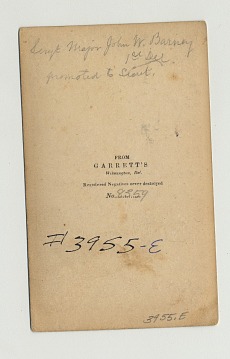 The Thomas O’Brien character in Ripped Apart was born in Ireland and immigrated to the United States. Just prior to the Civil War— in the 1840s and 1850s—over a million Irish citizens left their country to escape starvation during the Great Famine. Many Irish citizens chose to immigrate to the United States. In fact, people from all over the world were immigrating to the United States for a wide range of reasons—ranging from finding new opportunities to escaping persecution. According to the 1860 Census, 13.2 percent (4.1 million people) of the United States’ population was foreign born. Many of these immigrants fought in the war—on both sides—including men from Germany, Ireland, Canada, England, Poland, France, Mexico, etc. There were many regiments that consisted entirely or almost entirely of immigrants from a single country.

Regardless of their home countries, soldiers in the Union and Confederate Armies saw heavy casualties. In addition to the 529,332 who lost their lives, over 400,000 soldiers were scarred, maimed, or disabled during the war. Neither side was prepared to treat and care for the massive number of soldiers wounded in battle. Early in the war, many casualties were left on the field for days before they died or were taken to a hospital. With time, battlefield medicine improved. Both armies developed an ambulance corps, mobile operating tables, field hospitals, and recruited more doctors. Relief organizations like the United States Sanitary Commission played an important role in this effort and led the way for future organizations like the Red Cross founded in 1881. 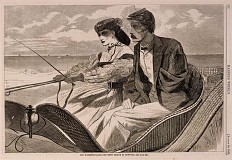 Nevertheless, nineteenth century medical practices left much to be desired. Surgeons probed for bullets with their bare fingers. They stitched bowels together. They neglected to wash their hands or sterilize instruments. Thousands of soldiers died from subsequent infections. Yet thousands survived—maimed, but alive. In the Ripped Apart story, Thomas O’Brien was wounded in battle: shot in the arm just before the end of the war at the Battle of Appomattox Court House. As was the case with tens of thousands of soldiers, his limb was removed to lessen the chance of blood poisoning, bone infection, and/or gangrene. While gruesome, surgeons performed such procedures to increase a soldier’s chance of survival.

Capt. William P. Seville of the 1st Delaware Volunteers describes their regiment’s Surgeon-in-chief David W. Maull: “His conscientious devotion to his duties, his prompt willingness to sacrifice his own personal ease and comfort to relieve suffering, the earnestness with which he studied every case which came under his care, his extended knowledge of prophylactics and therapeutics, his gentle manner and sympathizing voice together with his genial social qualities, all combined to make him what our men with much pride, pronounced a very model of an army surgeon.”

Citizens and soldiers on both sides needed to rebuild their lives, including families who lost their breadwinners and veterans who had been maimed. Veterans who lost a limb were not always able to do the same job they had before the war.  In Ripped Apart, the character of Thomas O’Brien writes to inquire about employment to T.C. Grey, a journalist he met at the Battle of Gettysburg in 1863. T.C. Grey was a real journalist during the Civil War. He was a part of the Bohemian Brigade, a group of journalists, photographers, and artists who reported and provided images of the Civil War to press agencies. The Thomas O’Brien character could not continue working as a cabinetmaker without his right arm. He could, however, ride a horse and learn how to drive a team of animals, which he offered to do for Grey in Ripped Apart.

In addition to its citizens, the United States also needed to rebuild and begin restoring relations between the Union and the seceded states. Lincoln hoped this would be done on the basis of reconciliation, not retribution. He greeted news of General Robert E. Lee’s surrender by asking a band on the White House lawn to play "Dixie." Lincoln hoped that the nation could be reunited without rancor, but he found himself at odds with Republicans in Congress, who wanted more stringent controls over the southern states.

To learn more about the 1st Delaware Volunteer Infantry, read this blog article or a  history of the regiment by William P. Seville. You can also see photographs and stories of soldiers from the regiment like Thomas Smyth on the Museum’s Seville Collection on Flickr. Additionally, you can listen to dramatic readings of the work of Petroleum Nasby (pictured below) at Smithsonian Folkways.

‹ Samuel Perry up The Real Stories ›