The Smithsonian hired architects Beyer Blinder Belle (BBB) to create a plan which would meet our needs. Since the Mall is such a sensitive area in terms of historic preservation, meetings (many) were scheduled with representatives from the National Park Service, the District of Columbia Historic Preservation Office, the Advisory Council on Historic Preservation, the National Capital Planning Commission, and the Commission of Fine Arts. In addition, public interest groups such as the Committee of 100 (Washington’s oldest preservation group), architectural historians, and the National Coalition to Save Our Mall were invited to share their thoughts. BBB not only created a plan but they were so creative in doing so that, in the end, all the commissions and preservation groups approved it.

Basically, everyone agreed that the best solution was not to put up additional barriers, but to use what we had—incorporate existing design features such as raising the height of existing walls to meet the minimum security design requirements. Wherever possible, it was important to incorporate plantings and seating in the plan and, above all, leave space for pedestrian traffic and not close off the museum’s landscape. The museums should continue to be as open and inviting as the Mall. 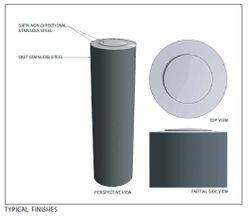 The security around the National Museum of American History was the easiest to design. The building’s stark, elegant exterior lent itself to the installation at vehicle entrances of free-standing and retractable bollards. These sculptural bollards were created in stainless steel, a material used often throughout the building. Perimeter fencing with openings for pedestrian access was installed around the building and existing walls were strengthened. None of these security elements detracted from the from the Mall or the museum.

Posted in Musings, Behind the Scenes