A no-brainer collaboration: "Music for the World of Tomorrow" 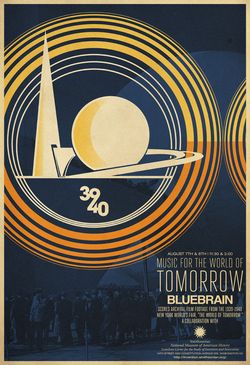 Every time I consider quitting Facebook, a surprising connection keeps me hanging on. That’s how “Music for The World of Tomorrow” became part of the Lemelson Center’s National Inventors’ Month festival, held August 7-8.

Local musicians Ryan and Hays Holladay are Bluebrain. In addition to performing and making records, Bluebrain organizes and stages interactive projects in and around Washington.

After learning about Bluebrain’s innovative work through their Facebook page, I asked Ryan Holladay if the duo wanted to develop a performance for this year's Lemelson Center’s National Inventors’ Month festival, themed around music and sound.

Enthusiastically, Ryan proposed that Bluebrain score a silent film to be screened at the museum. I suggested we start with something from the museum’s Edward J. Orth Memorial Archives of the World’s Fair, 1939-1940, due both to its “eye candy” quality and the role of world’s fairs as showcases for invention and innovation. Archivist Wendy Shay introduced us to the Orth collection’s silent, home-movie footage shot at the 1939-40 New York World’s Fair, a celebration of “The World of Tomorrow.”

The footage is stunning. Recorded originally on Kodachrome film, it has retained its vibrant color and reveals the staggering scale of the Fair. Visitors can be seen meandering through gardens, posing in funhouse-style mirrors, resting by fountains, walking arm in arm, and consulting their maps (paper, not Google).

Amazingly, these films were shot by an amateur, at a time when 16 millimeter cameras were far from ubiquitous; capturing this international event on film was forward-thinking in and of itself.

In addition to revelrous patriotic performances, the World’s Fair footage that Bluebrain selected shows construction of the Trylon and Perisphere, Eleanor and Franklin Delano Roosevelt in color, the Parachute Jump (later moved to Coney Island), synchronized swimmers, dancers, and divers at the Aquacade, and the vast exhibit structures sponsored by Russia, Germany, Italy, and corporations like General Electric. This was a World’s Fair about better living through consumer products.

I invited curator Larry Bird to record a video introduction to precede each Bluebrain performance. Bird placed the World’s Fair in its historical context and told his colorful story of meeting Edward Orth, “an extraordinary collector” of World’s Fair memorabilia, including the films now in the Archives Center.

“Music for The World of Tomorrow,” the culmination of Bluebrain’s work with the Lemelson Center, brought to light a compilation of archival footage that Orth himself may never have seen, according to Bird, because he apparently lacked a film projector. The combined film screening and live, musical performance was repeated four times in Carmichael Auditorium on August 7 and 8 and attended by local and out-of-town visitors of all ages. 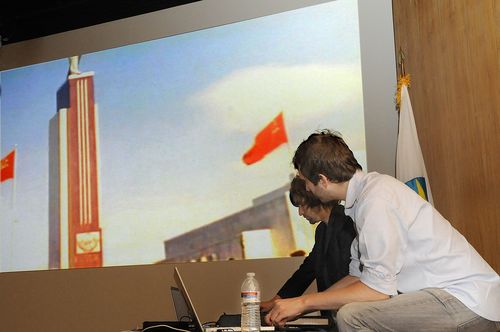 I felt completely energized by the vision and enthusiasm that Bluebrain contributed to the National Inventors’ Month festival, and I hope the museum can do even more cross-disciplinary collaborations with local artists and musicians. Do you have ideas for future programs? Please share them in the comments!

Stay tuned for a blog post by Ryan Holladay, sharing Bluebrain’s perspective on creating “Music for The World of Tomorrow.” For a five-minute video of the performance visit the Lemelson Center’s YouTube page  or watch below.

Amanda Murray is Project Assistant for the Lemelson Center for the Study of Invention and Innovation at the National Museum of American History.