Have you ever wondered why the exterior of the National Museum of American History looks the way it does? 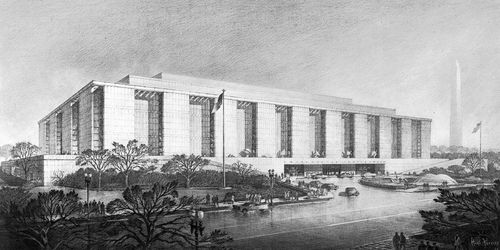 Architectural sketch of the proposed Museum of History and Technology

Originally called the Museum of History and Technology, the building was designed by the architectural firm McKim, Mead, and White to blend the traditional architecture of the National Mall with more modern design to reflect the museum’s technological subject matter as well as its own role as a cutting edge museum. According to a 1988 interview with architect Walker O. Cain, “this [1950s and 60s] was a curious time. It isn’t that modern had taken over or that the traditional had totally relinquished control; the problem was how to resolve the two.” As a result, the building is what Cain describes as “classical in definition, and the detailing is modern.” 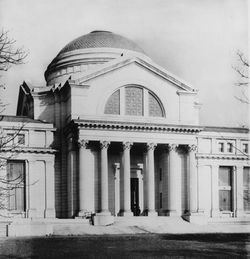 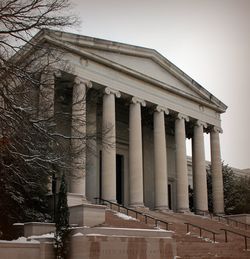 Classical architecture in the style of ancient Greece or Rome is characterized by symmetry, repetition, domes, carved decorations, columns, and large broad terraced bases. Many buildings on the National Mall, like the National Museum of Natural History, the National Gallery West building, the Lincoln Memorial, and the United States Capitol, show this classical influence. The cumulative effect of these designs was intended to create a “monumental core” within the nation’s capital, suggesting legitimacy, splendor, formality, and a firm grounding in history.

Modernist architecture, on the other hand, is characterized by less ornately decorated exteriors, more sheer planes, and abstract shapes. The Hirshhorn Museum and Scultpure Garden and the East Building of the National Gallery of Art are good examples. 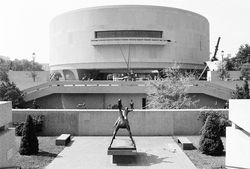 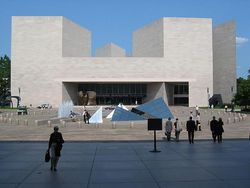 The National Museum of American History features both of these influences. For example, the most distinct feature of the museum’s design is the recessed and projecting bays of the exterior walls. The classical influence on this design is evident in the repetition and symmetry of the bays, which resemble columns like those on the Lincoln Memorial. However, in keeping with more abstract modernist aesthetics, the sheer marble planes merely suggest columns rather than actually forming them. The cornice around the top of the museum is another classical feature, but is also modern in that it breaks from tradition by being supported by horizontal outriggers to create a more abstract “shadow cornice.” Finally, rather than having small windows typically used in classical architecture, the museum features large glass windows, meant to connect the inside of the museum to the outside while providing a view of the surrounding “monumental core” of the city. In these and other features, the classical and modern characteristics combine to create a building that remembers the past while looking to the future. 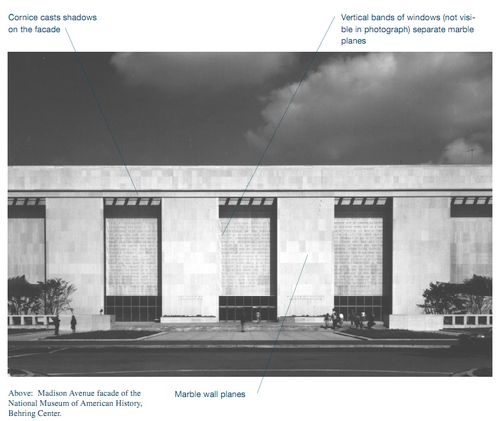 Ben Miller is an intern with the New Media Program at the National Museum of American History.

Posted in Intern Perspectives, Behind the Scenes