Sparked by a photograph, staff member Christopher Wilson discusses his relationship with music that spans the generations.

It's amazing the things you find during spring cleaning. A few weeks ago we decided to take a day to give the museum a good cleanup. We bought pizza, wore jeans, and everyone set to work sprucing up offices, hallways, and storage areas. Working in public programs at a museum often means your office has some strange stuff in it. Besides the requisite reams of old government paperwork, among the more odd things I had to organize: some homemade soap we made for our historic laundry demonstration, a reproduction Civil War rifled musket, and an early hip hop LP from 1986, Uptown is Kickin' It. 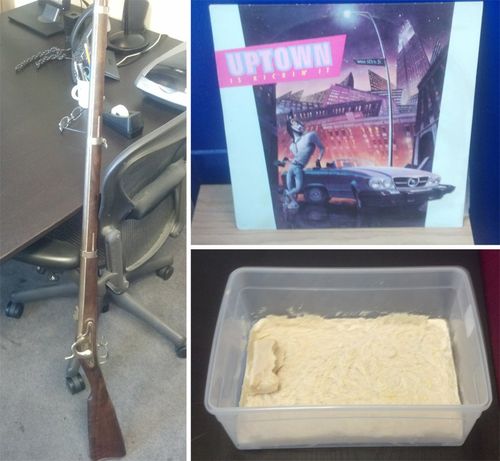 Found in my office: homemade soap we made for our historic laundry demonstration, a reproduction Civil War rifled musket, and an early hip hop LP from 1986, "Uptown is Kickin' It."

As I was organizing the photographs on my desk, one in particular took me back. A couple years ago, the musical group The Carolina Chocolate Drops visited the museum. Curator Stacey Kluck and I saw they were in town and, knowing they were interested in history, contacted them to see if they might want to come and see some of the historic instruments in the National Collection. 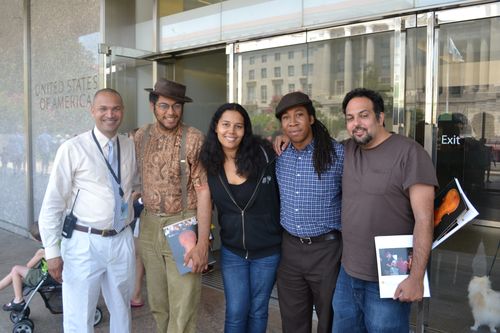 My connection with the group and their music goes back 23 years, before the group even existed. In 1990, I had been out of college for about a year, had just started graduate school, and was enjoying my job at a working historical farm at The Henry Ford in Dearborn, Michigan.

That year, I was given the great challenge and opportunity of acting as the program developer for the museum's first African American Weekend special program. It was great fun and a great experience to develop all aspects of this celebration of history and culture. In the same way as we do at the Smithsonian today, we wanted the experience for visitors to include theatre, food, hands-on activities, and musical performances. I researched a number of historical topics, wrote and directed a few theatrical performances, oversaw our hands-on and craft experiences, worked with the restaurants to offer historic foodways, and then I started on finding appropriate musicians.

After contracting a great jazz band, I was looking for some music that represented an even older style. A colleague who had just finished graduate work in North Carolina introduced me to two musicians, Joe and Odell Thompson, cousins from Mebane, North Carolina, who played banjo and fiddle music that had been passed down through their family, with many of their songs coming directly out of the 19th century.

Joe and Odell were delightful and their performance (some of which you can see here) really gave visitors a chance to travel in time—hearing the same songs that enslaved African Americans might have danced to as they tried to escape for a short time from the backbreaking labor and crushing oppression of a tobacco plantation in the North Carolina Piedmont.

Fast forward about 15 years. A friend said to me, "I just saw this group that sounded just like Joe and Odell Thompson." Slightly incredulous, because I had never seen anyone just like them, I started looking on the internet and was excited to find the Chocolate Drops. I was even more excited when I learned how the group began. They came together after meeting Joe at the first Black Banjo Gathering in Boone, North Carolina, in 2005. Odell had since passed away, but Joe took them under his wing and finally had someone to whom to pass down the tremendous cultural tradition that was preserved inside him.

Joe has now passed away himself, but his story, artistry, and the cultural tradition he represented is carried on by the Drops. At the museum, we carry that tradition forward at the museum by preserving some of the historic instruments on which this music was played. It was a magical moment for all of us when members of the Chocolate Drops performed on these authentic objects in our collection, allowing us to experience the music as it was intended. (Note that we maintain most of our instruments in playable condition and try to have them played from time to time because this enhances their preservation.) You can see here a video shot in one of our collection storage rooms of Rhiannon Giddens performing "Snowden’s Jig" on a late 18th century violin accompanied by Dom Flemons on the bones.

This all came back to me when I came across this photo of The Carolina Chocolate Drops and me as they left the Smithsonian for the next stop on their tour. I was reminded of how special it is to work at a museum and how necessary it is for all of us to play a role in remembering, preserving, learning from, and exalting in our shared history. As I continued to go through old file folders, I put on some traditional string band music and let my mind ramble away like the old song I first learned from Joe and Odell, "Donna Got a Ramblin' Mind."

Posted in Musings, African American History, Music, Behind the Scenes