A near disaster illuminates an 1883 electrical innovation

While cataloging a collection of electrical artifacts, curator Hal Wallace noticed one with an odd burn mark. His curiosity led him to this story.

In the Electricity Collections, we know the big dates in the history of electricity: Samuel Morse's "What Hath God Wrought" telegraph message sent on May 24, 1844. Theodore Maiman's ruby laser's first operation was on May 16, 1960. The afternoon of August 28, 1883 meant little until I stumbled across a small switch and a story of tragedy averted.

The small switch in the museum's collection

William J. Hammer worked for Thomas Edison during the late 1870s and 1880s, the period of Edison's incandescent lamp invention. As a consulting engineer, Hammer traveled around the U.S. and Europe promoting the Edison lighting system. During his career, he also amassed a collection of over 1,000 electrical devices. Much of his collection is preserved at The Henry Ford Museum but, in 1963, IBM purchased part of the Hammer Collection and sent it to the Smithsonian. About 300 objects along with his papers are now here at the National Museum of American History. 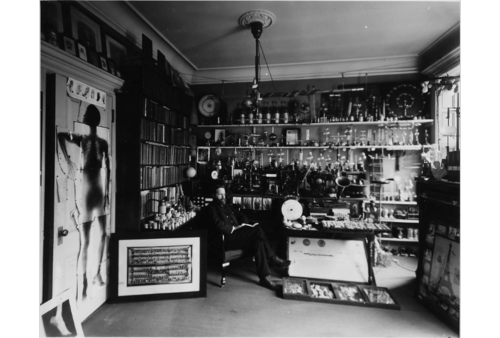 After a recent inventory of objects in the collection, I realized that about 100 of the Hammer items remained uncataloged. Working on the collection, I found a small, electrical switch with what appeared to be a large burn-hole in the side. Curious, I pulled the file and found a document written by Hammer that told the following story of how the switch came to be burned during a high-profile demonstration gone wrong. (The spelling and grammar have been edited for clarity.)

This Electric Attachment Plug was used on August 28, 1883 by the Chief Engineer of the German Edison Company of Berlin, later known as The Allgemeine Elektricitäts-Gesellschaft.

It was attached to a bouquet of flowers which contained tiny Edison lamps which was to be presented to the Crown Princess of Germany (Queen Victoria's daughter). [She and] Crown Prince Frederick William ("Unser Fritz") at that time represented the aged Emperor William (who was too ill to attend) at the International Health Exhibition at Berlin.

The Attachment-Plug was firmly screwed into its receptacle [and] was fastened to one of the supports of The Royal Pavilion [that] had been specially erected at the center of the Exhibition. Just as the trumpets announced the approach of the Royal Party, my assistant Arthur d'Romtra in an excess of zeal turned the plug slightly at the moment the secret police entered and forced him outside. [That left] Director Emil Rathenau of the Edison Company and myself the only ones in the pavilion.

The plug was left loose in its socket. [An electric] arc immediately setting fire to the heavy curtains which blazed up fiercely, I ripped the red hot plug from the switch wall burning my hand. Grabbing the folds of the drapery I succeeded in putting out the flames. Hastily cutting the wires I attached them directly to the main leads so that a few moments later a little blonde-haired girl with a curtsy handed the bouquet to the Crown Princess and everything went off beautifully. Only two persons ever knew what had happened until Director Rathenau later used the incident against me in court when I sued the Company for money I had earned and which was due me as I was about to return to America. He stating, according to my attorney, that "I had endangered the life of the German Kaiser," whereas the German Kaiser was not present. Here was an enormous crowd of many thousands at the Health Exhibition, packed like sardines about the Royal Pavilion and pressing forward to see the Royal Party. One can readily imagine the serious panic which would have resulted had the fire inside the pavilion burst forth and spread [and] been seen by the densely packed crowd outside.

Despite the chaos of the moment, Hammer had the foresight to quietly pocket the small, damaged switch and add it to his collection.

Five years later, the Crown Princess became Empress when her husband ascended the German throne to became Kaiser Frederick III. Their reign was brief though; after only 99 days Frederick died of cancer. Their son, Wilhelm II, then assumed the throne and led Germany during the First World War. Hammer, as Chief Engineer of the German Edison Company, introduced what may have been the first motor-driven illuminated sign at the 1883 Health Exposition.

Even after the passage of more than a century, we can sense that August 28, 1883, was one of the more exciting days in William Hammer's career. While history may highlight electrical success stories, this near-disaster warrants rememberence and, perhaps, a sigh of relief.

Hal Wallace is the associate curator of the Electricity Collections at the National Museum of American History. He has also blogged about artist and inventor Samuel Finley Breese Morse. Researchers may be interested in exploring the Hammer papers in our Archives Center.