Teachers get a high voltage shock from Benjamin Franklin

Education specialist Matt Hoffman shares what happens when teachers and students try out one of Benjamin Franklin's experiments.

Last month, as part of the Smithsonian's Teach-it-Forward Institute, dozens of local educators stood in a circle holding hands. Ring Around the Rosie was not on the itinerary. This was what Steve Madewell of the Lemelson Center for the Study of Invention and Innovation calls the Ring of Fire, an experiment popular in Franklin's day. 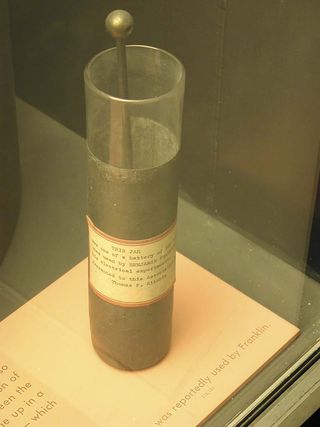 Benjamin Franklin's Leyden jar from the collection, used in the Ring of Fire experiment

Steve led the experiment, rubbing a plastic tube with a paper towel to give the tube an electric charge, which he in turn applied to a water bottle wrapped in aluminum foil with a nail pushed through its cap. 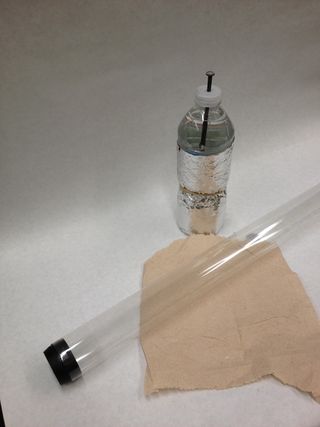 A modern Leyden jar made out of a plastic water bottle, aluminum foil, and a nail

Steve then joined the circle, holding a participant's hand and instructing the participant on his other side to touch the nail on the water bottle to connect the group.

Instantaneously and simultaneously, everyone jolted as they were hit with a high voltage, low amperage static charge. You may think this is cruel, curious, or even comical, but this experiment is serious science. In addition to being a founding father of our country, Franklin was a founding father of electrical science. He used experiments like this to get people interested in science and to learn as much as possible about the nature of electricity, a novel and mysterious phenomenon in the 18th century. 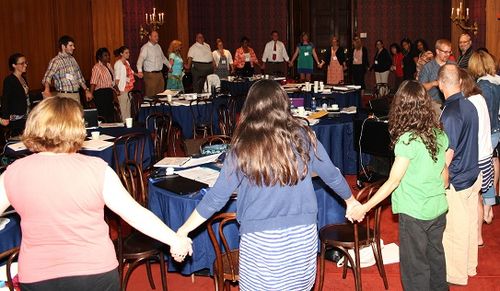 Local educators bravely participate in the Ring of Fire experiment

For many of his experiments, Franklin made use of a device accidentally—and painfully—discovered independently by two European scientists. This device became known as the Leyden Jar, and it allowed Franklin to temporarily store a charge for experimentation. As a result of his experimentation, Franklin made many important discoveries (e.g., the conservation of charge, the lightning rod) and coined phrases we still use today (e.g., positive and negative charge, battery, conductor). 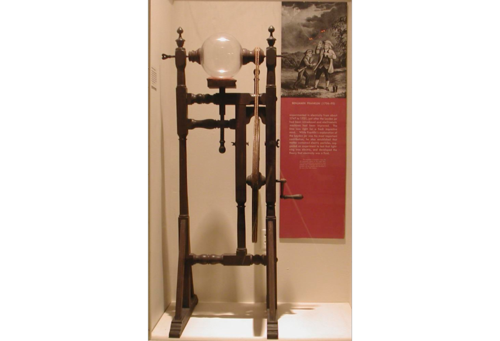 This 18th century electrostatic machine was used to generate static-electric charges for scientific experiments and demonstrations. Made ca. 1750, its design is thought to have been influenced by Benjamin Franklin.

Steve and museum curator Roger Sherman worked together to recreate Franklin's experiments using everyday items. Thanks to their work, you too can easily conduct experiments with a Leyden Jar or even recreate another experiment carried out by Franklin entitled The Conspirators, in which a portrait of King George II is given a gilded crown that delivers a shock to the treasonous.

Cutting edge science from 250 years ago is now the subject of study in elementary and secondary classrooms, where students, like Franklin, experiment to better understand electricity. What better way to teach than with Franklin's example and experiments? Read here for instructions on carrying out the Ring of Fire experiment and here for more Franklin experiments like The Conspirators.

To learn more about Franklin or Steve and Roger's work, listen to this History Explorer podcast with Steve Madewell.

Matt Hoffman is an education specialist at the National Museum of American History.