Lost and found at the Battle of Shiloh: One half of a very fancy denture

Here in the museum's Division of Medicine and Science, we're undertaking an inventory of the museum's dental collection, and we discovered one half of an interesting denture. The upper palate appears to be made of silver and it has eight porcelain or mineral tube teeth. Each tooth has a "central canal" which is secured to the palate with pins. Two teeth are missing. 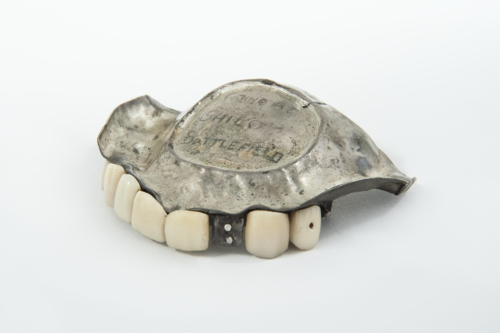 The mystery denture in our collection

The museum's dental collection has dozens of dentures made from these exact materials. What makes this denture interesting are the two inscriptions: In pencil or ink on the top of the palate it reads, "FOUND AT SHILOH BATTLEFIELD"; and etched into the bottom of the palate "FOUND AT BATTLE OF SHILOH".

When curators like myself find a cool object like this, with little identifying information to place it in context, we immediately have a lot of questions. What information can we glean from this artifact? Was it really lost at the Battle of Shiloh? Who lost the denture? What do we know for certain about the denture?

The denture was given to the museum in 1969 by dentist D.L. Crowson of Petal, Mississippi. In a letter to Curator Audrey Davis, Dr. Crowson wrote, "I have no history on this denture except I was told by the person who gave it to me that it had been picked up on the Shiloh battlefield site".

When the Civil War began in 1861, there were few university-trained dentists on either side of the conflict. However, just as now, people suffered from tooth decay diseases that made dentistry as essential on the battlefield as on the home front. The surgical sets supplied to Union surgeons included dental tools for the extraction of teeth. Many of the soldiers who participated in the Battle of Shiloh had probably lost a tooth at some point in their lives, but false teeth would have been relatively rare, especially a denture of this quality. 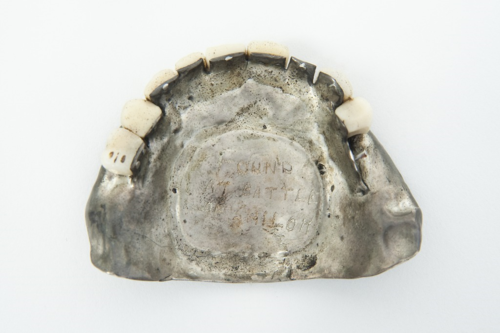 "Found at the Battle of Shiloh"

Porcelain teeth were developed in 18th century Europe and brought to the United States in the early 19th century. The so-called "tube teeth," artificial teeth with a vertical hole in the center cemented to a metal post attached to the base of the denture, were developed in London around 1840 by Claudius Ash. Gold, silver, tin, lead, and eventually gutta-percha, a plastic cultivated from the sap of trees found in Malaysia, were also common materials used to form the palate in the 19th century. That being said, it is possible that this denture was worn during the war, but how can we know for sure?

Technology has given us some new tools to test our objects without harming them in order to do some material forensics. Here at the National Museum of American History's Object Conservation Lab, Conservator Beth Richwine uses an X-Ray Fluorescence (XRF) Spectrometer to determine the elemental composition of different materials. We took the denture to the lab to have Richwine analyze the metal content of the palate. 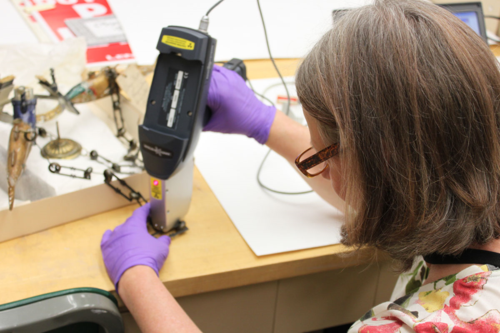 The XRF found the palate was composed of silver, copper, lead zinc, and bismuth. The analysis showed that the palate was probably an alloy known as German silver, predominantly coin-grade silver, but mixed with small amounts of lead, tin, zinc and bismuth. Richwine explained the trace materials would contribute to the malleability of the metal during processing. "This makes sense because they very well could have been added to the mix to help with the forming process of the palate," she reported. German silver was developed by a German industrial chemist named E. A. Geitner in the early 19th century and was often used in dental applications throughout the 1800s.

Therefore, it is very possible, given the materials and its construction, that the denture is from the time of the Civil War.

But questions remain: Who might have worn this, and how did they lose it? In this period, only the well-off could afford dentures, especially those with a high silver content. So we have to assume the owner was probably an officer, someone with the means to purchase dentures. When the average person lost a tooth, they went without; the unfortunate person walked around with a gaping hole.

Despite all of our evidence, we still do not know for sure if the denture was lost at the Battle of Shiloh and are still left with some unanswered questions. We would love to find a diary entry or letter from the time in which someone mentions dropping their denture on the battlefield to solve our mystery, but so far none has turned up. There is also the grisly possibility that this denture was removed from a corpse, but the high casualties (around 3,400 Americans died at Shiloh) make even this theory a difficult avenue for research.

What do you think? Have we missed an angle? Is there any information you can add to help us solve the mystery of the Shiloh denture?

Judy M. Chelnick is the curator of medical and dental instrumentation in the Division of Medicine and Science at the National Museum of American History. Check out some highlights in our dental history collection in this post by Curator Katherine Ott.

Posted in Civil War, From the Collections, Medicine & Science 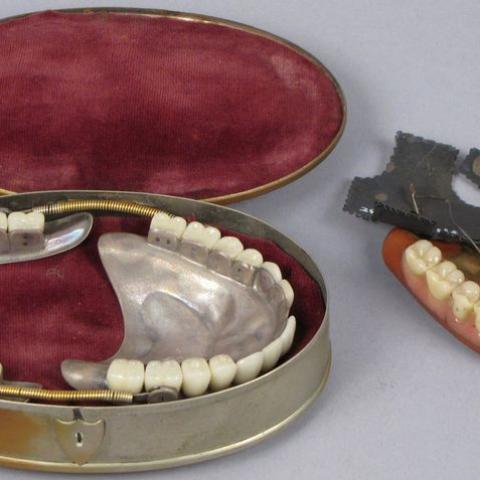