As part of our blog series about the Star-Spangled Banner leading up to Raise It Up! Anthem for America on Flag Day 2014, curator John Edward Hasse shares his insights into an exciting new object in the museum's collections that tells a star-spangled story—as well as many others. 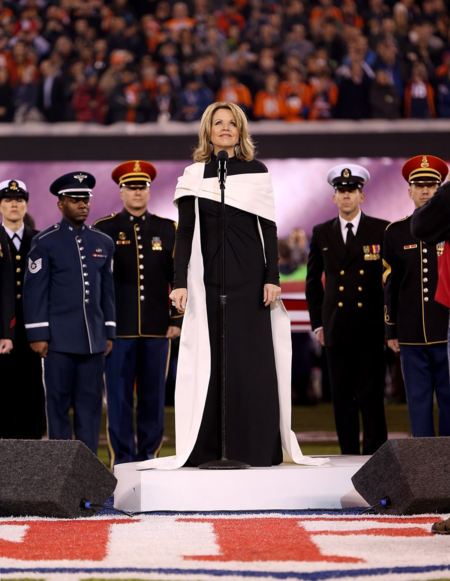 Museum curators love it when an object can tell a significant story. When an object can speak to many different stories, it's a curatorial jackpot. Opera superstar Renée Fleming's gown, which is now a part of the museum's permanent collections, is one of those objects. See it here June 14-July 6, 2014 and consider its many thematic threads.

A voice and personality that shatter stereotypes
Born in 1959, Fleming has made a large impact on the operatic world. After making her big break with the Houston Opera Company in 1988, she has performed with the New York City Opera, the San Francisco Opera, and at venues such as Alice Tully Hall, Carnegie Hall, and the Tanglewood Music Festival. President Obama awarded her a National Medal of the Arts, the nation's top artistic award, in 2012.

She has shattered the stereotype of the opera diva who is lofty, inaccessible, and condescending to pop music. In fact, Fleming has sung not only opera, but also German lieder, chanson, jazz, and indie rock.

Fleming's voice has been described as blending elements of nostalgia and longing that derive from several influences.

"It’s a combination of two musical sensibilities that I have," Fleming reflected. "One stems from my jazz background, because there's a freedom that I've taken from that which I apply to how I turn a phrase. And the second part of that is this concept of tragen, to carry. It's how you stretch and pull a phrase so that you bring the ear along with it, and that is the thing I think more than anything else that creates the concept of longing in music."

Bringing opera to the masses—on Super Bowl Sunday
When the NFL asked Fleming to sing the national anthem at the Super Bowl, many were surprised yet elated—Fleming among them. Her performance marked the first time in history that a classical singer was selected for this American tradition.

"To offer this audience a completely different style of singing from the great pop and country performers of past years was a real departure for them and a great honor and challenge for me," she said.

The broadcast drew the largest television audience in American history: more than 111 million viewers. Suddenly, Fleming was the most famous classical or opera singer in American history. Although the word "opera" went unmentioned in her introduction, instead referring to Fleming as "a Grammy winner and superstar soprano," opera itself certainly gained new audiences through the performance. 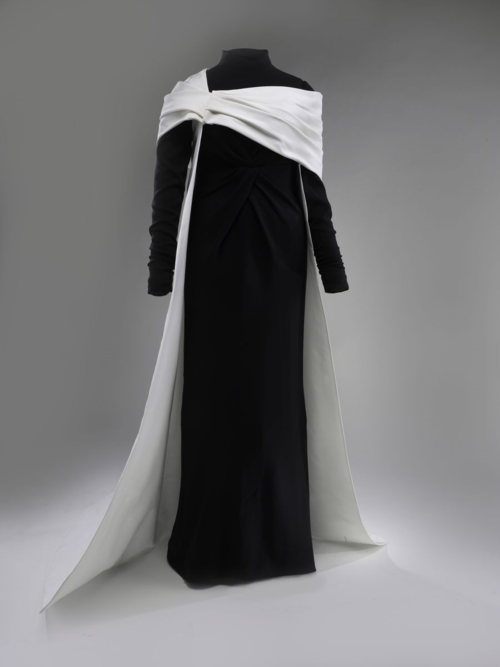 The gown Fleming wore at Super Bowl XLVIII. The multifaceted singer has also led the American Voices festival at the John F. Kennedy Center for the Performing Arts, which brought together singers from opera, classical music, musical theater, bluegrass, rock, and jazz, and has performed with Luciano Pavarotti, Placido Domingo, Elton John, Sting, Lou Reed, Josh Groban, and even the Muppets.

The dress: Sleek, warm, sophisticated
For this performance, fashion designer Vera Wang created a custom-made black, long-sleeve gown with pleated accents at the waist and an ivory silk faille floor-length wrap coat with exposed shoulder and hand-draped detail. Like the hat that another diva, Aretha Franklin, wore when she sang at President Obama's first inauguration, the gown drew mixed reviews but represents a significant moment in the cultural life of 21st-century America.

Fleming recalled of her Super Bowl appearance that, "One of the elements of the performance was the dress." She said, "It had to be dignified, appropriate for the 50-yard line surrounded by players and soldiers and suitable for whatever February in New Jersey might bring. I assumed a coat was in order, but my friend, the great American designer Vera Wang, famous for her impeccable taste and ability to design for Olympic skaters, created the perfect look, and one that was also true to her own sophisticated aesthetic. The gown will always be, for me, a treasured memory of that day. I am delighted that the National Museum of American History has added it to their collection."

Wang shared her thoughts on Fleming's dress with me. She said, "Renee Fleming is my friend, but more significantly, a national treasure. She represents everything a modern woman should aspire to: achievement, hard work, dignity, and grace. The consummate artist role model, mother, wife, and friend."

"The black dress was constructed from a fabric used for athletics, two-way stretch and incredibly comfortable as singing is a very physical act," said Wang. "The weather was a huge concern so the ivory faille capelet was interlined for freedom of movement, and warmth, as a huge snowstorm was actually predicted for that night… How to define an icon of culture at one of America's defining sport events? For me, it was about sleek, no distractions, and a certain subtle drama to both celebrate her talent and the significance of the event for all Americans and New Yorkers as well!"

The dress comes to the Smithsonian
The idea to collect the gown came to me a couple of days after the Super Bowl. The first step was to figure out how to approach Fleming. Luckily, two colleagues offered bridges to Fleming, whom I found extremely down-to-earth. I pitched the idea of donating her gown to the museum, noting that our collection includes dresses from every American First Lady, as well as from opera singer Beverly Sills, Broadway star Carol Channing, jazz singer Ella Fitzgerald, and others, and I invited her to come see them.

She was unsure about letting it go because she had an emotional connection to it and asked if would we like to borrow it. Although I understood her reluctance, I explained that we almost never do incoming loans. Even Michelle Obama made her gown a permanent donation, not a temporary loan. A week later, to my delight, came word that Fleming had decided to donate the gown to our permanent collections, and that she would help the museum celebrate the bicentennial of The Star-Spangled Banner. She visited the museum to record an interview for a Smithsonian Networks documentary and a public service announcement about the national anthem.

One object, many stories
Beyond opera, Fleming's gown also speaks to other themes explored by the museum. It connects to the fluid, dynamic, boundary-breaking—even mash-up—character of American music. It evokes not only the national anthem, the flag and battle that inspired it, the patriotism it inspires, but also the setting of the Super Bowl, America's biggest moment in sports, and the importance of television in mass culture. The gown, the work of a Chinese-American designer, speaks to couture fashion, the nature of 21st century celebrity, and what it means to be a "diva" today. What a rich nexus in a single museum object!

Posted in From the Collections, Star-Spangled Banner, Women's History 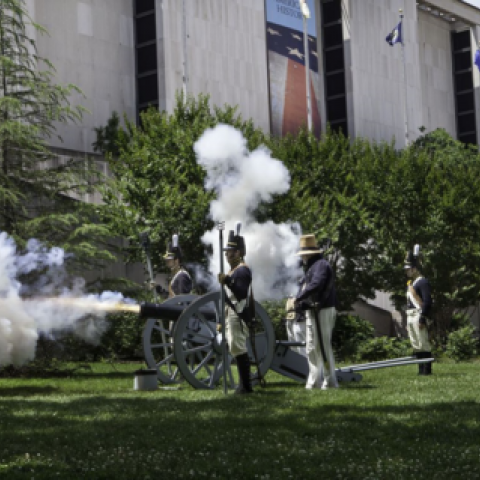 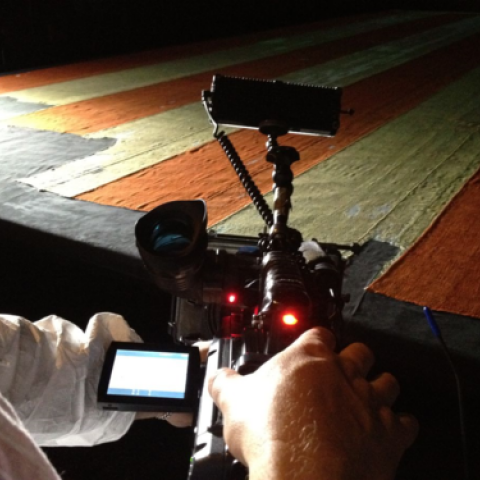 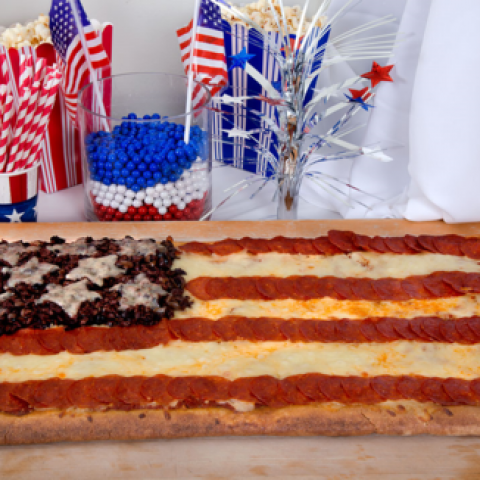 Starry snacks and sips to help your Flag Day guests Raise It Up!
This summer, we're celebrating the 200th anniversary of the Star-Spangled Banner with Raise It Up! Anthem for America. On Flag Day,...