From electric hairbrushes to toning sneakers: Absurd advertising for over 100 years

Although many of the products that Americans consume today would have been unimaginable to our forebears, the means by which they are advertised have remained relatively constant since the late 19th century. Intern Oliver Stabbe from the Division of Medicine and Science gives us a glimpse into the relationship between inventors, advertisements, and consumers since 1872.

In my short few weeks working here at the museum, I have been scanning old advertising materials. Since I interned in the Division of Medicine and Science, the focus of my archiving relates to medicine. I scanned 19th and 20th century product labels, postcards, medical licenses, and other artifacts. 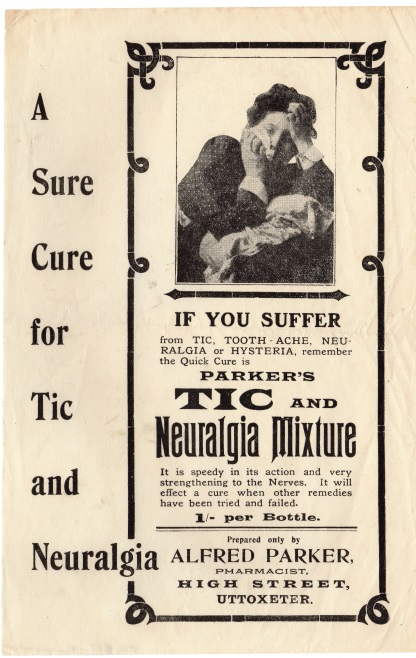 An advertisement for medicine that will cure toothaches, neuralgia, and hysteria

What I find most fascinating is not what the documents contain (though the gorilla-faces and other materials are very interesting as an entity), but how inventors convinced masses of people to buy their inventions. The advertisements reflect the medical paradigms of the times and demonstrate new creations and information that would supposedly better peoples' lives due to scientific development. Speaking from a modern perspective, some of the equipment and medicines seem questionable and in some cases, even ridiculous. I can't help but wonder what my great-grandparents would have thought and whether they were persuaded by the grandiose claims of inventors. Looking at some of these documents, I find the blatantly misleading material in a few of them puzzling and a little unsettling. 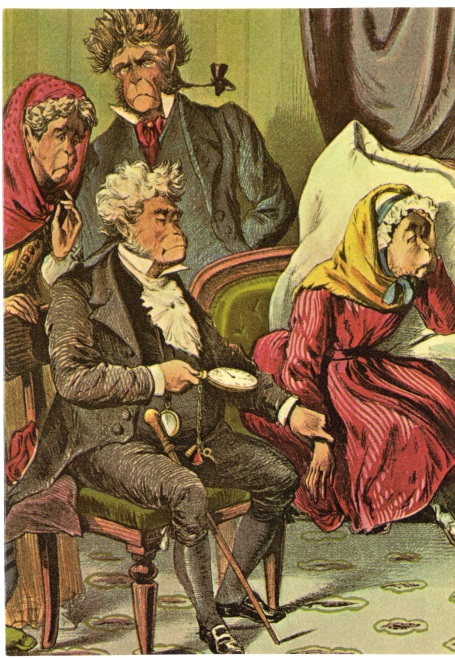 A postcard depicting gorillas in fancy attire. The back prints a rhyming poem about a sick, fictitious Miss Pugg

An example of the creative advertising in question is the Electropathic Belt, introduced by Cornelius Bennett Harness in 1885 when the use of electricity was still a fairly new and fascinatingly strange technology with seemingly endless possibilities. Harness claimed that the belt's alternating intensity would cure "nervous exhaustion, neuralgia, rheumatism, indigestion, sleeplessness, [and] ladies' ailments" in his advertisements, thus generating an initial overwhelmingly positive reception for his miracle belt. After a few consumers complained of the belt's magical ability to chafe and nothing else, the medical claims of Harness were scrutinized.

Mr. Simmonds, the doctor backing up the miracle claims of the belt, had not received any legitimate training and was not a bona fide doctor. After an investigation by real scientists, it was found that Harness's belt was unable to help anyone's health in any capacity. The Electropathic Belt was merely alternating disks of zinc and copper, connected by a non-electrified string of copper. The public felt entirely duped by Harness. In 1894, the phony inventor was forced to cease selling his belt. 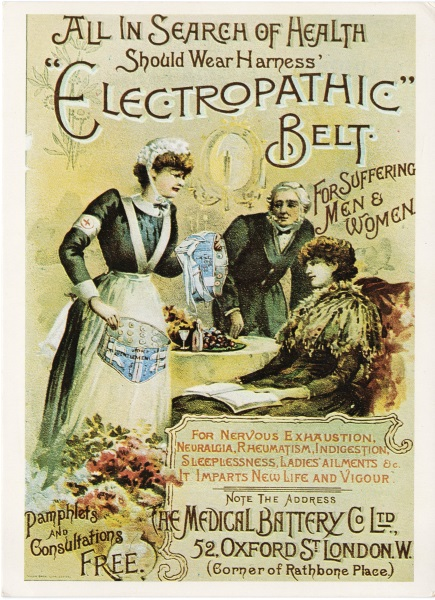 Another invention that many of us today would find ridiculous was the Electric Hairbrush, patented by Dr. Scott in 1872. The brush had slightly magnetized iron rods in their handles, which Scott claimed had therapeutic abilities to fix baldness, nervous headaches, bilious headaches, and neuralgia. The brush quickly became financially successful, thriving via large scale advertisements such as the image below. 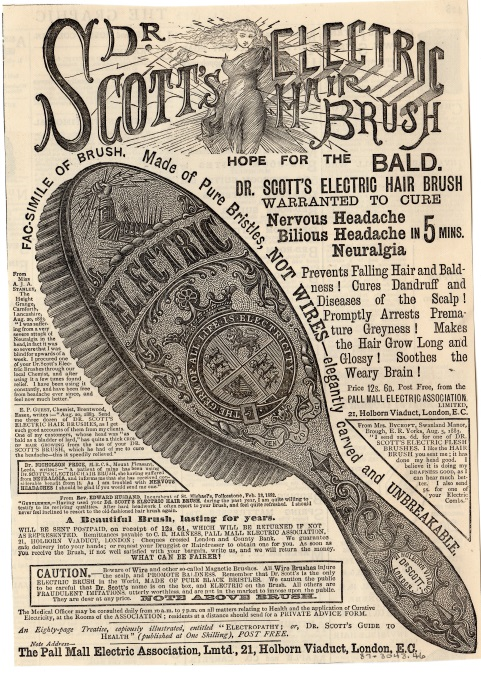 An advertisement for Dr. Scott's Electric Hairbrush that claims it would treat any ailments in or on the head such as headaches and baldness

Dr. Scott's most absurd yet financially successful way to sell more brushes was to claim that no more than one more person should use the brush so that it may "[retain its full curative power]". By telling the public that no one should share their brushes and everyone needed their own, Scott potentially increased his sales tremendously. This method is equally ingenious and ludicrous.

These strange advertising cases make me think about how we as a society have created new standards for health, safety, and validity. Agencies like the Food and Drug Administration monitor and work to prevent false claims and fraudulent devices like the Electropathic Belt or the Electric Hairbrush from harming consumers. We might like to think we are free from miracle products in our era of regulation, but can we really say we're entirely immune?

The recent revelations about the ineffectiveness (and sometimes dangerousness) of body toning footwear and apparel are modern-day examples of advertising false medical claims. For example, according to CNN, Skechers Shape-Ups were advertised as shoes that would "help people lose weight, and strengthen and tone their buttocks, legs and abdominal muscles." Advertisements for Skechers Shape-Ups, starring Kim Kardashian, were shown frequently during the 2010 Super Bowl. All did not go as planned, however. The shoes were found to be associated with stress, hip, femur, foot, ankle, tibia, fibula, pelvic, head, joint, back, neck, and Achilles tendon injuries. In the end, Skechers agreed in court to pay a $40 million settlement to the Federal Trade Commission and had to send 509,175 refund checks to the purchasers of Shape-Ups and other so-called toning shoes.

Though we can say we are safer from these unregulated devices, are we really beyond fooling by advertising? We live in an era of constant media and screens, bombarded from every angle with advertisements and materialistic wants. If anything, we are exposed now more than ever to manufacturers and opportunities to manipulate. We are, however, more aware of the potential dangers of the internet and media than we were in the past. One hundred years from now, will people look back at our marketing strategies as a scam, the same way we do?

Oliver Stabbe was an intern in the Division of Medicine and Science in spring 2014 while a student at Sidwell Friends. He will be attending the University of Rochester in the fall.