The search is over! Smithsonian announces the five FFA jacket donors

What do a former U.S. president, a spotted hog raiser, two former teachers, and a librarian have in common? They're all FFA (formerly known as Future Farmers of America) members whose lives and careers have been shaped by agricultural education and who have generously donated their jackets to the museum for inclusion in the upcoming American Enterprise exhibition.

Intern Chris Fite reports on the men and women behind the jackets, but before he does, don't forget that we're still collecting your personal stories of youth agricultural education on our Agricultural Innovation and Heritage Archive.

Video of the donation ceremony, also available on YouTube

U.S. President Jimmy Carter
While his later career as a state senator, governor, the 39th President of the United States, and a global peacemaker is well-known, some might be surprised to learn that President Carter's distinguished life and successful career are rooted in the trials and challenges of agricultural life. 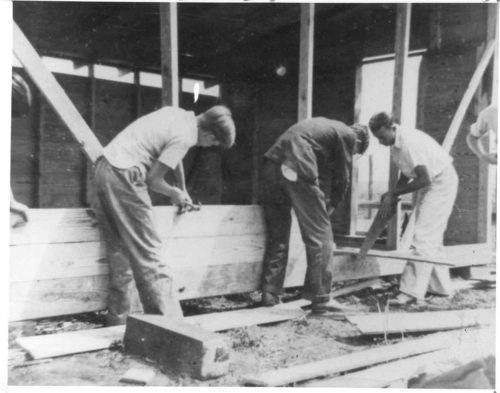 Born 1924 in the rural town of Plains, Georgia, Carter grew up on a farm in the nearby Archery community. In his memoir, An Hour Before Daylight, Carter wrote that throughout decades on a national and international stage, he has not forgotten the formative experiences of his childhood, including his agricultural education.

He reflected on the challenges his family faced as American farmers and how they worsened with the onset of the Great Depression. Carter also recalled his time as an active FFA member and officer in the Plains High School chapter and remembered how his agriculture teacher talked to the parents to make sure the curriculum provided the skills needed on family farms. 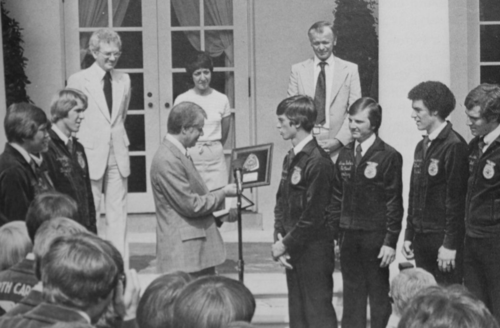 Carter went on to graduate from the U.S. Naval Academy, eventually joining the Navy's new nuclear submarine program before returning to Plains to manage Carter Farms with his wife, Rosalynn, shortly after his father's death in 1953. It was in Plains that his political career began with his community involvement surrounding the Brown v. Board of Education decision. 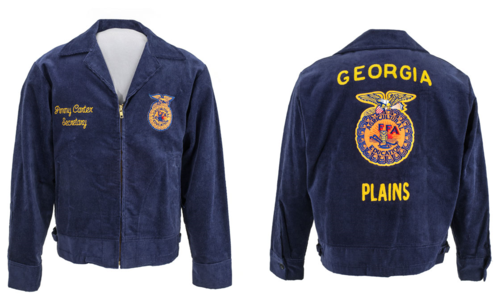 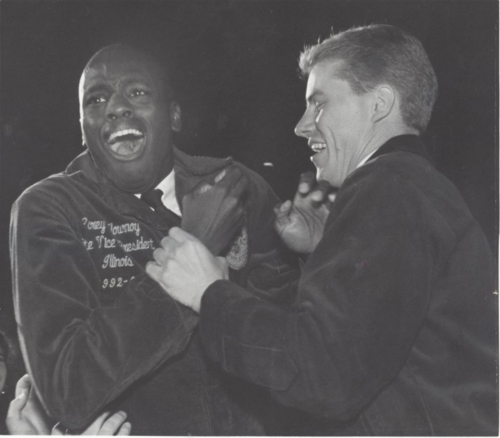 Corey Flournoy shocked with joy after being elected president of the FFA at the 67th National FFA Covention in Kansas City, MO in 1994

While farming might not come to mind when you think of Chicago, Corey Flournoy's accomplishments prove the impact and value of youth agricultural education, even in an urban setting. Flournoy became involved in FFA after starting at the Chicago High School for Agricultural Sciences, which boasted a 40-acre farm and one of the largest FFA chapters in the nation. After numerous FFA leadership positions in high school, Flournoy studied agricultural and consumer economics at the University of Illinois and, in 1994, became the first African American national FFA president and the first from an urban chapter. 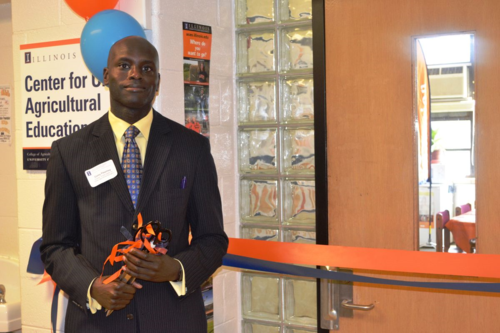 Flournoy credits FFA with introducing him to a wide variety of agricultural careers and pays it forward through his role as founding director of the Illinois Center for Urban Agricultural Education, a partnership between the University of Illinois and Chicago Public schools with the mission to introduce students to careers in agricultural, consumer and environmental sciences. 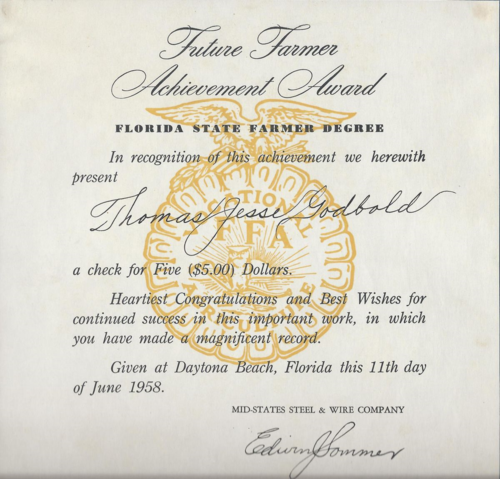 Future Farmer Achievement Award given to Jesse Godbold in 1958

A native of Suwanee County, Florida, Jesse Godbold has served his local agricultural community for over half a century. Whether it has been as president of his high school's FFA chapter or in his current role as Clay County Farm Bureau board member, Godbold's agricultural roots run deep. 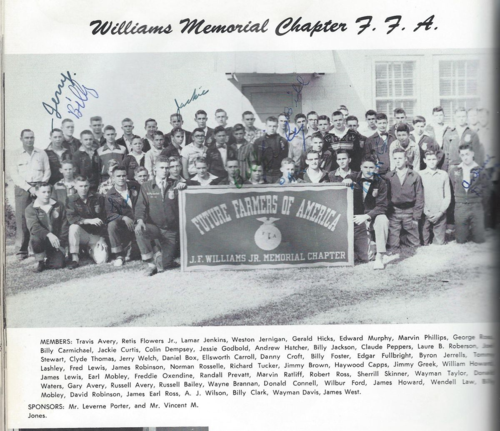 Graduating with a degree in Agricultural Education from the University of Florida, Godbold went on to teach high school vocational agriculture before joining the Florida Cooperative Extension Service where he served as Clay County's extension director for 25 years. During his tenure, Godbold revived the defunct county cattlemen's association, started a local foundation to support 4-H programs, helped organize the county agricultural fair, and helped plan the 50-acre Clay County Agricultural Extension Center and Fairgrounds Complex.

Not only has Godbold dedicated his career to supporting farmers, but he also counts himself among them, maintaining a family farm in Wellborn, Florida. The farm has been under continuous family ownership for over 100 years.

Her success continued while at the University of Wisconsin—River Falls, where she had the distinguished honor in 2002 of being the first female to be named "Star Farmer." As the highest award an FFA member can receive, "Star Farmer" recognizes the nation's top Supervised Agricultural Experience (SAE). For hers, Krueger raised Spotted Poland China hogs, a breed having difficulty in the swine industry at the time. 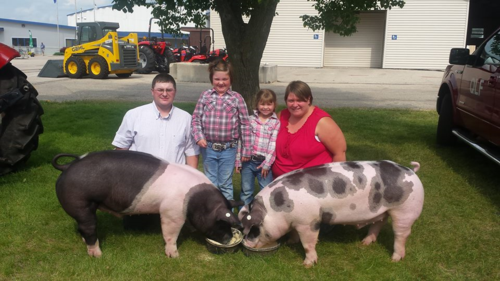 Karlene Lindow Krueger and her family

Utilizing her years of experience in swine production with FFA, Krueger now manages Krueger Farm with her husband where they raise purebred Duroc, Hampshire, and Spotted hogs. She also works for Dairyland Seed, a company specializing in seed research and production.

Mary Louise Reynnells
A native of San Bernardino, California, Reynnells attended Pacific High School where she recalls FFA being such a huge part of school life that a large "F-F-A" marked the hillside. Joining to explore her interests in botany and animal science, she was voted "Chapter Sweetheart" in 1977. She received a special white jacket and served as host at chapter events. Before 1969, FFA restricted membership to boys and "Chapter Sweetheart" was an honorary position and the only option available to girls. However, as a student in the 1970s, Reynnells was able to participate fully, serving in leadership roles such as treasurer, president, and delegate at the state convention. 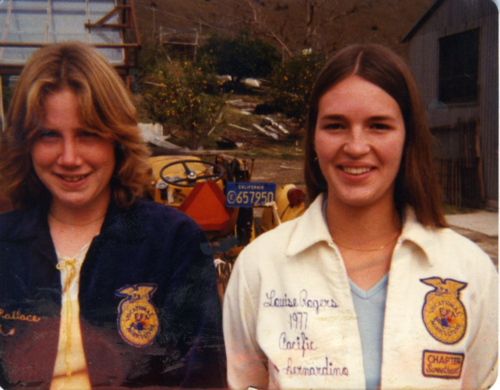 Reynnells graduated from California State Polytechnic University at Pomona with a degree in animal science. She currently works as a Technical Information Specialist at the USDA National Agricultural Library. She has served the agricultural community for nearly 30 years and was part of the team that developed Start2Farm.gov, an information clearinghouse for new farmers and ranchers. Reynnells says that the leadership skills she gained in FFA have served her throughout her career.

Reynnells has also blogged about her experience in FFA on the U.S. Department of Agriculture blog. 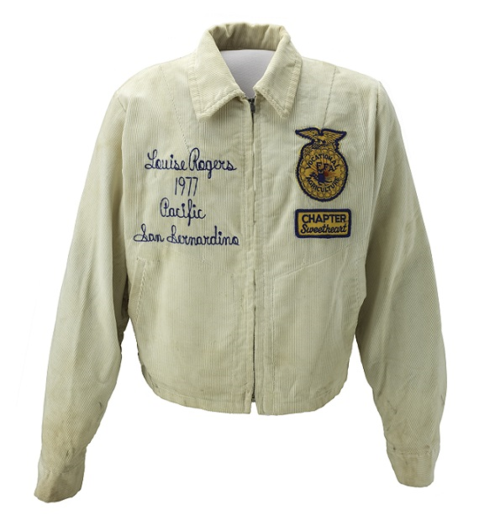 Chris Fite is an intern in the Division of Work and Industry. He is a graduate student in Public History and Library Science at the University of South Carolina. His research interests are in environmental and agricultural history.

The American Enterprise team would like to thank FFA for their help in supporting the jacket collecting effort as well as all five donors. 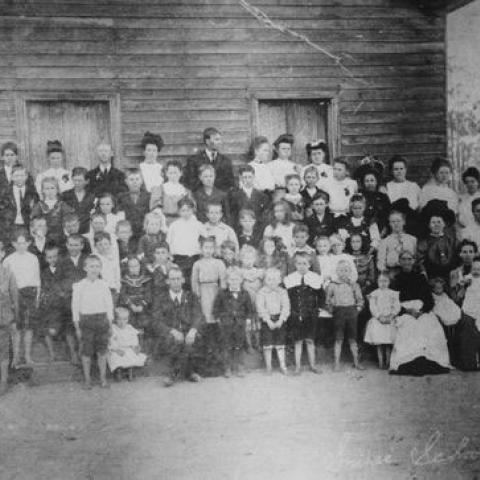 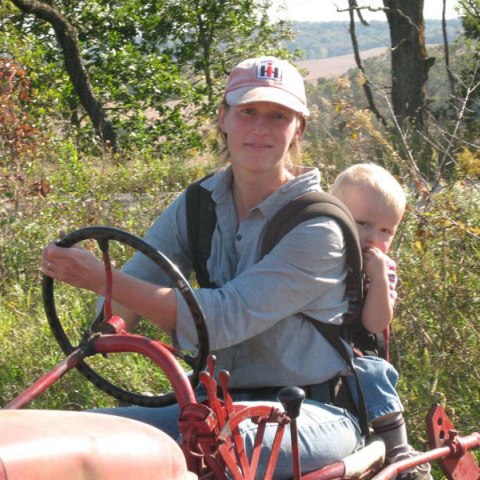