Earning a place on the dial: Raoul Cortez, KCOR, and Spanish-language radio

But it wasn't always this way. In the 1940s and 1950s, Hispanic entrepreneurs had to fight for space on the U.S. radio dial. As part of the recently opened American Enterprise exhibition in the Mars Hall of American Business, curators collected a group of objects, images, and documents to capture this foundational period in the broadcasting business. These new acquisitions chronicle the history of KCOR, one of the nation's first full-time, Spanish-language radio stations, as well as the life of its trailblazing founder, Raoul A. Cortez.

Born in 1905 in Jalapa, Veracruz, Mexico, Cortez grew up in a media-savvy family, with a father who owned a radio station in Laredo, Mexico. In the 1910s, during the early days of the Mexican revolution, Cortez's family emigrated to the United States. Cortez eventually moved to San Antonio, Texas, where he took on a number of different jobs, including working as a reporter for La Prensa, a Spanish-language daily newspaper.

Cortez began his career in broadcasting through what was called the "broker system," purchasing blocks of time on local stations for a flat fee and then re-selling time slots to performers and advertisers. Cortez had already been working as a booking agent in San Antonio, scheduling theater shows for Mexican musicians and other performing troupes. Now, he could put performers on the air. But while the broker system created a small space for Hispanic artists on the radio, Cortez continually struggled to win his Spanish-language programs more airtime on the city's established, Anglo-owned stations.

In the early 1940s, Cortez decided to strike out on his own and build a new, independent Spanish-language station. However, creating a radio station from scratch was no easy task. Cortez discovered that licensing and funding a Spanish-language station was doubly difficult. His first challenge was getting approval from the U.S. Federal Communications Commission (FCC). During World War II, many Americans feared that non-English radio could be used to spread seditious messages, and the FCC enforced strict controls over what was allowed to go out on the airwaves. Undaunted, Cortez turned these restrictions to his advantage. His 1943 application argued that a new, full-time Spanish language station would help the U.S. win support for the war effort among Spanish-language speakers. Cortez's appeal seems to have worked, as the FCC issued him a license in 1946.

On February 15, 1946, Cortez launched his new Spanish-language station, KCOR, at the frequency 1350 AM. From the beginning, the small station faced a number of obstacles, the largest being advertising sponsorships. Many local retailers in San Antonio believed that Mexican Americans lacked the economic resources to be good consumers, and national brands were unwilling to risk buying advertising time because there were no audience ratings for Spanish-language radio; in other words, national advertisers could not tell how many people were listening.

Cortez and the rest of KCOR's staff tackled this problem in a variety of ways. Cortez made selling the station a priority, hiring several dedicated salespeople and employing a private audience survey firm to count KCOR's listeners. KCOR's announcers also asked their listeners to send in box tops, product labels, and empty containers as proof that they purchased nationally-branded products.

To fill an entire day of airtime, Cortez employed a dedicated group of actors and writers to create variety shows and original novellas (serial dramas) for the station. While KCOR's announcers followed the format of many English-language radio station in the 1940s and 1950s, the station emphasized the top songs and artists from Mexico, increasing the profile of Spanish-language music in the United States. Cortez also broadcasted African American-focused programming in the late night hours after 9:30 p.m. He sold the station in 1960 to Inter-American Radio owned by a group of Anglo media investors.

In the years that followed, Cortez expanded his broadcasting business. By the mid-1950s, television was big business. In 1955 two thirds of American households had a set. On June 10, 1955, Cortez launched his company into America's booming television business with KCOR-TV, the first Spanish-language TV station owned by a Hispanic in the continental U.S. In 1961, KCOR-TV became KWEX with the sale of the station to Emilio Nicolas Sr., Raoul Cortez's son-in-law, and a group of investors. Today, both KCOR and KWEX are a part of the Univision network. Thanks to the generosity of the Cortez and Nicholas's families, as well as the Univision network, the story of KCOR is now a part of the collections at the museum.

Visitors who would like to learn more about Cortez, KCOR, and KWEX-TV can visit the American Enterprise website.

Jordan Grant is a New Media Assistant working with the American Enterprise exhibition.

Posted in Business History, Latino History & Culture, From the Collections 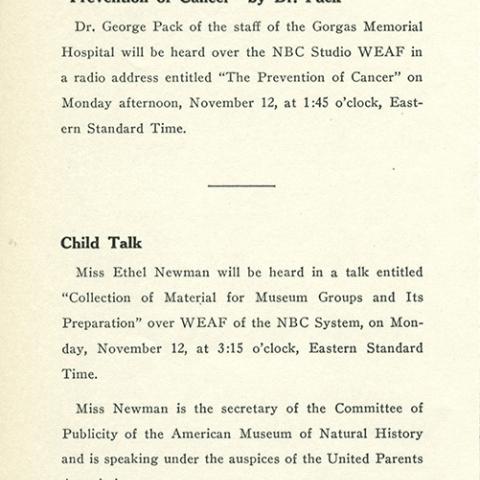 Next on your radio dial, 15 minutes of healthy talk
At the first sign of symptoms, many people turn to the Internet for health advice. Early listeners to radio could turn their dials and...