Like many young men during World War II, Calvin Curtis and his fraternal twin brother, Clarence, were drafted in 1943. They were juniors in high school in San Antonio, Texas, from a farm family. Calvin believed they would be going into the army, but at the end of the day he and Clarence were the only men left at the recruitment center and found themselves slated for the marines. This meant a train and bus ride to boot camp on land at the Northern tip of Camp Lejeune, North Carolina, known as Montford Point.

Montford Point was the U.S. Marine Corps' reluctant answer to Executive Order 8802, issued by President Franklin D. Roosevelt on June 25, 1941. In EO8802, the president declared that all branches of the military, without exception, must admit African Americans to their ranks. Since 1778 the marine corps had limited service in their ranks to "whites only," a category which included Asians, Native Americans, and Latinos. However, an order was an order; the marines complied, and the first recruits entered the gates of Camp Montford Point on August 26, 1942.

Basic training at Montford Point mirrored training at Camp Lejeune, but the accommodations were substandard at best, primitive at worst. The camp offered shoddily-built barracks and inferior equipment and it completely lacked recreation facilities. All the training officers and drill instructors were white. White drill instructors were eventually replaced by Black instructors due to the need for white Marines in the Pacific. The lack of Black officers ensured the leadership remained all white.

The Curtis brothers’ journey to Montford Point consisted of two parts: a train ride from San Antonio to Jacksonville, North Carolina, and then a bus ride from Jacksonville to Camp Lejeune. According to Calvin, the trip was uneventful; nonetheless, the Curtis brothers likely encountered the Jim Crow South’s endemic racism. There were no sleeper cars, and Black passengers had no access to the dining car. Segregated stations offered white passengers access to food and other services, but African Americans—even men in uniform—could not find a sandwich and a cup of coffee.

Once at Montford Point, Calvin was assigned to the 264th Platoon, and Clarence was assigned to the 265th. Boot camp concluded in November of 1943, and for their two weeks of leave the brothers went home to San Antonio. This time, on the train trip back, they were wearing the uniforms of United States Marines.

When their leave ended, the brothers returned to Montford Point. There, Calvin learned he would ship off to Hawai`i, to be part of the Fifth Marine Ammunition Company, which was responsible for guarding the ammunition dump on the island of Maui. Newly formed Black marine companies did not go to combat. They, like almost all Black troops, were assigned non-combat duties due to the prejudiced belief that they would abandon their posts under duress. Calvin took the troop train to Norfolk and embarked on a ship with 4,000 other Marines under the cover of darkness. After sailing through the Panama Canal, they were escorted by a convoy of 12 ships, arriving in Hawai`i in June of 1944.

Calvin and Clarence spent the rest of the war on the islands of Maui and Kauai. Their orders to participate in the invasion of Japan in August 1945 were cancelled on August 6, the day U.S. forces dropped an atomic bomb on Hiroshima. They also did not receive orders to go to Japan as part of the occupational forces. They were discharged on April 20, 1946. Calvin left the marine corps and returned to San Antonio, where he finished his degree at Phyllis Wheatley High School in 1947 before attending Saint Phillips College. He received his Associates Degree there in 1949. Calvin made a career in the United States Postal Service; his brother  Clarence joined the Air Force after the war.  Clarence passed away in 2001 and Calvin in 2013.

Montford Point was decommissioned on September 9, 1949, in response to Executive Order 9981. Signed and issued by President Harry Truman, EO9981 called for the complete desegregation of the Armed Services. By the time it was decommissioned, 20,000 Black recruits had come through the gate as raw recruits and left as United States Marines. In 1974, Camp Montford Point was renamed Camp Gilbert H. Johnson, after Sergeant Major Gilbert “Hashmark” Johnson who was one of the first Black drill instructors.

On December 11, 2012, at Fort Sam Houston in San Antonio, Texas, Calvin Curtis was presented with a copy of the Montford Point Congressional Gold Medal, which had been authorized by Congress on November 23, 2011. The medal was bestowed upon him for his part in the beginning of the desegregation of the United States Marine Corps, the last branch of service to accept Black recruits.

Calvin Curtis died not long after receiving his copy of the Montford Point Congressional Gold Medal. In 2021 his son, Todd Curtis, donated some of the objects featured here (along with other items related to Calvin and Clarence's military service) to the museum. The brothers' materials offer a rare window into the experiences of the Montford Point marines. 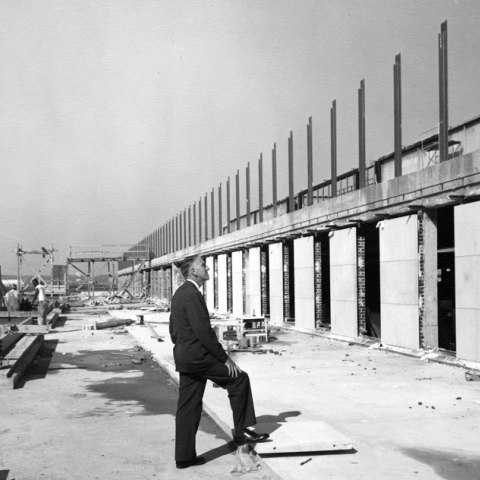